Today's item comes to you (and me) courtesy of Candy German, who included it in a sample box that they sent me (that's my way of saying I got this from them for free).

Recently, I made a British comfort food called a "jam roly poly". I chose this because I encouraged my husband to buy some low sugar jam in a moment of early cognitive failure. You see, I'd forgotten that he likes everything much sweeter than me and I felt that, if I liked the jam, he might, too. While searching for recipes that use up jam, I came across the roly poly recipe which not only uses up jam of substandard sweetness, but it also is fairly simple and uses ingredients that most people who aren't eating out of processed food packages and take out containers would have on hand.

The jam roly poly ended up being a roll of dough which is a cross between a shortbread cookie and pie crust with jam slathered on it. It's not a sophisticated offering, but it has a certain quality to it. British folks tend to eat it with warm custard, but I don't live in a culture which sells Bird's Custard Powder on most shelves so I'd have to go to much greater lengths to produce custard. I figured I'd just put whipped cream on it if all else failed. Incidentally, Bird's Custard Powder doesn't really make custard as it contains no eggs. It's pretty much a type of instant pudding mix stuff. It was invented by a man whose wife was allergic to eggs. When I found this out, I was disappointed in the British for not proving to me that they had invented a way for me to magically whip up a lovely and relatively authentic custard with a powder. I expect more of them than I do from Americans, like the ability to create rich and tasty authentic custard by adding liquid.

I'm not really big into cookies or pie, and I was using strawberry jam which I'm also not keen on. I expected that my husband would like it better than I, but the result was like a giant Pop-tart (at least when it's warm and fresh). The textural element of the crust was an utter delight as it hit the sweet spot between crispy exterior and tender interior in a way I would not have expected. So, while I wasn't crazy about any of the component parts, that texture just lured me in and I ate more than I'd planned. This was a good thing because it turned out that the whole thing failed the sweet test for my husband again and he didn't really want any.

I've mentioned before that I'm a food texture junky and today's item, like the jam roly poly, wins me as much on texture as taste. When I develop a craving, it's often based on wanting the texture of a food rather than the taste. That leads me to this Pick-up cookie. I'm not a fan of caramel, and this doesn't have oodles of chocolate flavor, but the combination of the texture of the crispy biscuit outside, the thick, cool, and somewhat snappy chocolate interior and the sticky caramel comes together for an experience in textures with some depth. Don't get me wrong about the taste. The cookies are sweet, nearly enough for the likes of my husband, but the chocolate filling (which is ample) is milk chocolate so it's smoother and less pronounced than dark or bittersweet options. The caramel is a subtle undertone unless you're eating one of the edge bits that has caramel ooze saturated its corners. That's actually a pretty nice bit because it changes the flavor balance and the buttery caramel notes come through more strongly. 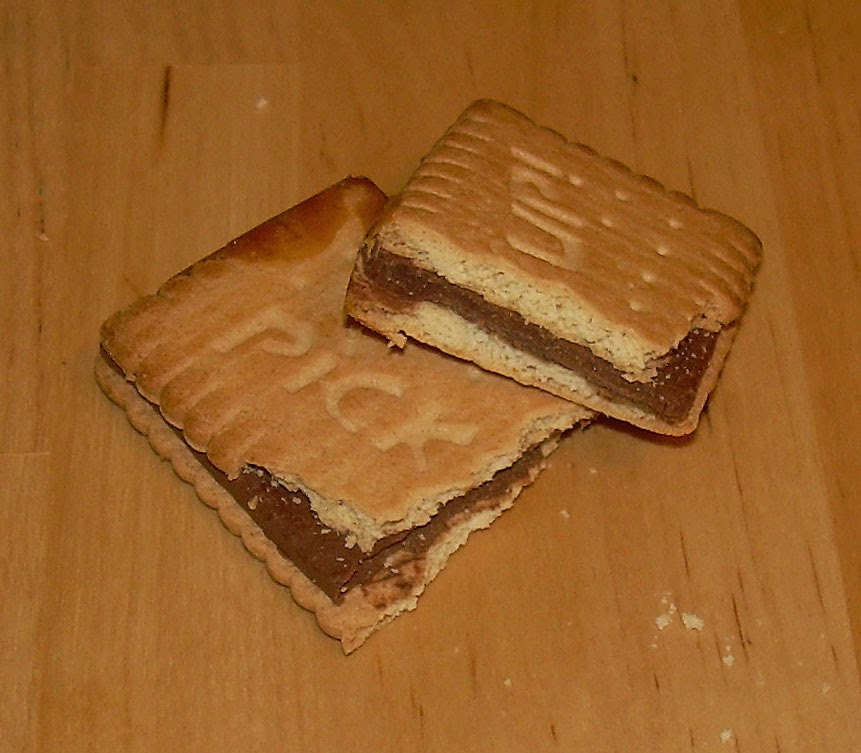 The box that Candy German sent me had a packet of five of these taped together. My guess is that these are usually sold in a bunch rather than individually. I've not seen these sold anywhere locally, so my best advice is to look into Candy German's site and service or shoot them an e-mail or Facbook message if you're interested in them. Overall, I have to say that the German snacks that they send are interesting and worth the investment in a box. These cookies are just one of the delights you can get your hands on with their help.

History has seen its fair share of tyrants - Caligula, Stalin, Pol Pot, and, of course, everybody's low-hanging fruit in the game of "name that maniac", Hitler. A lesser-known tyrant is, of course, Tyrant Habanero. It doesn't commit genocide, but rather attempts to slaughter your taste buds with insanely hot, salty snack treats. Of course, what it does to your mouth is nothing to compared to what it's going to do to the end of your digestive tract on the other way out. Oh, the humanity!

Tohato continues to expand it's line of mouth-burning snack treats with a black curry version of it's salty pressed food-stuff. The chips are shaped as you see them on the illustration. They're supposed to resemble naan bread, but that wasn't the first thing that came to my mind. Black curry is usually dyed with squid ink or some other coloring to make it that color. Word is that Sri Lanka has an actual black curry with unique spices, but I'm betting more on the squid-assisted variety in this snack than the more exotic option. If I can locate this at a Japanese market, I'll certainly give it a try. If any of my readers have sampled it already, I'd be curious to hear your impressions.
Posted by Orchid64 at 5:11 PM 3 comments: