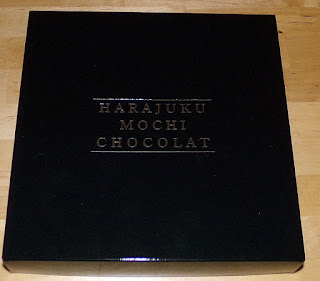 Getting old is a weird experience because you find yourself stepping into the experiences that you used to snicker at your parents for having. You get those weird yellow toenails that are hard to cut so there is nothing you can do about how you're now getting "old people feet." You look in the mirror and see your parents' faces more clearly because you're moving into the age range that they were when you were a kid growing up. You find that normal things, like sleeping in a bed for an entire night, will result in pain. Of course, that assumes that you sleep through the night at all as the body actually forgets how to sleep as you get older.

Why am I talking about age in a review of Harajuku Mochi Chocolate? It's because I missed last week's posting because it was my 53rd birthday. I had plans to go to a very nice hotel with a jacuzzi on the Southern Oregon coast, but the fires in that area rained down ashes and filled the area with smoke. I'm not really complaining because people who lived just north of my hotel had to evacuate their homes. I'm not a fan of arguments of relative privation (as I think they are just a way of invalidating the feelings of others), but it's hard to cry too hard over a cancelled vacation when people are fleeing their homes due to a nearby inferno threatening to rob them of everything they have. 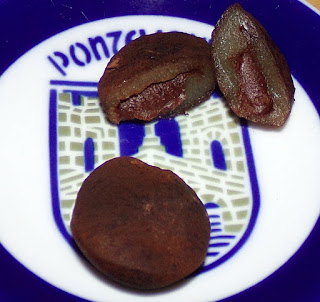 Another aspect of aging is that my appetite for any food isn't as high as it once was. It has been taking me far longer to get through my stash of traditional Japanese sweets from Nippon-ya than I would have expected. Despite that, I have to say these sweets have aged very well. They aren't as soft as the first box of these that I reviewed, but they are far from stale. They are just a bit chewy and less pillowy soft after four months in the closet. Frankly, I'm impressed.

In terms of flavor, these are very potently chocolate-y, while not being too sweet or bitter. It's quite an impressive balance between the two as most strong chocolate flavors have the bitterness of a dark chocolate or they are washed out by overly sweet milky flavors.

While these are awesome as a delivery system for chocolate and as a way of enjoying the texture of mochi, they aren't especially unique. I think they are a great choice for someone who is squeamish about exotic flavors who you want to share a mochi sweet with, but I don't think I'd get them again despite how good they are. I enjoyed them greatly, but I'd rather have something more unique and I can get good quality chocolate in cheaper delivery systems than this. However, if you like chocolate and you like mochi, these are a big winner.