This is the first item from the ZenPop Sweets box that I previously reviewed. I chose it mainly because I wanted a small dessert and it looked small and like a dessert. That being said, this is a "kid's snack" in Japan and sold for a mere 20 yen (20 cents), so it's unrealistic to expect it to be as refined as larger, adult-marketed shelf stable pastries. And, of course, shelf-stable pastries are a completely different category from actual fresh pastries.

If cakes were to be compared to movies, the real deal would be a comedy like "Grand Budapest Hotel," and this type of product would be something by Adam Sandler which didn't do well at the box office. Note that I've never seen a good Adam Sandler movie, let alone a bad one. However, while I distrust most of what the internet tells me, I have some faith that their disdain for a movie that failed to make money that also featured a guy who irritated the crap out of me every time I saw him on "Saturday Night Live" is appropriately placed. So, don't expect some finely made performance a quirky, beautifully executed manner. This is more pratfalls and dumbassery. All you can hope for is that it'll make you smile anyway. 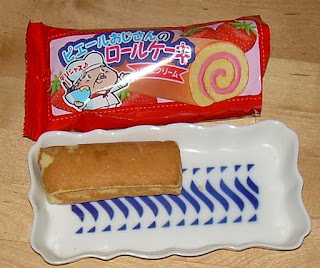 There was no nutrition information on the packaging, so I can't tell you how many calories it is. It can't be many though because it is small. The packaging is very deceptive in that the actual cake is less than half the width and only a little over half of the length of the package. It's also not exactly what you'd think of as a Swiss cake roll with moist sponge cake and whipped cream frosting. The filling is a somewhat cream-cheese-like frosting and the "cake" is somewhat doughy and quite moist. It's more akin to a slightly damp pancake. 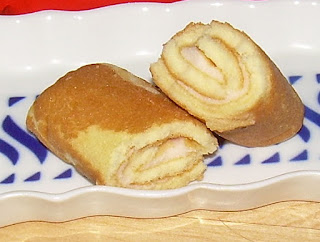 When you open it, the strawberry scent is potent. The flavor is not super sweet, which is actually a bonus. The cake has a nice flavor, but the doughy texture is a little disappointing as it feels like you're noshing on a slightly underbaked item. Still, there is something appealing in it's qualities and the flavor of the cake is decent.

The interesting thing about this is that, if you are expecting Ralph Fiennes instead of Adam Sandler, this will disappoint, but it's actually not a bad shelf-stable snack. It needs to be placed into its own category and I felt it was closer to a low-rent version of a dorayaki (a traditional Japanese snack which looks like two pancakes filled with red bean paste).

I wouldn't buy a case of these, and I wouldn't want to eat one every week. If I still lived in Japan though, I could see me buying one occasionally and keeping it in the my desk when an urge or craving hit. I think the fairest thing to say is that I wouldn't want to see this in every box I got from a snack box service, but I wouldn't mind seeing one show up once a year or so. That actually makes it something I'd want to see more frequently than any Adam Sandler movie. 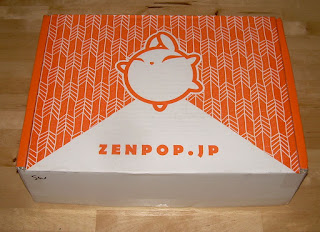 I have to admit that I've been away longer than anticipated and part of the reason for that was that I bought another Japan box from a particular entity and it was so disappointing that I lost my mojo for talking about Japanese snacks. Yes, I am quite the delicate doily. It could also be that my husband and I both got sick a few times due to the fact that he works with germ factories, er, children.

Another issue for me was that I just couldn't get myself to eat as much Japanese junk food as I used to (oddly). I used to work up some enthusiasm for even terrible kid's snacks, but I just looked at my pile and was full of sad. I still have some of the disappointing items sitting around being neglected and going stale because I was so unhappy that they figured into the aforementioned box of sadness.

Fortunately, after a bit of a break and good fortune, my enthusiasm is refreshed. I was contacted by ZenPop about doing an unboxing and review of their service. They sent me their "sweets box." That means I didn't actually need to pay for this box, but I will say that, had I paid, I would have been pretty pleased and I would absolutely buy their box again in the future because this is the first box I've gotten which has a ton of full-sized snack products that represent what you'd actually buy in a Japanese shop if you were able to stroll around and buy the items on your own.

To the best of my ability to tell, nothing in the box is part of a broken up multi-pack. This is the only box I've received that didn't have mini versions or single servings of tiny snacks that originally came in what would be considered a "family sized" bag. This is no small thing because it means the value of most of the items is about a 100 yen (about a dollar). That being said, a few of the items could cost as little as 50 yen (about 50 cents) and one was likely 10-20 yen. 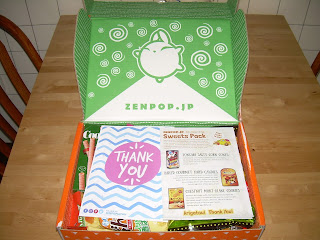 With 15 items in the box, that means that about 40-50% of the cost of the box ($29.50) is represented in the cost of the items. There is nothing that annoys me more than getting a box that claims "x" number of items and a few of them are a single, individually wrapped pieces of hard candy or a tiny marshmallow that originally came from a bag with 10 pieces in it. It's just depressing when boxes do that. I'm guessing they're figuring the recipients won't know what they're doing, but I know, and I'm going to tell on them. 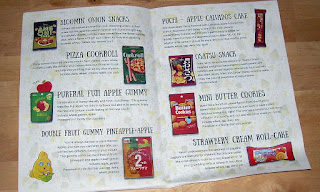 Now, my readers may not feel that 40-50% being tied up in actual item costs isn't a good deal, but the reason that it is is that shipping, boxing, and labor are reasonable costs to consider. The parcel was sent by SAL and would have cost 1,180 yen ($9.55) just for the postage. The custom box also cost something as well. So, we're looking at another $10 in shipping costs on top of about $13 (my best guess) for the items themselves. That leaves about $7 for the company to pay for the labor of assembling the box, designing a pamphlet, and printing the information. If I ask myself, would I pay someone a fee of $7-$10 to send me a box full of full-sized Japanese goodies to me, the answer is, "yes." 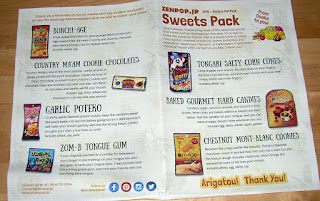 I can say with certainty that I didn't get a special box because I'm a reviewer getting a free sample box because the pamphlet is clearly designed for everyone and includes every item I received. That being said, the pamphlet was printed individually on a color printer so this wasn't a professionally printed item and could be modified on the fly. My guess is they don't do that because of changing inventory. Since my box heavily focused on Halloween items, they may discontinue them at a moment's notice. I liked very much that the box included a lot of seasonal flavors (apple, chestnut, sweet potato), some interesting novelty flavors ("bloomin' onion") 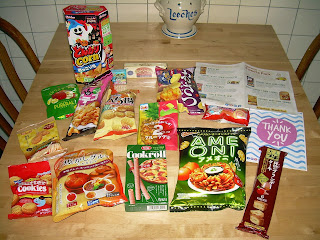 In terms of the selection of items, I was also very pleased by and large, though there were a few "mundane" items which I wish had been replaced with more interesting versions. The Tongari Corn, for example, is really just plain old Bugles corn snack. I'd rather have had one of the garlic butter or other flavors. That being said, the box is pretty cool and I'm guessing they chose this because of the adorable Halloween box with a mask on the back. It's the sort of thing you might want to save as a souvenir of the experience. The only clunker for me was the small bag of mini butter cookies. It's not only one of the few 50 yen (likely) items, but they're just plain old cookies. The other options are all much more interesting though and I'm looking forward to reviewing them. I will note that I have reviewed one of the items before and that was the "Osatsu snack". That means I can also clearly identify it as a 40-yen item based on past experience.

Note that my cost of items estimates certainly could be wrong. All I can say is that this is definitely an impressive array that feels much more like it's worth the $29.50 it costs compared to the other boxes I've written about (and especially the one I didn't write about).

My conclusions about ZenPop are:

Worth it? It is the best value I've encountered so far from these types of service and I hope they don't change the types and volume of items that they include. If any of my readers use the ZenPop service, I hope you'll let me know if your experiences mirror mine in terms of getting full-sized items as purchased in stores and not getting items from a parceled out multi-pack.

Note: I am not promoting ZenPop, though they did provide me with a free sample box for review purposes.
Posted by Orchid64 at 4:31 PM 2 comments: