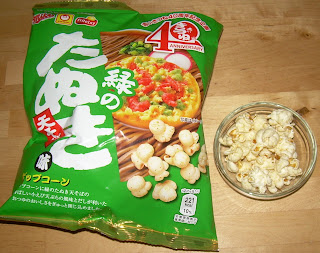 On the social media outlet, "Reddit," - that's the one that all of the content aggregaters steal content from - I occasionally see a question to the effect of, "If you fell asleep for a hundred years, how do you think the world would have changed when you woke up?" Being in Japan was a bit like being asleep for 23 years and then waking up and finding out how America changed. One of the ways in which it changed was that popcorn was sold in a popped format, in flavors, and in shelf-stable packaging.

It still boggles my mind that things like "Boom Chicka Pop" sell already popped corn in bags for a high mark-up. One of the best things about popcorn is how amazing it tastes when it is fresh. A second amazing thing is how cheap it is. Third, it's incredibly easy to make. You just need a pot with a lid and some oil, a paper bag and a microwave oven, or an air popper. All of these are fast and easy and you can spend about 10 cents for a vat of fresh, fantastic-smelling popped corn. So, why pay more for old corn? Well, people are just that lazy now.

I will have to be fair and say that it may not only be about laziness. Bags of popcorn come in flavors that you can't easily make at home, though that's less true in the U.S. than of this Japanese variety. This is designed to taste like a particular variety of heat and eat soba sold by Maruchan.

My expectations of this were very low. I'm not a big fan of soba and this has katsuobushi in it. That's dried, shaved fish to you and me in the English-speaking world. It's not that I don't like katsuobushi as part of some dishes, but just that I don't want it on my popcorn. This popcorn does have a slightly fishy ending taste, but the front and middle is a really tasty savory mix of multiple flavors including garlic, green onions, kombu, pork, and seafood. None of those flavors comes through as itself. They are just one unified sense of savory flavor. It's addictive and very tasty.

While I was very pleased with the flavoring, the texture was less crispy than I'd like. It wasn't exactly stale, but it definitely wasn't at crunchy as fresh corn or as I'd hope for a salty snack. Still, I enjoyed this quite a lot and would definitely consider another snack with the same flavoring again. 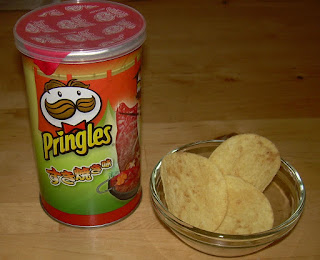 I have never been much of a Pringles person. Sure, being a fairly organized person who likes orderly spaces, the concept of Pringles appeals to me. Who wouldn't love an anal-retentive concept in which your chips are well-behaved and identical such that they stack neatly into a canister. What's not to love if you're compulsively tidy?

What has never been for me to love is the texture. Compared to potato chips, they have a crumbly, softer texture because they're not only made with dehydrated potato, but also flour. They are a more processed version of something which is superior in its original form.

All of that being said, I've not eaten deep fried food regularly for a long time and I can't digest it well. My husband is the chip eater in the family and, if I sample just two of his fried chips, I'll be feeling it hours later. These Pringles didn't bring on any digestive problems like deep-fried chips seem to. That's quite the bonus right there. One thing is for sure, gluten is my friend as the wheat flour mixed in these didn't cause one problem for me.

The place where these really shine is the sukiyaki flavor. It's very savory and "meaty" in a way I've not experienced before in a chip. The flavor depth is impressive and I loved that (and I don't even like beef). You get a lot of complexity including onion, garlic, mushroom, and, of course, the beef. I really liked these chips, much to my surprise. I guess that my enjoyment was absolutely amplified by the lack of regret later on.

I did a little research on Pringles because I've always wondered why anyone would try to make a processed chip when natural chips are so tasty. I thought perhaps it was one of those wartime things where a product comes about because of a shortage or, like custard powder in the UK, the product was created because someone had a food allergy. The answer seems to be because a food chemist and storage technician could do it and because people complained about how messy chips could be. It's not the most exciting answer, but it is an answer. 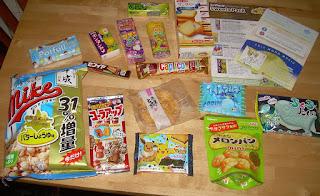 I'm sorry to give shorter reviews for these, though I think, given my tendency to be verbose, there are some who might be relieved! ;-) I'll be back with more usual reviews soon.
Posted by Orchid64 at 10:59 AM 4 comments: