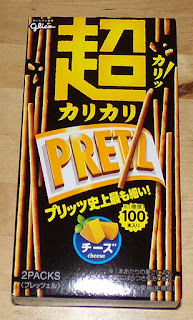 My husband and I have been back in the United States for almost exactly seven years come the end of this month. This has nothing to do with Pretz, but it has something to do with the delay between the last review of the contents of my ZenPop cheese box and this one.

For the duration of our time back "home" (which often doesn't feel like home), we've lived without an actual television. That is not to say we didn't watch any content which is on TV, but just that we did it using a 28" monitor that we hooked up to a PC or our blu-ray player. My husband finally decided he was tired of seeing puny people from across the living room when we sat on our loveseat (Note: we also lived without any sort of "proper" furniture for about six years in terms of seating). So, we bought a 43" TV with the notion that we could now see things on screen more clearly with our aging eyes. Simple enough, eh?

Well, it turned out not to be so simple. We live in a pretty small house with a lot of impediments to furniture arrangement. It was built in 1949 and has few wall outlets, lots of heating vents, and unhelpfully placed doorways. I love the place and the size. I also love the neighborhood, but, boy howdy, is it hard to set up much of anythign in regards to furnishings. I ended up rearranging in anticipation of the TV, finding that failed greatly and then doing it all again three days later. My total investment in time for this game of musical furniture was about 15 hours. The whole experience totally wiped me out and I had no energy left for talking about pretzels.

By the way, all of that effort was for the picture below (cat not really a part of the process, but the thing on the far left is a treat dispenser which she was poking around in). It looks pretty simple, but that was the hard part. Getting it down to this level of sparseness was no small feat. 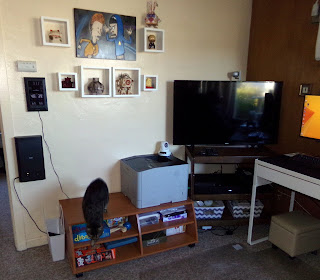 However, now that it's all worked out, I can focus on more important things like talking about salted snack foods. I love pretzels of pretty much any stripe, but there are two things about them which are missing from these Pretz and that was disappointing. 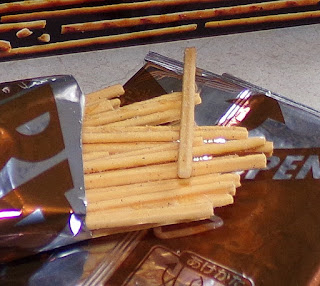 First, there is the flaky, crumbly interior of the pretzel which yields so beautifully compared the harder baked exterior. These have more of the texture of a piece of raw spaghetti (yes, I've eaten raw spaghetti for reasons which are very sad). They aren't quite that hard and they do yield a little bit, but there is something about the texture which is unsatisfying.

The second point which is missing is the distinctive rye flour flavor that I associate with pretzels. The cheese powder on this is pretty decent. It's got a pronounced processed cheese flavor with the appropriate savory notes and a little bit of a "dairy" kick, but it's not overbearing. It's also not too salty while being salty enough. The main problem is that the delivery system for the cheese flavor, the pretzel stick itself, is too insubstantial to hold its own.

This is not a bad snack by any stretch of the imagination. I just feel like it sacrificed some flavor complexity and textural satisfaction for a stronger crunch. They are more like a thick chip version of a pretzel than a normal Pretz. That may work for some people, but it didn't really do it for me.

Note: This was part of my free ZenPop snack box.