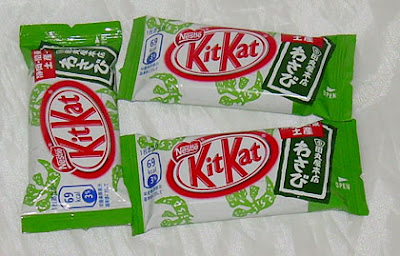 The wasabi KitKat is another of the regional specialties that Nestlé Japan ostensibly markets only in a particular area. This bar is a specialty of Shizuoka prefecture, and wasabi is chosen as a flavor because that area is known for its wasabi. A web site devoted to boasting of Shizuoka's benefits states that it is the birthplace of that root, and that wasabi is often used in things like ice cream, yookan (a sort of jellied bean paste loaf), and other sweets in addition to its more common use in things like sushi and savory dipping sauces. It also claims that only cool climates and clean water produce wasabi, which I guess that area must have, though those are hardly unique attributes.

I didn't go to Shizuoka, and I didn't buy these KitKats. No, I didn't pilfer them from some unsuspecting tourist returning from that region. One of my students went on a business trip to the area and kindly brought me some of the wasabi KitKats knowing my interest in Japanese snacks and that I write about such things for this blog. I asked her opinion of these, and she said that she felt that the wasabi flavor was so subdued as to not really amount to much. Her response, as well as the odd combination of something so often paired with savory foods with sweet white chocolate, piqued my interest all the more.

I can't give exact price information for these since I didn't buy them, but my husband says that a full box of regional KitKats (which can occasionally be bought at some shops in Shinjuku in Tokyo as well as Tokyo station and Narita airport) sells for 800 yen ($8.65) for 12 mini bars. One of the reasons that I have only reviewed one other regional KitKat is that I'm unwilling to pay a high price for a large portion of something I may not end up enjoying. I leave that up to Jen at Jen's KitKat blog as that is her sole oeuvre and I have far more competition for my snack-food yen. 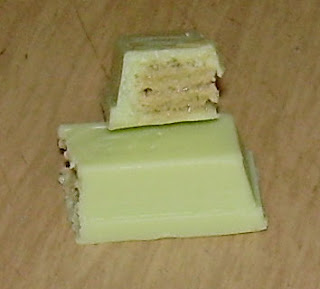 These bars are 69 calories each, and pretty much in the range you'd expect calorie-wise for a KitKat mini. Because I only have the bars and not the box, I don't have an ingredients list, but I'm guessing that wasabi is pretty far down the list as it is not a strong component. The bar doesn't smell like wasabi at all. Mainly, it smells like white chocolate with something which is hard to pin down.

The first bite is dominated by the white chocolate sweetness followed by a sense of the grassy element of wasabi minus the heat. This isn't too surprising since wasabi's heat sometimes needs some build up to shine through. By the end of two bites, I had a stronger sense of the wasabi, but only the barest whisper of heat came through after I finished the bar. The warmth and grassy taste lingered in my mouth long after I finished the bar, but not in an extremely potent manner.

As a curiosity, this isn't bad, but it really isn't good either. The wasabi doesn't lend anything to the white chocolate in the pairing. It's a little like drinking Coke with a peanut butter sandwich. It's not gross or anything, but it's also not particularly great either. Unless you are looking for a novelty or are a serious fan of wasabi and absolutely must try everything you can get your hands on that showcases it, I wouldn't recommend buying this. Frankly, I'm really glad I got to try this because it's the sort of thing I want to do as a snack blogger, but only because I was given it as a gift. I'd certainly regret it if I bought a whole box of these.

I must be sensitive to wasabi because I was slightly overwhelmed with wasabi when I tasted them, but most everyone else who has reviewed them has been more in line with your comments. I still think it would have gone better with dark chocolate.

I have a feeling, and it's just a guess, that people who frequently consume wasabi may taste it less than those who eat it infrequently. I don't eat it all of the time, far less than many people around me, but I have had it in sembei.

I'm not sure that wasabi really goes with *any* type of chocolate, but I'd probably give something else a try if I wasn't required to buy a big box to sample it.