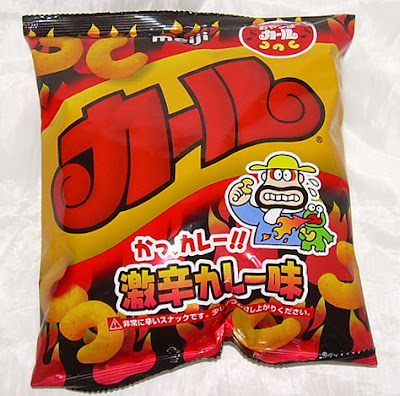 In Japan, you don't have to settle for a "hot Carl". You can get a "red hot Carl".
One of these days, I need to have a contest in which I post a food item and ask readers to enter their ideas about the ingredients in that item based on the sometime esoteric inclusions I've mentioned in former posts. It's easy to guess that something like curry, chicken, and onion flavors are in a baked corn snack like this one, but what are the chances of guessing that it includes "pineapple powder"? Ah, Meiji, you tricky devils!

"Karl", or as we might say in English, "curl", is a popular brand of salted snack from Meiji. In various flavors, sizes,  and packages, these can be found in most convenience stores and markets. When I was working, I often saw them sold in foil lined paper cups like Calbee's Jaga Rico. They were first introduced in 1968 in a cheese flavor and a curry version first came out in 1969. There's an interesting scrolling photo history of all of the flavors, designs, and packages since the product's inception here.

There are instructions on the back of the bag telling you how to tear it down the seam if you're offering these at a party.
When I saw this bag of corn snacks perched outside of Okashi no Machioka in a box labeled "69 yen" (75 cents), I jumped at the chance to try it. Not only was it marked down in price, but it was also new to may area and it has flames all over the bag. Little encourages me more than the chance of something red hot. It doesn't hurt that the entire 48 gram (1.7 oz.) bag weighs in at 246 calories. That's a bit on the low side for a salted snack food of this sort in Japan considering their penchant for high fat counts. The size is such that I felt quite full after eating just half of it. 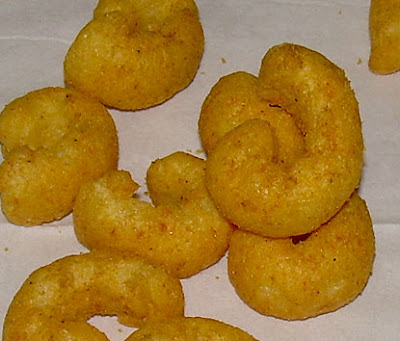 When I first opened the bag, I caught a whiff of what I could colorfully refer to as "corrupted curry". There are definitely curry elements, but there's more. The curls themselves are puffy and satisfyingly crispy. They have a nice depth of flavor from all of the seasonings that are layered onto them, which include various seafood powders, pork, and soy sauce in addition to the aforementioned ingredients.

Sometimes the heat that is advertised on Japanese snacks is sub par, but these are gratifyingly hot. They also have a cumulative fiery effect that makes your tongue get a better burn as you eat more of them. They may not satisfy the most ardent hot pepper lovers, but they pleased me.

I enjoyed these and would definitely buy them again if I wanted something hot and salty to snack on. I was really happy with the flavor depth as that is something that some corn-based snacks are lacking in my experience. If you want something hot and spicy to have with a soda or alcoholic beverage, I'd recommend giving these a go. You won't be disappointed, and they aren't as fattening as such foods can get.

If you'd like to download some items that have the mascot's theme (the frog and farmer), you can find some message cards, a coloring page for kids, and some tickets here.

OOOOH! I'm a huge fan of curry, corn snacks, and the addition of spice (heat) in my food. I would have definitely enjoyed trying these!

The snack didn't overwhelm with its spiciness, did it? I find such products sold here in the states, such as Flaming (Fire) Cheetos or Doritos, far too spicy, burning one's tongue in a not-so-good manner that I find those snacks not enjoyable.

Hi, Dani, and thank you for reading and commenting.

I can't say if this would overwhelm others but I tend to like pretty intense salted snacks. It wasn't too dense on the curry front, but it was fairly hot, especially by the time I ate half of the bag (I ate it in two rounds). I haven't had the chance to sample flaming flavors from the U.S., so, unfortunately, I can't compare. My guess is that these would be a little milder, but not guarantees. ;-)

If you're ever interested, I'd be more than happy to send you some Flaming Hot Cheetos...LOL! Just don't sue me if your taste buds are completely burnt from the heat. ;)

LOL those cheetos aren't that spicy. My thai friend had some and ate a couple laughing on how bland they were. Not only that but the ingredients list is reminiscent of a list of chemicals found in a meth lab.

So happy to see these reviewed. I'm a big fan of the brand and look forward to a variety of flavors :v