Click to load the full-sized version. All images are from Fujiya's web site.

When it comes to Halloween, Japan churns out all of the adorableness without any of the pesky trick or treat aspects. No one will come to your door and beg for candy. No one will egg your house or toilet paper your bushes, but you can still go out and find some of the most kawaii (cute) Halloween kit in the world. I've been keeping an eye on such things, while the rest of the world has been preoccupied with Burger King's pumpkin and black burgers. I'm probably jaded, but the thrill of, "oh, look, Burger King has piled some new weird crap on a burger," doesn't thrill me like it once did. It's not like every other country doesn't do the same thing, but somehow Japan seems to be a stronger focal point for such attention. A Belgian fast food place made a black burger to tie in with Star Wars, and the world's blogs weren't wetting their pants over it. I guess black food dye is less exciting than squid ink.

Before I get into talking about all of the nifty stuff that Fujiya is selling at present, I'd like to mention that this is a holiday which the Japanese are slowly transforming into one of their own. Instead of kids going door-to-door and pestering their neighbors, something which is really outside of their cultural norms, they are increasingly setting up a holiday in which kids can go to the shopping streets (shotengai) and get goodies from participating merchants. This provides a promotional opportunity as well as ensures that not innocent people are bothered by strangely dressed children in their genkan.

As for the Fujiya offerings, most of it is the same sort of deal that other snack makers are doing. That is, they offer the same basic foodstuffs, but wrapped in a Halloween motif. The difference with Fujiya is that their packaging is going an extra mile in some cases. It's not only a Halloween design on the plastic bag, at least in some cases. Some of it has nifty keepsakes which would make adorable souvenirs of Japan or lasting decorations to add to ones collection of plastic skulls and grave markers. 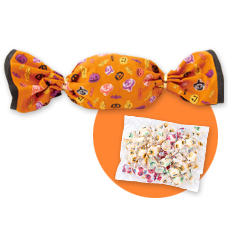 One of the coolest of such items is a Halloween bandana that encloses "Milky" candies. Fujiya recommends you use it to wrap gifts (like a furoshiki) or even use it as a napkin. The candy really isn't the best. I felt rather indifferent about it as it seemed like any old taffy-style candy, but I'd probably buy a bag of it just to get the cute bandana. This is 500 yen ($6.26), and yes, I realize that sounds expensive for a printed piece of fabric and a bag of taffy. 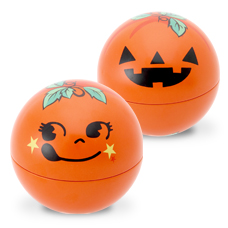 The Peko pumpkin, which is a little tin sphere which has Peko chan's face on it on one side and a jack-o-lantern on the other, is probably one of the least imaginative options, but I find the styling of the faces uniquely Japanese. The pumpkin face is so cute and joyful that you know that it had to have originated in a country in which people don't find being  happy to be uncool. 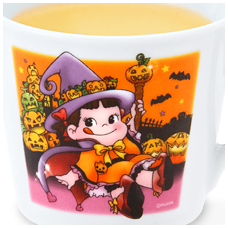 There is also a pretty cute mug that you can buy "purin" (pudding/flan) in. When I was living in Japan, the one thing I never had a shortage of was coffee cups. People seem to think that I'm clumsily breaking them right and left or they were utterly lacking in imagination and lazily just kept plying me with mugs. Even Peko Chan kitted out as a cute witch with a lolling tongue wouldn't get me to purchase this, but I have to admit that I'd be tempted as it would be a really nifty souvenir. For 390 yen ($4.88), it's a little pricey for pudding, but the mug is earthenware and probably a shade nicer than 100-yen-shop finds. 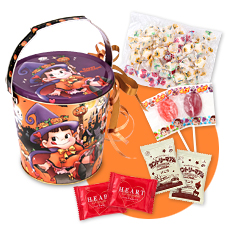 Finally, among the items I'm spotlighting, these a pretty nifty tin. Inside of it are milky candies, Country Ma'am cookies, lollipops, and Heart chocolates. I'm not sure how big the pail is, but it'd make an adorable trick-or-treat tin for a small kid, provided that kid was more interested in looking cute than collecting tons of loot. If you happen to be in Japan as a tourist right now, and this is actually a good time to be in Tokyo because the weather would have finally mellowed out from the hideous summer, these things would be much better than your average crap in the airport as souvenirs to take home.

For those who are interested in a cute wallpaper of Peko chan made up in a Halloween motif, you can download one in various sizes here. There are also seasonal calendar wallpapers on this page.