Glico Shall We Biscuits, now with tea included 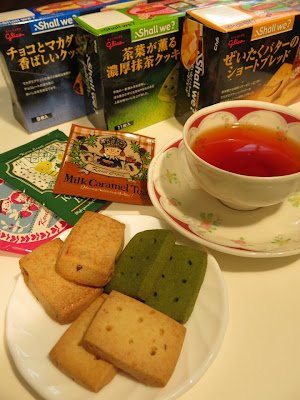 All images from Glico Japan.

Recently, I was contacted by a woman at the BBC and answered some of her questions about Japanese food/snacks. One of the things I said to her when she asked about odd flavors of ice cream (think "chicken", not "sweet potato") was that things are not nearly as weird as people think. Just like all countries, there are regions in which oddities exist, but they are highly localized disturbances in the food continuum. I'm sure some place in Japan sells especially bizarre ice cream flavors, just as Gilroy in California has garlic ice cream on offer because they are the garlic capital of the state (country?), but it's not a mass market thing. People who write about food in foreign countries tend not to concern themselves with the mass market stuff so much because it's actually pretty mundane. If 999 people are eating chocolate cookies, a journalist or blogger will choose to focus on the 1 who is eating the cookie with shrimp testicles in it (note: I do not know if shrimp have testicles, but if they do, I'm sure someone eats them as a delicacy). Well, 998 people would be eating "Shall We" biscuits by Glico and the 999th would be me generally not eating them. 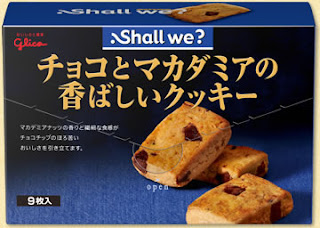 I think I may have bought one box of these once while I was living in Tokyo. It's not that there is anything wrong with them particularly. They are actually pretty tasty consumer-grade shortbread cookies. It's more the case that they are a bit like a package of "Chips Ahoy". They'll get you there, but not necessarily in high style. I consider such cookies perfectly fine, but nothing to get excited about. 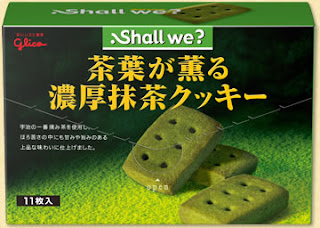 For me, part of the problem with these little blocks of cookie was that they always reminded me of the types of cookies that you bought in a roll and sliced off bits and baked to make them. The fact that they clearly were cut from enormous slabs of dough and mass produced without even trying to fool me into thinking grandma lovingly hand crafted them in her kitchen wasn't helping matters. They actually resemble micro versions of Calorie Mate.

That being said, there was something inviting about the name of the product. "Shall we?" is a question you ask as you sit down for tea with friends and prepare to gossip about people you supposedly like. It's the civilized start to verbally savaging your enemies and figuring out how to destroy their lives in the most passive aggressive manner possible. In furtherance of this illusion, Glico has teamed up with tea maker Karel Capek and is now including one bag of their custom tea blend in each box of cookies. Each tea is carefully selected to match the flavor of the cookie type it is included with. Butter cookies come with milk caramel tea. Something called "everyday tea" (which is mixture of teas from the Ceylon and Dimbula regions) comes with the green tea cookies and, strawberry (called "Girl's Tea") accompany the chocolate chip macadamia.

Karel Capek is a boutique brand and this is an interesting joint campaign which is meant to elevate the "Shall We" brand and raise recognition of a smaller tea maker. The target consumer is women aged 30-50 and the release corresponds with Mother's Day. I guess women in said age group presumably have nothing better to do with their afternoons that sit around and eat boxes of cookies and share a single tea bag with their friends. Actually, the cunning nature of including just one bag is that anyone who wants to share their 11 cookies (or a mere 9 if you choose chocolate macadamia) with others will need to go buy more tea if they want to have them with the special tea included in the package. This was released on April 23 and will be available as long as the limited supplies last (which Glico believes will be until mid-May). Each retails for 294 yen ($2.96).
Posted by Orchid64 at 8:00 AM

There's one online feature that's been making the rounds for years now showcasing two dozen or so very very strange ice cream flavors from Japan. It's often held up as yet another example of how weird Japan is and what gross flavors they like. No one seems to mention or notice the fact that these flavors are from industry events (i.e., who can come up with the most "unique" flavor?) and none of them are available over the counter, so to speak. Then again, many people in Japan think all Americans carry guns, so...

You have a very good point about many Japanese believing Americans carry guns. That's one of those notions I battled when I worked there. I'm sure that even those who I talked to about it still believe the vast majority are packing heat. ;-)

oh my they look so good !