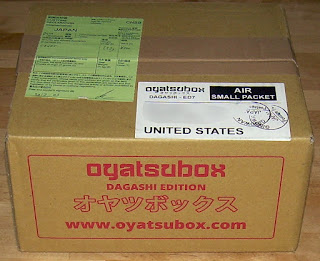 Back when I was still living in Japan, people who read this blog would occasionally ask me why I didn't start a business selling the snacks I wrote about. My answer was always that I'd done mail order before (Japanese KISS collectible items, mainly records), and it's generally not worth it for a low-value commodity like snacks. It was worth it for a high value commodity like recording collectibles because you can get some suckers to fork over $400 for a set of records which is really a pretty Japanese re-issue of music they already have.

At any rate, I am certain that, had I gone into the snack sales market, somebody "in the know" would do what I am about to do. That is, dissect the contents and the value and remark on how "worth it" it is. Before I get to that though, I'd like to say that I do understand the intangible value associated with the experience of getting these types of boxes. I currently subscribe to a quarterly subscription box from The Mysterious Package Company. It's the sort of thing which I do because it is a complete surprise and it represents enjoying the creative output of people both in the visual and literary sense.

These Japanese food boxes are part surprise, and part value of contents. Many services offer them. My intention is to shop around for what seems to be the best experience in terms of three factors:

Service: I measure this by speed, packaging sturdiness and design, response time to issues, presence of any problems, and packaging design/appearance (including how contents are arranged).

Value: This is where I look at how much each item would likely cost in Japan and how that compares to the price. I will also consider the shipping weight and expense as well as packaging costs.

Overall experience value: I would call this the overall "joy" factor. How happy am I after I open the box and survey the contents? How much fun or novelty is involved?

To be fair to the oyatsubox folks, they give you some idea of what to expect by posting the contents of past boxes on their web site. Before I orderd this, I knew it would largely consist of cheap children's snacks (or portions of multi-packs that had been broken up and distributed among multiple parties) because that is what "dagashi" means. Most of what they show from past boxes are items that would cost you 20-50 yen in Japan and mini snacks. The "Dagashi Box" subscription promises 8-12 snacks including a kit for making candy. My box had 9 items. 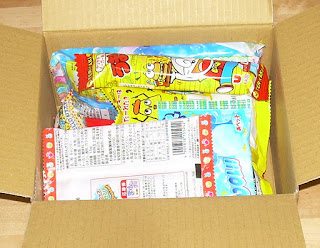 First of all, the concrete details. The box is sturdy enough and nicely printed with the company's name. It weighs 258 grams and was sent by the small packet rate by SAL, or so it seems based on the fact that it took a shade over 3 weeks to arrive. The company e-mails you when they ship and they ship subscriptions at the beginning of each month. I joined on April 22, 2017 and my box was shipped on May 2nd. It arrived on May 25. This is consistent with the 2-3 week time frame when using SAL. Assuming I'm right about the method of shipping, this cost 380 yen ($3.40) to ship. They say, "free shipping," but obviously somebody is paying and the cost is rolled into your subscription. I don't know what it costs for the company to have these small boxes printed up especially for them, but I'd be surprised if it was more than about 50 yen. It could easily be less.

In terms of service, the e-mail that told me when the box shipped was lost in a "promotions" tab in my gmail and I didn't find it so I contacted the company about this. They told me when the notification was sent and the date the package was sent. Their service was sufficiently prompt and polite. I will say that they have a tendency to send a lot of mailings relative to the duration of my relationship with them. They send promo coupons and advertising. It's not overbearing, but it was a little much. 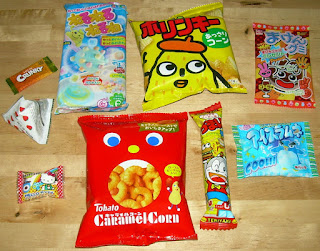 Getting to the meat of things, however, the most expensive item in the box is likely the Neru Neru candy making kit. These sell for 100 yen. Everything else was definitely 20-50 yen in cost or less. A tiny mini Crunky was likely about 10 yen or less. My best guess of the total cost to the seller of all of the items in my box would be 300-400 yen (likely around 320-340 yen). That means that, if I want to be generous in my estimation, their out of pocket total was around 830 yen or $7.51. About half of your subscription fee goes to costs and about half goes to labor/profit. Of course, I'm assuming they pay retail for their snacks. They may pay wholesale.

I don't find this to be exorbitant given that I know what would have to go into making this happen. Somebody has to run the web site, maintain subscriptions, print shipping labels, assemble and pack boxes, shop for the items and sort them out, and then take the boxes to the post office or manage a pick-up with them. If they don't have a ton of subscribers, it's pretty labor-intensive for not much money. If they have a ton, then it's likely a pretty good money maker. And while I don't find it unreasonable, I will say that it's a far worse deal than if you have access to an Asian market as their mark-ups are generally no more than 50% and sometimes less. However, a market's selection would be much more restricted as well and not everyone has access to such stores.

In terms of the "joy" factor, I was pleased to see the box and relatively happy with the contents. Some of the items are ones I've had before. In fact, I reviewed the Apollo strawberry chocolate in the past, albeit in a different package. That was actually the only item I'd reviewed before, but I'd be stunned if I'd never sampled Caramel Corn or the Kokeiya corn snack during my time in a Japanese office when such snacks were regularly passed around. I will be reviewing the items in the box individually in future blog posts so I'm looking forward to that.

I can't help but think that my copious experience in Japan makes this less thrilling for me than it would be for someone who had only been there as a tourist or who had never been there at all. There is a sense of things being novel and really "cool" when you open up a package of colorful snacks with foreign characters on them that you can't understand which can't be re-experienced once you're familiar with them. I used to talk about this situationwith my students in Japan. They told me that it was interesting knowing Japan through my eyes because so much of it was so mundane to them that it was essentially invisible. Now that I'm back in the U.S. again, I understand all too well what they meant.

If I were not me, I think I'd be pretty happy with the experience of getting this for only $15 a month as a purchased "experience." That's a pretty cheap subscription rate for nearly any box you might be interested in and there are enough items to allow you to slowly consume a few items a week without running out before the next one. That being said, because this is dagashi, much of the thrill needs to be in the unusual nature as kid's snacks are notoriously not very good quality or especially tasty compared to those for the more general or adult markets. These are more vibrant and colorful, but the tastes are likely to be sweeter, saltier, and less complex than other snacks.

My only complaint is that including just one tiny Crunky and one Hello Kitty marshmallow seemed a bit too cheap. Given that these items are parts of multi-packs and likely cost so little, I think either including more of those types of items of another brand or type or putting in a couple of these snacks would have represented a more generous package without costing much more at all. It would also be better business sense in that it would allow the recipient the possibility to share these tiny snacks with others and possibly increase the chances that someone else might want to subscribe after having some small samples from a friend's box.

My plan is to see what Oyatsu Cafe has to offer for their other, more expensive box, the Oyatsu Box which promises 10-14 "full size" snacks and one vending machine toy ("gachapon") for $25. I changed over my subscription and should see that box some time in June. One of the nice things about the Oyatsu Cafe subscription access is that you can alter your type of subscription on the fly so you can switch off between types if you want to change from time to time for different experiences. You can also cancel from the account page if you'd like to stop. Their interface is clean and easy to work with and that's certainly a plus.

I can't rate services the same way I rate the snacks, so I'll just give my subjective evaluation on my three criteria.

Worth it? Yes, but only if you are interested in kid's snacks for the novelty and colorful nature rather than for the quality of snacks.

Note: I am not promoting Oyatsubox. They did not provide me with any free samples. I paid as anyone else would for my subscription. They don't know I'm a Japanese food blogger or that I would be posting about them.
Posted by Orchid64 at 8:00 AM

Oh my goodness! I just found out today that your snack blog is back, and I'm so happy! I've been following it for years and still use it as a resource when I encounter new products at my local Japanese market and I'm wondering if I should give them a try or not. Welcome back to the world of Japanese snacking!

Thank you for reading again!