Two of my students recently returned from a holiday in France. They gave me a small box of salty butter cookies as a souvenir. The one who gave it to me said that salty sweets are currently "a la mode" (in the style). This is true not only in France, but in the U.S. and Japan as well. Salty caramels are particularly hot right now in America. In Japan, one of the most popular salty sweets is called "potechi". It is crushed potato chips covered in chocolate and can be bought at department stores. They are somewhat expensive, but very good.

When I saw a box of chocolate-covered potato sticks at the local 99 yen shop (like a dollar store in the U.S.), I figured that the salty sweet trend had gone mainstream. I picked up the box and decided to give it a try. After all, the front of the box says something like 'sweet and salty, you can't wait!' Who am I to argue with their assessment of my patience to try their product? 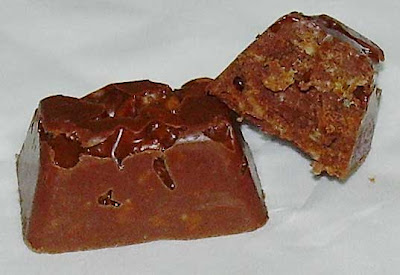 The box makes a point of letting you know that the potatoes used in the sticks have been grown in Hokkaido. In Japan, Hokkaido is like the Idaho of potatoes and mentioning the regions of origin of various ingredients is a common selling point. I'm not sure how much of the quality of the potato matters when they've been cut into slivers, deep fried, and covered in chocolate, but I'm guessing that isn't really the important point when marketing a food item.

There are 8 chocolates in the box. Each is individually wrapped in gold foil with "Tasty Crunch" and "Hokkaido Choco Potato" written across it. When freed from their gilded packages, they smell of sweet chocolate. The chocolate is milk, but has a stronger, deeper smell than some milk chocolate. The more expensive version of this type of chocolate (Potechi) is made by dropping crushed chips into a circular mold and filling it to a high point with chocolate. In the pricier department store variety, you can see an even base of chocolate around the bottom where the ample quantity of chocolate has pooled. In these cheap ones, they've clearly opted to use less chocolate. There is an incomplete "base" around them and a few spots where pockets of air were in the molds.

When you bite into these, they have a very nice crunch and a decent chocolate taste, but something is a bit off. The potatoes seem to carry a strange taste which gets more pronounced as you chew. At first, I thought they were perhaps recycling potato sticks past their due date in these and that's why they tasted funny. When I looked at the ingredients, I realized that the odd flavor was from "cheese powder" that had been added to them. I have no idea what compelled Meiji to add cheese powder to a chocolate/chip combination, but it ruins the flavor.

If it weren't for the weird cheese taste being thrown in there, I think these might be quite good, but it's hard to say for certain. These are worse for you nutritionally due to the fried potato aspect and pack more calories than your average treat at 45 calories per small block. I wouldn't buy these again and I'm very likely to simply throw away the rest of them. The box promises "tasty crunch", and they are crunchy, but not so tasty.
Posted by Orchid64 at 12:00 AM

One thing that we have here, that is seemingly local to Dayton is chocolate covered potato chips. They are made by local chocolatier Esther Price, and made with Mike-Sells chips, a local chip brand. They are quite popular, though on the expensive side as Esther Price is held in high regard as gourmet chocolates, but I have never had them.

A student once gave my husband a box of Potechi and they were very, very good. They were so much better than these strange things.

If you're in the mood to be bad, I recommend you try the chocolate-covered chips!

Have you tried the kaki no tane savoury snacks that are now coming covered in milk or white chocolate? I bought these (the white ones) recently for hubby and he loved them. I noticed that it has started to become a trend, however i wasn't familiar with fried chips in chocolate! Very interesting!

I've seen kaki no tane before, and may actually have tried it in the U.S. a long time ago, oddly enough. I didn't know it was chocolate covered though. That sounds... scary. :-)

I noticed that there are now candy bars which are chocolate covered potato chips. It's looking like a new fad at the moment.