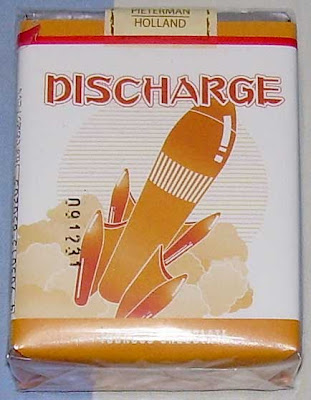 Sometimes, you just have to buy something because the packaging is irresistible. When I see a pack of candy cigarettes with a big, phallic-looking rocket and the words "Discharge" written across the top, it doesn't matter what I expect the stuff inside to taste like, I have to buy it. While these are produced for the Japanese market, they are actually made in Holland. The packaging is pretty clever. It includes a "warning" about consuming candy cigarettes and tooth decay much like real cigarette warnings about smoking-related maladies. The package also opens in the same fashion as a real cigarette pack. 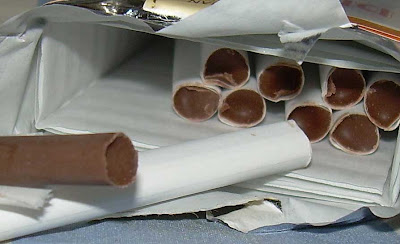 When I was a kid, candy cigarettes were readily available, but nowadays you can't get them because parents are afraid that emulating smoking behavior would lead to actual smoking. The "cigarettes" that were sold back then were chalky white sticks of brittle candy. These are soft, very sweet rods of chocolate double-wrapped tightly in white paper. In fact, they're so tightly wrapped that it's hard to peel off the paper. It's my guess that the melted confection if poured into the paper tube and sets inside of it. The chocolate contains no cocoa butter and is not very good at all. It smells very much like a bowl of cheap instant chocolate pudding and lacks the strong cocoa overtones of Japanese made chocolate.

These were 63 yen (70 cents) at a Family Mart convenience store and are clearly marketed at kids. There were two different labels and this one was the only one that was funny. The other one had a train on the front and said "Locomotion," so I don't think that this was intentionally funny so much as bad translation from Dutch to English. I wouldn't buy these again for the chocolate because it was low quality with too little chocolate flavor and too much sugar, but I'd buy them again for the novelty if another package came along that piqued my interest.

Incidentally, in Japan, cigarettes are called "tobacco" (ta-ba-ko or たばこ). That is, they use the English word altered phonetically to suit Japanese pronunciation. That is why these are named "Tobacco Chocolate" rather than the equivalent in Japanese of "chocolate cigarettes".

Great find! For the Engrish, I mean. I don't think candy cigarettes ever tasted very good, either, but they definitely weren't as funny as Discharge.

I've seen these around. I thought the same thing when I saw the picture.

We used to have some candy cigarettes that were long white candy with a red dot on the end. They were called "fags" as in our slang word for cigarettes. But recently they were renamed "fads" because some homosexual groups complained.