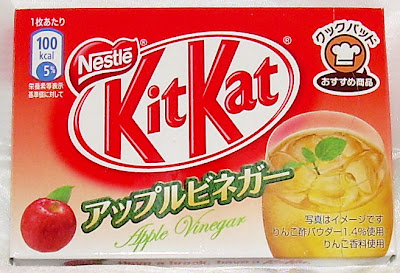 This particular KitKat has a few fewer calories than the average one. Most of the other varieties are 110-120 calories for two fingers. This one is only 100. That vinegar must be good for you!
Yes, you read that right. This is a vinegar flavored KitKat. This sounds a lot stranger to us Western folks perhaps than to Japanese people, who actually have "drinking vinegar" which they consume for health purposes. That is why there is a picture of a refreshing glass of iced vinegar on the front of the box.

If you're interested, there's a survey about the vinegar drinking habits of Japanese folks on the excellent web site, What Japan Thinks. According to the survey, about 56% of Japanese people have at one time or another drunk vinegar. The biggest reason they drink it appears to be to relieve fatigue. Mind you, I don't believe vinegar necessarily helps with anything health-wise, but I'm betting that it probably isn't bad for you and there's probably a chance it's beneficial.

The packaging is interesting because they're using the same inner package wrapper design as the apple KitKat. However, this is a white chocolate-based KitKat rather than a milk one like the plain apple variety. 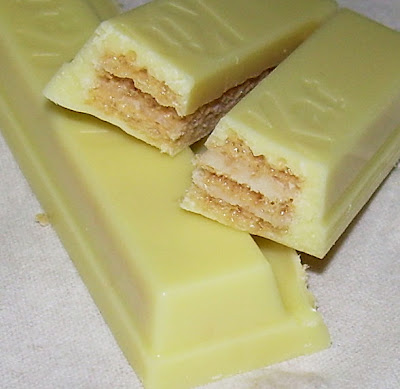 The bar smells mildly of apple. There is no scent of vinegar that I could detect. The first bite of this tasted like apple cider. I didn't have much of a sense of the vinegar taste until the second bite where it leaped up and tickled the back of my nose. As I finished off the first finger, I had a strong sense of apple vinegar flavor building up.

The surprising thing about this is that it's really not bad. It's not the sort of thing that you'd sample and think the flavors are discordant. The apple vinegar flavor offsets the sweetness of the white chocolate without creating a weird combination. My feelings about this are similar to the ones I had with the Muscat of Alexandria KitKat. That is that I think it's interesting and am happy to have sampled something unique, but I won't be craving it or buying it again. Once is enough.

Note that there is also a lemon vinegar KitKat on the market, but I haven't run across it yet. Both the apple and lemon vinegar KitKats are part of a campaign by Nestlé to get people to use chilled KitKats in summer sweets preparations. There are recipes for concoctions on the cooking web site. The apple vinegar recipes include one for "healthy ice" which is a frozen concoction including (among other ingredients) apples, sugar, condensed milk, cocoa powder and the apple vinegar KitKat. There's also a recipe for "refreshing mousse" which includes the same KitKat, tofu, honey, and yogurt.

This was also reviewed at Snack Love.

I drink apple cider vinegar because it's a digestive enzyme and helps digest food more easily. It's great for weight loss. By having it with every meal, I have lost 6kgs, and that is without changing anything else in my diet.

Another great thing apple cider vinegar is great for, is that it dissolves gall stones. Alot of chinese friends of mine, use it for this purpose.

I actually really like the taste, and I love the weight loss resulting from it.

I'd love to taste this flavour! I'll have to look on ebay for it.

The next kit kat I expected was wasabi, I definitely didn't expect this one!

My first impression was one of disgust - but thinking about it, it seems like the sour vinegar would balance out the sweetness of the candy like you said. Hm.. I wonder if I'd be able to find it over here.

I wonder if anyone would bother to import these given how strange the concept is. One thing I can say is that they seem to be relatively popular for the moment here. There aren't many left on the shelves at the local Family Mart.

I bought a whole bunch of them on ebay for my Japanese friends, they are really looking forward to having it. :)

How much do these things run on eBay, Kelly?

Right now, I'd be worried about them melting if they're shipped from Japan. It's getting pretty warm here and all public spaces are woefully under-air conditioned.

Oh, I always buy from the same seller. Somehow his never melts even when he sends them in Japan's summer.

I bought them for $AU 3.69 each which is not too bad as other sellers are selling them for around $4.70 aud.

I've established abit of a personal relationship with him over the years of buying from him, he's on my FB, and he throws in a few freebies everytime I buy. This time he gave me some of the rose mini's, so I'm looking forward to trying those.

That's one heck of a mark-up on the original price. I can see why he'd throw you some freebies once in awhile to keep you as a regular customer. At current rates, the price you're paying is 2.7x the price in Japan, but I guess all imports are going to be expensive.

I'm thinking I've gone into the wrong business. I'm making pennies per post, when I could be making so much more selling the crap I write about!

Yeah I often think that. You could make quite a few bob selling Japanese snacks, there is quite a market for it.

The guy I buy from makes alot of money I think because he has 35+ flavours of Japanese kit kat in stock including regional types. He also does special orders. I buy from him more than j-list because j-list are not organized enough, they don't have an up-to-date list of what is in stock. In the past I've ordered things on the site that said was in stock but in fact weren't and I had to wait for it to be ordered.

Most of the Japanese snacks I can get here, about one month after release if I want to wait, it's just the kit kats I can't get.

Then again I used to sell Aussie foodstuff on ebay, had my own store, and in the end the money wasn't worth the pain because people ordered things from me that weren't allowed to go through customs and I got complaints, or some people didn't buy insurance and they got lost in the post, and I got complaints. You have to be really dedicated and posting items every day. For me, it just got too much.

I guess you have to consider the pro's and con's. How much effort does teaching take compared to auctions and invoices, and $ comparisons.

I have GOT to try these. It just sounds so out of left field as a candy flavor.

My Great-grandmother was big on folk remedies (and we suspect she just randomly made stuff up as she went along). She used to make us drink 2 tablespoons of straight apple cedar vinegar for sore throats. It actually did work oddly enough.