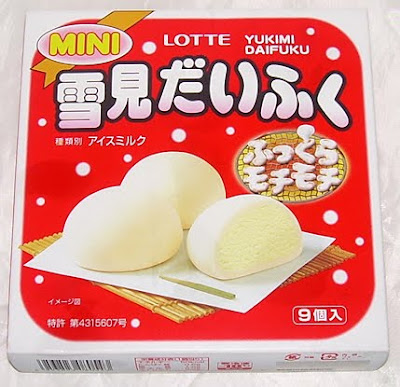 Ice cream is not a winter food, but that doesn't mean that it can't be marketed as such. "Yukimi daifuku" means "snow viewing rice cake filled with sweets". The web site for this product mentions that you should sit under the kotatsu. A kotatsu is a table with a heating element stuck under it so you can sit on your ass and stay warm in winter. The table has a blanket to hold the heat in, but you're screwed if you have to get up for any reason so many people sit under them for hours and hours when it's cold. I guess it serves the dual purpose of increasing your chances of storing winter fat. 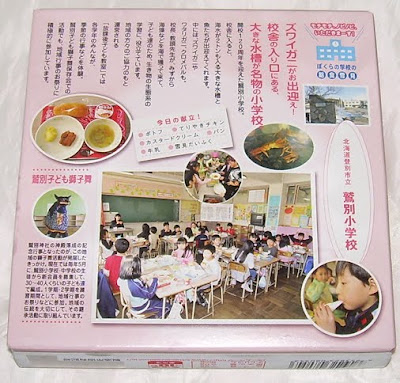 The back of the box shows school kids stuffing themselves with some daifuku. Why? I don't know.
Word is that "yukimi", or snow viewing, is supposed to be a traditional seasonal activity like watching the cherry blossoms. I'm guessing this works pretty well in the northern part of Japan, but in Tokyo (and southern parts of Japan) where we see snow in very small amounts about once or twice a year tops, I wouldn't be holding my breath waiting for a nice snowy day. 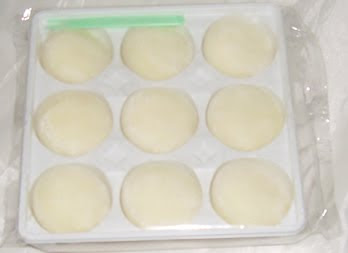 Lotte's yukimi daifuku mini is a small ball of vanilla ice milk wrapped in a soft mochi (glutinous rice pounded until it is uniform and stretchy in texture). Word is that the predecessor to this confection, released in 1980, was a ball of ice cream wrapped in marshmallow. There are 9 balls in a plastic tray with a little plastic fork to help you pick them up and eat them. Each is about 5 cm (about 2 in.) in diameter and 50 calories. 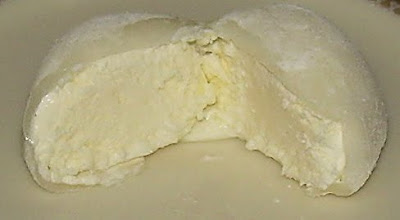 Though this is promoted as "ice cream", it's actually ice milk, but it's very creamy ice milk. The texture is silky and it has a nice vanilla flavor. The sweetness level is just about right. The mochi shell tends to peel off the ice cream pretty fast, but it makes for a nice chewy complement once the ice cream has melted in your mouth. One of the selling points of this is that the mochi stays soft even when frozen, and it definitely does. The texture is all you could hope for and it's not hard to chew. This is about as close to a non-threatening mochi (as in you're unlikely to choke to death on it) as you can get. The flavor of the rice cake itself is mild and fresh.

I was very pleased with this. Lotte did a good job of working the two components such that they are sweet, fresh, flavorful and tasty. If you like mochi, I'd definitely recommend giving them a try.

If you'd like to download a desktop picture of some cute bunnies or a cheesecake picture of a Japanese girl that are released to promote this ice cream, there's a page with a few items on it here.

These sound tasty! Ice cream mochi is actually fairly common in America, at least at Japanese restaurants and international supermarkets.

An unthreatening mochi - so true! I love these, unfortunately I can't find them that often at home.

These are the BEST. They had an L-size pack of double-chocolate ones in December that was awesome.

I found the variety pack of mini ones (vanilla, azuki, and matcha) at the Asian grocery store in Ann Arbor, Michigan when I went home last Christmas. So they do exist in the US!

Thanks to all of you for your comments!

I've seen so many different packs and types of these in the shops since reviewing this one. I think they were always there, but I didn't notice them until after picking up this box. They really are delicious!

I LOVE Yukimi Daifuku! More for nostalgic reasons over anything else, but I would always buy the 2-pack (bigger ones) and promise to share with my brothers...and never actually share, haha.