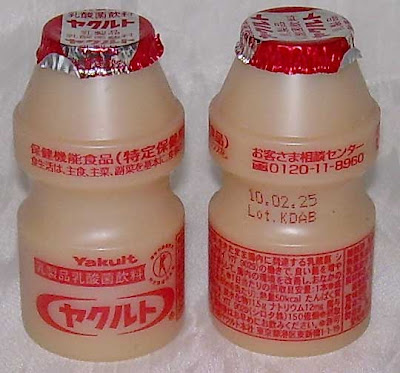 I've watched all of Michael Palin's travel shows and in one of them I recall that he drank fermented yak's milk. That sounds rather scary, but people in Japan drink Yakult on a regular basis and it's fermented cow's milk. Somehow seeing Mr. Palin drink from a bowl he's handed by a man who looks like a professional sherpa makes one feel more stand-offish than buying a tidy little bottle of liquid in Japan.

I've been aware of Yakult since my early days in Japan when I first saw Yakult ladies cycling around the city with insulated boxes full of bottles of their freshly made products. They trundled to various offices in the area I worked in and peddled their wares to health-conscious office workers. I never really looked into what the deal was with their drinks, until I decided to review Yakult. Note that this product has been around since 1935 so it has a long history and most people know about it.

You can do a search on Google and you'll get plenty of hits on the health benefits of drinking Yakult. The thumbnail version of it is that it is full of active bacteria cultures that aid in digestion. Mainly, that means that Yakult will put good bugs in your intestinal tract to fight bad bugs. One of the benefits of it is that it can survive your stomach's gastric juices and make its way to the places where it can help the most. This is unlike some supplements that claim to accomplish the same task, but burn up in your stomach before its little buggies can get to where they need to go.

The two bottles that you see at the top are very tiny. The packaging is like a milk jug, cloudy but clear so the color you see is the color of the drink itself. There is only 65 ml. of drink in it. Consider that the average can of soda has 350 ml. and you can get a greater sense of how small it is. The price reflects the tiny size. I bought mine out of a vending machine next to a Yakult distribution center. I had to buy 2 for 80 yen (89 cents) so it's 40 yen (44 cents) a bottle.

After peeling off the foil cover, I gave it a sniff and I couldn't smell much of anything. The first sip revealed intense sweetness coupled with intense yogurt-like sourness. It really is like drinking hyper-concentrated yogurt which is nearly as thin as water. The ingredients include sugar, powdered skim milk, and water. It's not bad at all, and I like yogurt so it certainly wasn't offensive to me, but those who dislike yogurt may find it rather unpleasant.

Here's the thing about health foods and beverages like Yakult; if you have a problem with your digestion, they are invaluable and, if you don't, you're essentially not gaining anything by drinking them. This is full of sugar and you can ingest the beneficial cultures through other means (including probiotic yogurt) without the sugar. This is simply one of the easiest and fastest ways to get them into your body and it's such an old and established product that you can be nearly certain it'll live up to its health claims.

Though I found the taste pleasant enough on the whole, it's not the sort of thing I'm going to be drinking for fun because of the sugar. Sure, it's only 50 calories, but I don't need a sugar shot of good bugs on a regular basis and if I want yogurt flavor, I'll eat yogurt. If I have a stomachache or gastrointestinal problems, I'll probably pick 4 or 6 of these up and drink them for awhile. One of my students told me she likes these as a good wake up elixir. The strong sour yogurt flavor and sugar are likely to pep one up, but, I'm not likely to buy it again unless I develop gastrointestinal problems.

I remember when I was a little kid, my mother used to give me these drinks as a treat. They are very popular in Asian and Mexican households. I usually see small children enjoying this, so that probably explains the small size.

oh wow.. I spent my childhood drinking Yakult without ever knowing about the health benefits. There's just something about the size and the taste that made it so enjoyable. Thanks for the info!

I have so much yakult at home...But I've drank this since I was so young that it tastes really good to me :)

Thanks to everyone who posted! I really appreciate your sharing your memories!

Note that I did like this, but just found it too extreme (super sweet and super sour) to be a treat for the sake of itself. I can very much see someone developing a real taste for this, and actually have had a little craving for it on occasion since having sampled this a few weeks ago.

Thanks again for both reading and taking the time to leave a comment! :-)

Like everyone else above, I love yakult since childhood! I wish they sold them in humongous bottle sizes hehe ^_^

Growing up in Korea (as a military brat), we were told it was given to children to help them grow. Like milk, but milk was powdered or too expensive. So I, too, have loved the taste for years. Now that I live in Japan, my 4 year old loves the drink. (Of course, I buy the cheap off brand, it tastes the same. :)

Hi, Crystal, and thanks very much for commenting and for reading!

I've seen the off-brand varieties in markets and wondered if they were the same. I can also see where kids would love this (because of the high level of sweetness).

I think I'd have been more inclined to drink this regularly if I were comfortable with the idea of drinking sugary drinks, but I've been avoiding them for quite some time and the prospect just never sits well with me. Of course, it's just a personal thing! I can easily see why others love this and drink it regularly. :-)

Been having stomach problems lately so gave myself a good dose of Yakult and it really worked wonders!

In Hong Kong, we too used to drink it when we were young. Love the stuff - get a good sugar kick of out it too.

Yes! Yes!! Yakult was my childhood treat too! Now that I'm older...I still love it. I do know about the high sugar content of the drink so I usually settle for a yogurt instead, but there is no comparison to the super refreshing and delicious taste of Yakult. =)