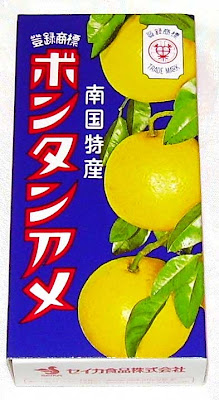 I first learned about bontan ame from Kyoto Foodie's post on it. I had seen it in multiple shops, but the old-fashioned packaging sort of faded into the scenery of treats on display. For the record, I found these in a local market for 98 yen (about a dollar). The point about this which most made me want to try it was the fact that it has edible wrapping.

I've read many times about candies produced in Asia that have wrappers that melt away, but I'd never knowingly sampled one before starting this blog and sampling some jelly candies with them. This is a bit of an old-fashioned concept that many modern snack manufacturer's do not follow.

You can tell by the packaging that this candy is based on a citrus fruit. I've seen it translated as "bontan", "buntan" and "bontang", but that probably matters less than the fact that it's a tangy lemon and orange flavor fruit which grows in Southern Japan. I'm guessing folks can buy the fruit in shops there, but personally I've never seen it in markets in Tokyo and therefore never tasted the real fruit.

This candy was first released in 1926 and the maker, Seika Foods, asserts that this is an original candy and not a copy of another confection. That seems like a pretty reasonable assertion. I don't think I've had anything quite like it in my experiences either in Japan or the United States.

The manufacturer's web site and Japanese Wikipedia pages both describe this as "caramel-like", but I think Kyoto Foodie's description of it as "mochi-like" is more apt. The texture to me seemed like a cross between a gummy or jelly candy and mochi. It's not quite as chewy as mochi. It's like a really thick gummy, but not as tough. The external wrapper, incidentally, is like glue when it melts in your mouth. It doesn't have the taste of glue, mind you, just the stickiness. 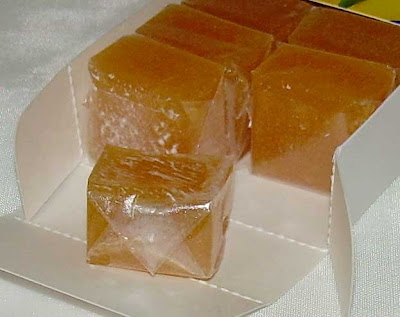 The flavor is like a mellow orange, with a hint of lemon. It's mildly sweet and has the barest whisper of citrus sourness. It reminds me a lot of a far, far less sugary and chewier, thicker version of a Sunkist fruit gem. For the record, I love Sunkist fruit gems. As it turns out, I liked this even more than the gems because the subdued sweetness was more to my liking. Each candy is 17 calories and I'm guessing that is a better calorie count than the gems as well.

At first, I thought these were incredibly weird because of the edible wrapper's bizarre glue-like dissolve and because they're so thick and chewy. Once I got used to the texture though, I loved them. In fact, I had to force myself to stop after eating three of them (there are 14 in the box) and I'm certain I'm going to buy them again and again. Without a doubt, they are going to be the biggest threat to my teeth since I gave up sugar sodas over two decades ago.

I recommend that anyone who likes citrus fruit gems, jelly candies, or gummies give these a try. I do put a caveat on that suggestion though about the texture. I can see how the texture (and wrapper) can be a big turn-off for some people. I'm going to try and get my husband to try one, but I think I may tell him to remove the wrapper first since he's pretty fussy about such things.

These are my absolutely favorite, and LOVE that I can eat the wrapper too, I love mochi, or things "puri puri" in food that is.. hehe

I see that Japanese study is starting to kick in. You're starting to think in Japanese. ;-)

I sent a box of these home with the hub to share with his family and they had zero interest in trying them. In fact, one of the reasons I was annoyed at their "oh, that stuff" response to the snacks I sent back as souvenirs was that I chose them all carefully based on my copious experience, and they acted like they'd just been given a snotty tissue to hold. :-p

And I would be jumping up and down, squealing in delight at getting to try something so new and interesting! See, you guy just have the wrong relatives. I'm open for adoption :o).

The "this is the original, accept no substitutes" line may have something to do with the botan ame (no middle "n") that I've been buying at Asian stores in the States all my life. They sound like exactly the same thing, although yours are aimed more at grownups (no stickers). I'd seen the bontan ame plenty in my travels through Kansai and never made the connection. In fact, I'd always wondered where the darn botan ame was!

Hi, Kathy, and thanks so much for reading and taking the time to comment!

I also sent them my favorite brown sugar sembei, some edamame sembei that I really enjoyed, and Heart Chiple (which I love), and none of it lit any sparks of delight. I went out of my way to avoid cliched stuff, though my husband wanted to give them a bag of ramune KitKats (and they didn't care about those either).

I would definitely agree that I got the wrong in-laws! Though I think I'm too old to adopt anyone. ;-)

Hi, Nora, and thanks so much for your comment and the link! It was very interesting to see that! I've never seen that variety, but I'd really love to try it. It definitely sounds like the same thing. :-)

The botan candy Nora linked to is pretty yummy and can be found in quite a few regular grocers as well as Asian markets. I know I've seen in in the Neighborhood Markets (walmart's free-standing grocers) and Fry's food.

My boyfriend just made me try these tonight and I searched Google to see if you had any comments on them :)

I also love them now! So delicious! The edible wrapper is quite a novelty and I like it.