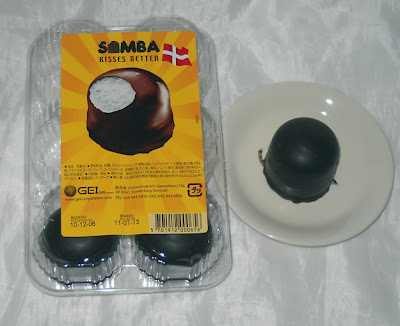 Samba Kisses Better has to be one of the worst names I've ever come across for a product. It's too long, not the least bit descriptive, and frankly sounds dumb. I have to wonder if the name  makes more sense in Denmark, the home of GEI Corporation and maker of this treat.

Samba Kisses Better are currently being marketed rather aggressively in Japan. They aren't widely available in basic markets or convenience stores, but they are being sold at stands outside of major stations, in department stores, and at select shops. I have found them at National Azabu Supermarket in Hiroo, Village Vanguard in Koenji and at Okashi no Marche discount snack shop. They have a FaceBook page which details exactly where you can find them in Japan. Though the company originated in Denmark, they currently have a main office in Yokohama and are clearly situating themselves to be a bigger player in the Japanese confection market.

I've known about Samba Kisses Better for quite awhile, and have bought them at least 4 times as of writing this post. I never considered reviewing them because I didn't think they seemed "Japanese" enough, but the truth is that this product is not available worldwide and is being sold here more and more. If you live in Japan, you may have seen it on offer for between 350-400 yen ($4.33) per 6-pack, and not known what you were missing. 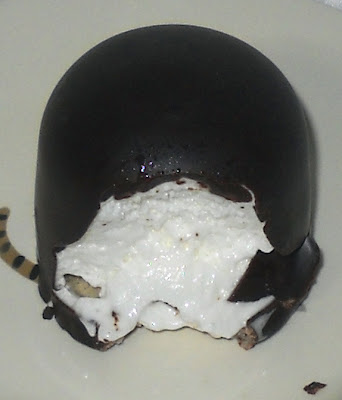 The exterior of a Samba Kisses Better is a wafer thin shell of moderately dark and every so slightly bittersweet chocolate surrounding a sweet, cloud-like filling of whipped egg whites and sugar. The interior is like the fluffiest, lightest, tastiest marshmallow you can imagine perched on a super thin wafer base. The slightly crispy shell of the chocolate makes a delightful contrast to the almost whipped cream-like interior, though it can be messy to eat as the high dome means you may get the cream on your nose when trying to bite into it. The base, incidentally, is not a hard wafer and really doesn't do much other that provide structure to keep this from collapsing when you eat it. That's okay because the chocolate and foamy filling do all of the heavy lifting on both the taste and texture front. Note that there is no nutritional information on the package, but I tracked down a page on the web (not GEI Corporation's) which claimed that these have 77 calories each. That sounds about right for the size and sweetness.

This is absolutely a hit with me because I love marshmallow and meringue and this is like the most glorious love child of those two elements ever. I can't imagine that anyone could make this style treat any better than this. If you like chocolate-covered marshmallows, then this is the caviar version of it and I strongly recommend tracking some down.

Wow, this one looks really really good. Oh, I'm going to have dreams about this one tonight....

This is not worldwide? I never knew! Here in the Netherlands we have them too. And in other countries I came across them as Angel Kisses :) I love eating these :)

Oh wow, didn't knew they were sold outside Denmark (yes I am fron Denmark) In DK we mostley give them to kids at birthday parties or when someone does somthing stupid, haha :)
Never really liked them myself but then again, I ate them through my entire childhood. I do remember having some small ones (almost like petit four) with different tastes such as strawberry, coffe, vanilla, nougat stuff like that :)
My dad thought me to hollow out a huge loaf of white bred and stuff it with flødeboller <-- the danish name for it. Taste pretty good haha :D

I -think- that the fluffy centres of these is almost identical to a product in the US called "Fluff" which comes in a big jar. I'm a huge fan of "Tunnocks Tea Cakes" which are the UK version; I could eat a box of six all at once!

Thanks to everyone for the comments! As always, it's greatly appreciated!

Uniflame: I wish they were worldwide! I checked for American access, and there appears to be none!

Debra: I checked the information on Fluff, which I remember eating in the U.S. and I recall it being sticker and heavier than the center of Samba Kisses better. It's made with corn syrup, sugar syrup, powdered egg whites, and vanillin. According to the maker of SKB, these don't include corn syrup, sugar syrup, or egg powders. I'm guessing the syrups have a profound effect on the lightness and texture. Trust me, these are better than Fluff! (Not that I didn't enjoy eating Fluff out of the jar when I was a kid, and not that I almost certainly wouldn't enjoy it again!)

I wonder what a Samba is. is it a reference to the dance originating from Africa and made popular via South America? Hopefully the marketers for that European company weren't trying to capitalize on the joy some Japanese derive from the little black sambO. http://www.japanprobe.com/2007/12/04/black-sambo-in-japan/
It does look delicious though.

locohama: It's a refferances to that they are black. Back in the old days in Denmark they where called negro buns. But people found it very racist so they changed the name :)

@michelle Yeah, Unlike Denmark (though they had no problem going back to identifying their treat racially for marketing in Japan) apparently some Japanese are a little slow on the uptake when it comes to racial sensitivity. Evidenced by this and many other things I've seen here. (black faced fashion, minstrel acts, etc...) syougannai.But thanks for the info on Denmark. I figured as much.

I will say to all that it's not marshmallow that's inside but meringue :)
The interior is pretty much an italian meringue covered with chocolate :)
An for those who don't know what italian meringue is, it's just like regular meringue only made with syrup instead of just adding the sugar to the whites :)

Michelle: Indeed! That's why I said "it's like marshmallow", but said it's whipped egg whites and sugar. The problem is that (I think) most people think of meringue as the hard stuff that dry cookies are made of and I didn't want to confuse anyone. This is why I likened it to marshmallows rather than meringue. However, you are correct that it *is* meringue!

"one of the worst names I've ever come across for a product." No, it's far from the worst I've heard for them.

As Michelle already commented there were some racist name used in Denmark.

It seems this kind of treats were invented 200 years ago in Denmark and traveled quite a lot. As a result they were often named in a way that was deemed "normal" in those times, but would be quite offensive nowadays in most part of the world : like "Negro's Kiss" in post WWII Germany.

I loved them a lot where I was young : but the fresh meringue was sometimes a bit too "fresh", and I preferred to wait for some days, when the meringue would start to get a bit harder.

I wonder how does the taste of my memories relate with this japanese version.

(And please excuse me for my far from perfect English)

I tried something like this just today and I love them! The ones I tried are called Pure Chocolate Whippet, made by Dare Foods, I think they come from Canada. I live in the States and picked them up at a store that carries treats from Canada, England, etc.

Funny thing is I don't like dark chocolate, but I liked it on those. Maybe because it was so thin, and the ones I tried had a bit of raspberry filling, so everything combined was very nice. It's like they just melt in your mouth.

Yum! These look just like the Krembos you can get in Israel. They are only sold i the winter months. So good!

You can make them by yourself at home, many just use marcipan as buttom. :)

You can make them by yourself. Many just use marcipan as buttom. :)

I think it's more accurate to say "you" can make them yourself. ;-)

Trust me when I say that Japanese stores and kitchens are conducive to this sort of food preparation. Almonds are sold in tiny little packages here, marzipan not at all, and I'm pretty sure I couldn't whip the meringue without better equipment.... not to mention making this for myself would make it harder than ever to blog 10 posts a week. ;-)

Hey you should review this ... Since it's something I think you'd really like :) I mean, it's certainly in the same marshmallow/gooey category :)