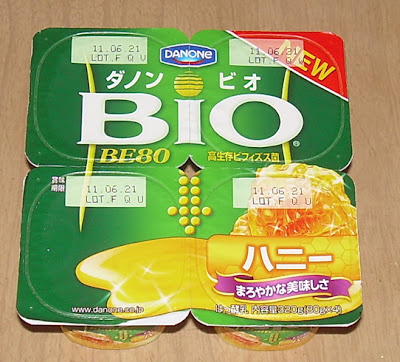 When I was a kid, I hated honey. My mother used to love to slather it on bread or toast, but I was so fussy about texture that I hated the way it tended to sink into the bread and make it mushy inside and leave it kind of crusty on the top. Since I was a kid, I didn't realize this problem could be easily solved by slathering the delicious evil of butter on the bread first. I'm sure my mother didn't mind my staying out of the honey though. It meant all the more for her.

I'm also not a fan of the sometimes strong sweetness associated with honey when it is applied too liberally, so I tend to avoid it in general. In Japan, however, one can always assume anything which is expensive will be applied with a light touch, and I imagined this yogurt wasn't going to be cloying. Incidentally, in Japan there are two types of "honey" on offer. These is the real stuff which is outrageously expensive for tiny amounts and there is "honey syrup", which is big bottles of the stuff for a reasonable price but is actually honey mixed with other types of sugar syrup. If you're shopping and want it for health benefits, it's best to avoid the latter.

Danone is the name of a French company which sells healthy foods and operates in Japan in conjunction with Kirin (best known for its beer). The brand in Japan is focused pretty much on yogurt packaged in very small containers. Four 80-gram (2.8 oz.) cups cost 218 yen ($2.72) at Seiyu supermarket so it doesn't come cheap. The "Bio" line includes live yogurt cultures to improve digestion.

I picked this up partially out of curiosity about the taste, but also because I now pack a lunch twice a week for part-time work and this seemed like a good addition. The portion size allows for about 4 spoonfuls of something sweet and nutritious at the end of lunch and at only 71 calories per serving, it's no worse on the hips than a mini KitKat (and a whole lot better for me). 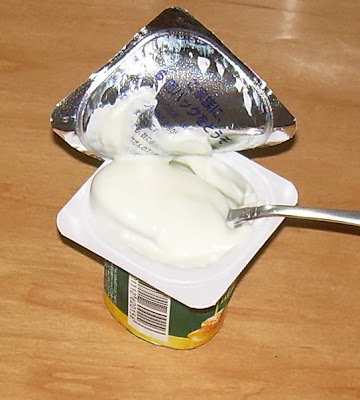 There is no visible indication that honey is mixed in, but the flavor is definitely there. It's just strong enough not to be lost in the slightly sour yogurt without being overbearing. The place where the yogurt really shines though is the silky, rich texture. This was incredibly smooth and creamy. I have a feeling that, when I go back to the U.S., nothing short of high quality Greek yogurt is going to live up to the incredible texture I sometimes experience in consumer-level Japanese yogurt. Yes, the portions are small, but they really make you want to savor every bite.

I really enjoyed this, and was sorry to consume the last one. That being said, my very positive experience with this makes me more inclined to sample the other flavor varieties that are out there. If you enjoy a bit of honey with your yogurt, this is a definite "don't miss".

Just a gentle reminder that there is a contest running for two weeks to win a few snack and snack-related goodies. If you'd like to enter, the details are in this post.


The contest winner will be announced this weekend. Thanks to all who took part!

There are quite a lot of varieties of Danone's yoghurt in my country too but I never saw this honey yoghurt..
Hopefully they will also release it here soon :D

I see that they are the same company as Dannon in the states. These are just like Dannon Activia, I wish we had a honey/flavor stateside.