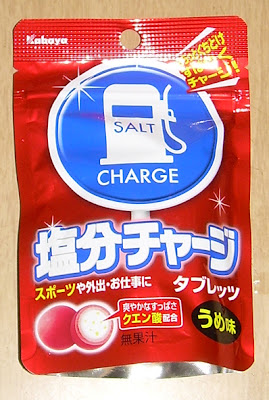 Now that I only do two reviews per week, I feel somewhat obliged to choose more interesting products. I'm guessing this will last a few weeks then I'll go back to reviewing various chocolates and cookies which are not only more pedestrian, but more readily available. While talk of Japanese snacks often focuses on the bizarre, the truth is that not so much of what is on offer is all that strange...at least not after my years of already reviewing various snacks.

In light of my current mindset, which is somewhat guilty at reducing the number of reviews, I didn't hesitate to snap up these oddly flavored sweets. It didn't hurt that they were only 69 yen (90 cents) at Okashi no Machioka snack shop. The fact that they are plum (ume) isn't really all that odd, but the fact that they position salt as a favorable aspect is. The Japanese clearly aren't as uptight about salt as Americans, who are told constantly that salt consumption is a one-way ticket to a heart attack.

This is part of a series of "tablets" Kabaya is releasing to meet various needs. Others include Calcium, grape sugar, and amino acids. The Calcium is to help you not grow old looking like a question mark and the grape sugar is to fuel your big brain's function. Amino acids are to help with muscles. All of them are positioned for people engaging in sports, except Calcium which appears to be for old people who do stretching exercises and mothers pushing babies in prams. I guess the salt charge is to help you replenish precious sodium that you've excreted through your pores during your vigorous workout. Since most Japanese folks I know exercise once a month or so, I can't imagine much demand for these except for those people who think a plum-flavored salt lick is a good time. 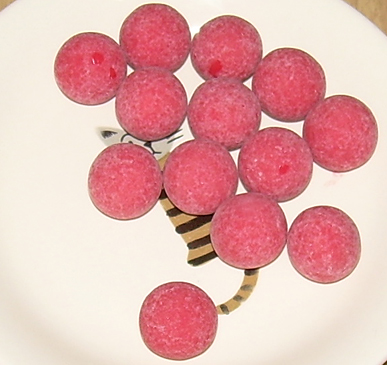 Though these are called "tablets", they are balls. I think "tablet" in Japan merely means it has some pressed powdery component, which these do. The outside is a hard suckable candy and the inside is pressed citric acid powder, salt and sugar. Besides supplying you with precious salt, they also offer Vitamin C, B2 and amino acids. The whole bag provides 150 calories and there are 14 little balls in the bag, so about 10 calories each.

In terms of the taste, the outside tastes a lot like the Mintia plum mints that I liked so much. It's both sweet and sour in a fairly balanced way. It tastes funky, but good. The inside, which takes several minutes to reach, is white powder which is quite salty, but also tart. It's not bad, but I could have done without the middle and stuck with the outer shell.

These aren't bad, but they are weird. They're the kind of thing you might find enjoyable in exactly the right frame of mind, but you're more likely to take if you really feel you need the "health" benefits of the additives.

I have been using "salt candy" all summer due to the heat and the fact that even with the electricity problems and heat/humidity I exercise quite a lot. When you sweat a lot you not only need to drink a lot of water but you need to replace the salt you have lost through the sweating. You can do this with sport's drinks of these sorts of "candy." These "snacks" started out on the market as a sort of aid for people who sweat a lot due to manual labor or exericise and sports. They used to be somewhat difficult to find. Due to the things going on this summer the market seems to have expanded and you can find all sorts of "salt candy" every where.