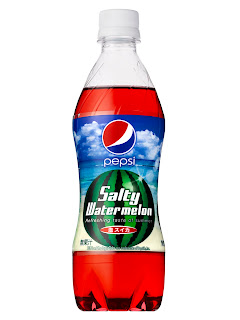 This is just a quick and brief post to say that the weird Pepsi flavor that everyone (no one?) has been waiting for is going to be "salty watermelon". This isn't a bad flavor choice actually, as watermelon and summer are inextricably linked and the Japanese do salt their melons. If you have sub-par watermelon which isn't sweet enough salting it a little will make it taste better. The same goes for apples. However, don't salt your fruit like you do your fries or you'll be filled with regret.

This flavor will be released on July 24, 2012 and will be in a 490 ml. bottle. This continues Pepsi's new trend of slicing 10 ml. from their drink bottles. Pepsi says that the graphic design featuring a big melon in front of the ocean is meant to bring to mind "the joy of summer". Given that Japan is going to endure another year of "setsuden" (energy conservation) as their energy woes from the nuclear problem in Fukushima continue, they'll need to extract all the fun they can while they cook in air conditioners set to 28 degrees C./82 degrees F.
Posted by Orchid64 at 8:40 AM

I would love to try that! Being of Mexican decent, I know about salting melon. I actually use a chili lemon powder called Taijin. :P
I might have to ask my hubby's cousin to send me one of these, thanks for the post.

Oh! I didn't know about salting melon and apples, that sounds interesting. I wonder what it tastes like.

Is 28 degrees C warm? I set my air conditioner to that temperature and it's plenty cold :o