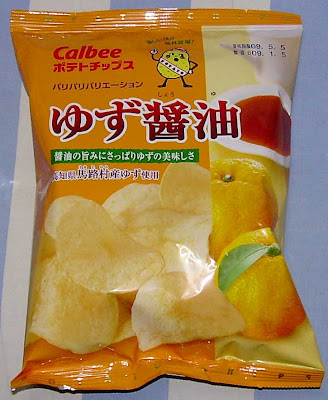 If you spend any reasonable amount of time in Japan, you'll notice that flavors come in and out of fashion. Some flavors stay after their run of popularity and others vanish. Right now, we're riding a wave of yuzu flavored foods. First, there was the yuzu KitKat and recently I spied some yuzu sembei (rice crackers) and now these chips. I'm sure there is more out there and more yet to come. In case you forgot, or don't know, yuzu is a Japanese citrus fruit that is a little like lemon in terms of how it is used. It is frequently added to sauces (including soy sauce, or as it is called in Japanese, shoyu) and used for dipping other foods.

Yuzu is pretty flexible and can be used in both sweet and savory food effectively. Despite the fact that it's sour and can be bitter, it's one of the more approachable flavors for Western folks because it tends to be used in relative moderation when flavoring foods, so I bought this bag with relatively positive expectations. 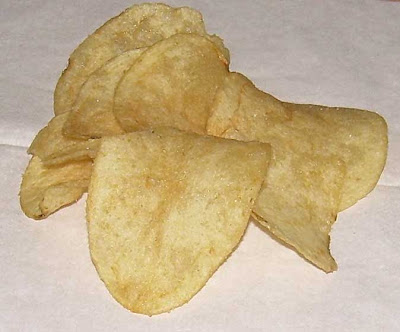 The big one is sticking its tongue out at you.
The chips smell a bit like lemon, pepper, and vinegar. I'm sure that they smell just like yuzu to Japanese folks, but I'm trying to frame their scent with Western nostrils. They taste tangy and citrus-like with an extremely mild bitter aftertaste. The soy sauce element is quite subdued and mainly manifests itself as a lingering "meaty" taste. It adds a bit of savory balance to the tart yuzu flavor.

These chips are flavored with a lot of classic Japanese flavors. Besides yuzu and soy sauce, there is also katsuoboshi (a sort of fish flake) and kombu (a type of seaweed) flavoring in these. The only thing I think I'd like to see is a little more salt on these.

Most chips work best when paired with food as an accompaniment, but these are the kind of thing with a distinctive flavor and are good eaten alone with just a beverage. They're very good, but not the sort of good that makes you want to scarf them down. I think that these would be enjoyed by anyone who likes salt and vinegar chips or lemon, though they may seem a bit strange to some folks. I'd definitely sample these again if they don't vanish forever once the yuzu fad is over.
Posted by Orchid64 at 12:00 AM

I wonder if there is straight up shoyu potato chips? And if there are, are they black-ish?

I believe there are/have been straight shoyu chips before. I think there may actually have been some in our local market last time I looked, but it may have been a mix with nori. I didn't read the characters particularly carefully.

One thing I can say is that they won't be black. That'd be spiffy if they were, but I think people would assume they were burnt. I'm guessing some sort of dried seasoning would just be sprinkled on them.

I just thought i'd come to your site and see if you updated and yes you had. Bloglines is backed up again so i've made a permanent link on my favourites. Last time it did that and then one day i logged in there was about 10 posts from you. Strange!

Anyway, i thought these chips looked very light yellow, not the usual colour of potato chips.

I love salt and vinegar chips so maybe i would like these. Though i'm not a big yuzu fan. Interesting flavour though!

Marvo, the shoyu kit kat was white, so i doubt that anything flavoured with shoyu would be black-ish because they can manipulate the colour.

I think the yellow may be the lighting in my living room or my camera's shortcomings. I have a pretty cheap camera. ;-)

I should have mentioned (to Marvo) that there is white soy sauce in Japan. One of my students swears by it with her cooking, but I've never tried it. As you said, the color can be manipulated.

I like vinegar and chips (or with french fries) I've found that I don't particularly care for the Yuzu spiked foods, not sure why.. I do love the aroma and how did I miss your SP kit kat.. =)