Raise your hand if you have never eaten banana bread. Okay, now keep in mind that you are sitting in front of your computer and no one can see if you've actually raised your hand and leave me a comment instead. Anyone who has ever eaten a real banana or a baked good made with them knows what they should taste like. I'm guessing that the makers of most banana-flavored mass-produced snack foods either don't know or don't care because they never taste right. 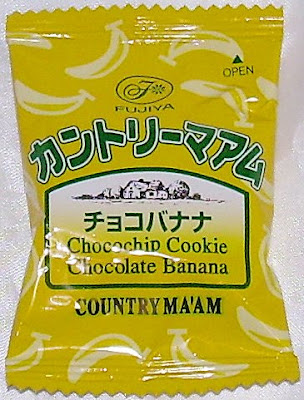 The fact that banana-flavored items almost always fail is one of the reasons I never buy them for sampling. My husband, on the other hand, is more open-minded and is willing to subject himself to such things. He purchased these Country Ma'am cookies at New Days convenience store for around 120 yen (about $1.20) for 5 half-dollar-coin-sized (100-yen-coin-sized) cookies. Each cookie is 51 calories. 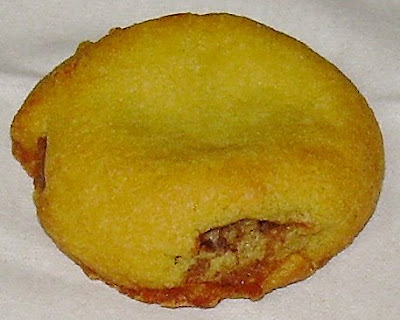 They smell like fake banana oil or esters, but the ingredients list claims they're flavored with banana juice and banana puree. Of course, they're also flavored with "cheese", which is exceptionally weird. The package says they're "the American traditional homemade country cookie", but I'm pretty sure we're not putting cheese in our banana cookies back home. 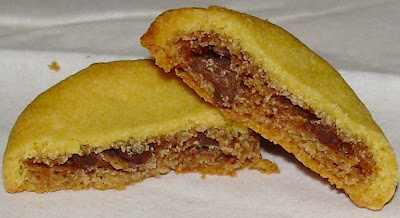 Like all Country Ma'am cookies, they have a somewhat crispy cookie shell and tender, chewy interior. They're good on the texture front (as always), but the taste is so overwhelmingly strong in terms of the banana flavor that I find them pretty unbearable. My husband, who has a weaker sense of taste and smell than I and likes banana-flavored things, said he thought they were good, but did taste like they had fake flavoring. I have to give Fujiya credit for managing to make these taste like they have fake flavoring even when they have real flavoring. It's quite an achievement. My husband says he'd buy them again. Personally, I ate one half of one cookie and that was all I needed. I've certainly had worse than this, but I won't be fighting him for the rest of the bag.

I didn't even know people make banana cookies. Banana bread...yes. Anyhoo, I actually do enjoy the flavor of artificial banana, but I'm weird like that.

I wouldn't count out the possibility banana!cheese oreos... once molecular gastronomy makes its way to the snack aisle...

My first reaction when I saw the title of this entry was,"Oh dear God, no!"
I really hate bananas, but I usually don't mind banana bread....the texture is much nicer than a plain old banana. However, I really don't like fake banana flavouring at all.

I will not be trying these cookies. Thank you for saving me from them!

Marvo: Yes, you are weird, but that is why everyone loves you so much. ;-)

Karen: Nooooo! No cheese in any cookies (except cream cheese). The horror!

Helen: I think that this would be the sort of thing they'd feed you in prison as a form of cruel and unusual punishment!

I am another one of those people who loves bananas and hates banana flavoring. I think it stems from the time we made some in chemistry class.

But my husband would probably like these, too. He loves banana Runts, among other banana-flavored things that no sane person would eat.