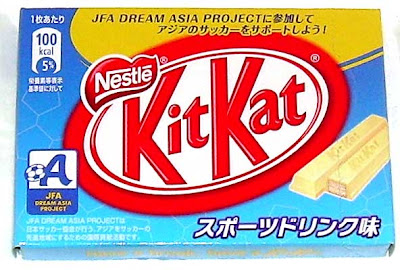 I'm not sure how many people out there have never drunk a sports drink, but I'm one of them. I've just never seen the appeal of drinking anything after exercise besides water. It hydrates and it is free. I guess that's part of the reason people are told they need to restore their bodily balance with potions concocted by expert beverage makers. They aren't going to make any money off of you if you drink water. Nonetheless, somehow primitive man managed to make due after a big bison hunt with water, so I think I will survive as well.

In Japan, there are a plethora of sports drinks which I've never sampled (and probably never will). I once read that sports drinks are essentially Kool-aid types of drinks with salt added and that turned me off. It also set up some expectations of this bar which were not very high. I was in for a bit of a surprise. This was nothing like what I had expected. 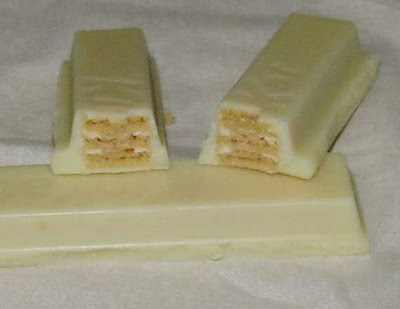 The bar smells a bit like lemon-lime or grapefruit. Despite being white chocolate, it doesn't carry the "sweet" smell I associate with it. The taste is a melange of fruit flavors and yogurt. It's sweet, but not painfully so. I think that the part of this which resembles citrus fruits (mainly lemon) and the sourness of yogurt balances out the sweetness. If this is really what a sports drink tastes like in Japan, I may give one a try some day.

I was surprised to find that I liked this and even more surprised to that my husband liked it. He doesn't like yogurt (or grapefruit), but he enjoyed this. I think that anyone who liked the lemon KitKat might also like this. I'd certainly buy it again. Note that this was released on June 22 so it should be around for awhile.

Oooh, now that's one to send home for friends and family to try! Where did you buy it?

We bought it at Seiyu supermarket, but I think it can be found at a lot of major convenience stores as well. That being said, I didn't see it at 7-11 or Family Mart!

Why am I not surprised Japan has Sports Drink KitKat? I think they have reached the point where they can introduce any odd flavor and I won't surprised by it.

Of course, I would really be impressed by a tenuki testicle flavor.

The number of sports drinks in Japan that taste the same is kind of maddening: Pocari Sweat, Dakara, Aquarius...so this KitKat really makes sense. I never got a chance to get it when I was in Japan last month, and now I'm a little disappointed!

Ooh, I want to try this one.

While you can't go wrong drinking water, sports drink restore salts and electrolytes that your body loses when it sweats. That's their up-side.

I found mine at a am/pm convenience store in Shinjuku! Surprisingly, they had the best selection of kitcats.

The best way to find out about famous people's net worth is searching for their name on celeb networth then click.