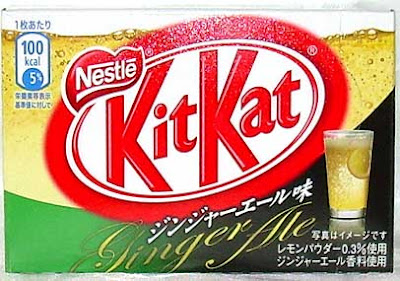 I must admit that I didn't see this flavor coming. Of all of the things that Nestle Japan might have come up with, I didn't think ginger ale would be on the list. It's just not a very "Japanese" flavor, nor is it the sort of thing I expect chocolate to be flavored with. Maybe ginger ale is the next big fad flavor in Japan and this Japanese KitKat is meant to get the ball rolling. My husband recently noticed that a diet version of the venerable Canada Dry brand has been added to the shelves in many stores after years of it being only around in a version with sugar.

My husband found this for 120 yen ($1.32) at New Days convenience store, though I expect it'll show up at other "conbini" as well. That being said, I went to three other convenience stores (Lawson's, Family Mart, and Mini Stop) and none of them were carrying this. My guess is New Days gets a lot of things first because it's unlikely that a KitKat would be available in such a limited fashion. 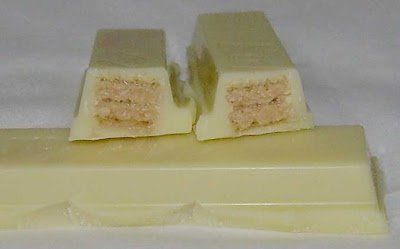 The interesting thing about this bar is that it does smell like both lemon and ginger ale. It tastes like quite sweet stale or flat ginger ale with a lemon slice in it. Actually, it's more like ginger ale with some juice squeezed in it then the rest of the lemon tossed in. The lemon element is pretty strong, but it doesn't overwhelm the ginger ale flavor.

This is an amazing triumph in terms of making something taste like something you'd think it couldn't taste like. Who would believe that a candy bar could taste so much like ginger ale? That being said, authenticity in taste doesn't necessarily translate into a great candy bar.

This is interesting, for sure, but it's not really "good". I'm glad my husband was around to share it with me because I'm not sure I'd want to spend 100 calories on eating even half of it myself. That being said, I don't think I'd want to throw it out. It's not that bad, but I also don't want to eat the rest of it. I'm thinking of sending it to a friend to try, but I just don't know who would make the best guinea pig.

This was also reviewed on Pocky Watch and Jen's KitKat blog.

I bought one of these on Saturday but haven't tasted it yet. Maybe I'll just give it a miss and send it to my curious KitKat-loving friend back home! It's interesting seeing these obscure flavours appearing, and yet there seems to be no sign of the most obvious potential hits (I'm waiting for a dark chocolate/coffee version).

I think I'd actually love this--I have always loved the combination of lemon and ginger. I like mixing ginger ale with lemonade, too. Wish they'd have some of these Stateside, and not just in specialty import stores!

If I had a chance to pick a flavor, I would choose white choco with pistachios.

So it didn't work with the chocolate for you? Hm, it still sounds like a tasting experience.

I've only spent 10 days or so at a time recently in Japan, but on my most recent trip, I did notice that ginger ale seemed to be a choice at every (cheap) restaurant and karaoke place I went. I didn't spend a lot of time there to get a good idea, but it's rare to have ginger ale at restaurants in the US.

Hmm...I wonder if they would ever make a Coca-Cola KitKat. Actually, now that I think about it, it's probably been done.

Re: ginger ale being everywhere (including cheap dives) - I think that's because it's used as a mixer for alcoholic beverages.

I think the main reason neither my husband nor I liked this was the flat/stale ginger ale quality. A lot of the pleasure of a soft drink, particularly ginger ale, is in the bubbly aspects. Without the bubbles, it doesn't work so well (at least not for us!).

Marvo: I think a Coca-cola one hasn't been done because it'd require some sort of deal with Coke, and I don't think Nestle Japan would make it since they're competitors in the soft drink business (Nestle with canned coffee and Coca-Cola bottling with their own canned coffee).

Hey Anchan,
I know they released a coffee/espresso bag of mini's, so you might be able to find it in the supermarket. http://www.napajapan.com/Product.asp?product=209

I was surprised to see Canada dry ginger ale in Japan the last time. I'd love to try this though!