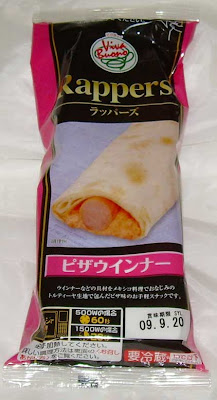 Several days ago, I spent some time listening to a lot of Weird Al Yankovic's somewhat more recent releases. Every time he said the word "wiener", it struck me as funny, especially when he used it as a euphemism for a male body part (because Al's songs are PG-friendly). It could be my inner juvenile asserting itself, but I think it has more to do with how Al sings the word. After all, he's a pretty funny guy. 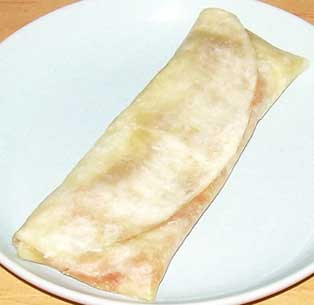 I'm not sure if it was hearing him say "wiener" in his songs or if this simply looked like the better of a dismal selection (2 choices) of heat and eat burritos at the market, but I picked this up to eat when I was in a bind for something fast. As I've mentioned before, I rarely eat this sort of prepared food because it is bad for you, low quality and expensive in Japan. As I also said before, I would be more than happy to do a Heat and Eat Review style blog of Japanese food if there were enough of it around and it didn't suck so bad. 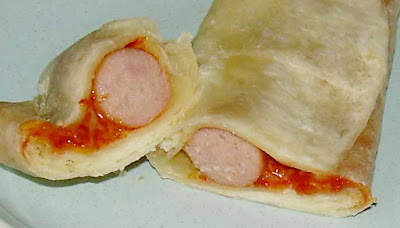 The forces that drove me to this type of food were copious amounts of badly-scheduled work. Even though I work from home, there simply was insufficient time between lessons and jobs to whip up something homemade and clean up after it. So, I had a choice of anemic, badly-made bagels in 3 flavors (blueberry, caramel, and ham and cheese), refrigerated pizza and pizza bread with almost no cheese or meat on it, and either a ham and cheese or "pizza wiener" Rapper. I chose this because it seemed to have the best protein potential due to the "wiener", but my expectations were very low. For what it's worth, this contained 311 calories and 15.2 grams of fat (8.9 of saturated fat), but I would never expect this kind of food to be healthy.

This smelled mainly like the wiener. Japanese hotdogs are a bit weird and clearly made with different meat or spices than American ones. A lot of people find them inedible because of this. The wiener in this was not nearly as intense with the strange flavors as some I've had (particularly on pizzas). It did have a very tough casing that was hard to bite through and a pretty mushy interior.

Mainly, this tasted like the hotdog. The "pizza" aspect was pretty close to non-existent. It's mildly spicy in a nondescript way, probably from whatever spices are in the wiener and a bit of a tomato flavor mixed in. The cheese had no flavor and added only texture. I was sure that it was processed cheese, though the ingredients said it was "natural cheese". The tortilla is okay, not bad, but a bit gluey and it sticks to your teeth (as does the cheese).

All in all, this wasn't horrible, but it left me with a stomachache for some reason. It filled the empty spot and it did it fast and with minimal mess (save the knife and plate I had to use to cut it for picture-taking). I also have to give the manufacturers credit for not making it look better than it really is with a misleading picture on the label. I wouldn't buy this again, but I can't say it didn't meet my expectations. That's mainly because my expectations were appropriately low.

And note that I know this wasn't a "snack", but I figure that I eat these so infrequently that a review now and then of these things might be interesting. What is more, I definitely want to remember how I feel about these so I won't buy them again. :-p

I find that Japanese weiners taste to me like the salami they use on pizza's. I only just noticed that last time, but it's alot different to what I expected it to taste like.

I am a big lover of pastry, and the pastry on this kind of seems yummy, well, it looks nice and soft, did it taste ok?

How much does one of these cost? :)

You find the most unique foodies to try here in Japan... I am not too much of a dog fan (hot dog) but I LOVE Moss Burgers hot dogs... I heard they work only with organic?

Kelly: the wrapper was a basic flour tortilla - a bit too moist because of the way its packaged. It doesn't taste like anything really. I can't recall what I paid for it, but I think it was 240 yen. It wasn't cheap for what it was, but that is often the case with convenience store food.

April Marie: We used to have a Moss Burger about 5 minutes from us and I loved their hotdogs, especially the spicy chili dog. I'd probably indulge in one every month and a half or two, but since that nearby one left the area and the nearest is a 20-minute walk away, I haven't had one in ages!

All of the processed food wieners taste pretty funky to me, but the Moss Burger ones are good!

Thanks to both of you for commenting and reading!

There's an American show I like called 30 Rock that is based on Saturday Night Live. Recently, there was an item on that show that looked a whole lot like these, only with cheese.