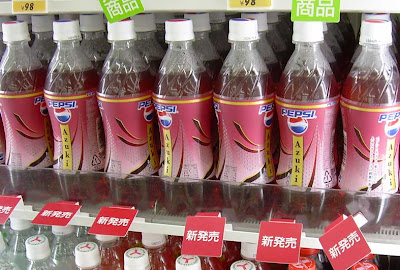 Of all of the strange drinks I've tried, this one presented me with the greatest mystery. Like the Ginger Ale Lemon KitKat, this product represents a flavor that you can't imagine being incorporated into this particular type of product.

I rarely sniff something and think "smells like barf". Pepsi Azuki smells like someone threw up their bean cake. This was not a promising start. It does smell like azuki that has gone off a bit though, so I guess that is something. This was the weirdest color of Pepsi that I've ever seen. My guess is that it was tinted this color to resemble red beans. In the right light, it's a deep pink. In somewhat darker light, it's a ruddy red. The bottle is 207 calories for 490 ml. and I picked it up at Family Mart for 147 yen ($1.62).

The taste isn't nearly as bad as the smell lead me to believe it might be. It mainly tastes like jasmine with a red bean chaser. There's nothing in it which says "Pepsi" to me though. The jasmine flavor is slightly flowery, but dry so that it doesn't seem too perfumey. The azuki bean part hits you at the end and the jasmine at the beginning. This works a bit better than the opposite might.

I wouldn't even ponder buying this again. It's not intolerable or anything, but it's pretty weird. The jasmine part is pleasant enough and makes me wish they'd make a jasmine Pepsi (if they're reading, I may be giving them ideas). If this was sugar-free, I'd finish the bottle, but I'm not spending 207 snack calories for the novelty of drinking the whole thing.

I'm going to have to buy a bottle of this if I can find it, just so that I can say I've tried it! Doesn't sound too appealing though. I really liked the shiso version they brought out earlier this year, but it wasn't around for long.

anchan: I think Pepsi finds success in these from those of us who try it just to say we've tried it. ;-) It's the reason I buy them, too!

Marvo: I find the texture of the beans to be the best part. The taste is good or not so good based depending on the mix (at least for me).

Thanks to both of you for taking the time to comment and read!

I'm looking forward to trying this one! :) I love the colour, it's almost like pepsi wine. :)

I think I would have loved the shiso as well.. I love shiso dressing.. non-oil.

I can't wait to see what you post next!!!

In my opinion, it tastes like lipstick. Seriously, that was the first thing that hit me. Maybe they're onto something with that idea...

I don't wear lipstick, so I don't know what it might taste like (and my husband doesn't wear it either so I don't know it from kissing ;-) ). I wonder if there is some chemical that Pepsi Azuki and lipstick. It did taste pretty funky.