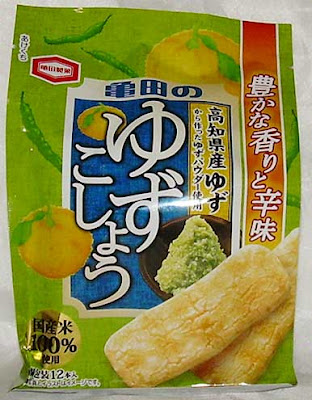 I sometimes wonder how my approach toward snacks would be different if I knew more about the finer points of Japanese cuisine. I'm certain that plenty of traditional spices and flavors are used in the foods I sample, but I don't even realize it because I lack the proper culinary context. In the case of these sembei, I discovered a new seasoning, yuzukoshoo. It's a fermented seasoning paste often used for things like soup and sashimi.

Because I've turned into quite the yuzu fan, I couldn't pass up this sembei, so I snapped this bag of 12 crackers up at Family Mart for about 150 yen ($1.65). For those who are new to this blog and don't know about yuzu, it's a sour Japanese citrus fruit which is similar to grapefruit in flavor. It's used in many sauces in Japan.

These smell of citrus, sembei, and something which is hard to pinpoint (possibly the chili aspects of the seasoning paste). They smell good in a way that an interesting savory meal might smell while it's cooking. The flavor is a perfect blending of savory elements including the yuzu's citrus, chili, baked rice, and other spices like onion and garlic. There's also something which is ever so vaguely fishy. The texture of the sembei is fresh, light and crispy. Each is 29 calories, and I ate far too many of them at once.

I found these to be a sublime joy and I would definitely have them again. They're one of Kameda Seika's convenience store-only offerings so you'll have to find them at one of the big name conbini. Their web site says that these will only be around for 4 months so run out and get them soon.

These look really good! I was just chowing down on some pepper and lime potato chips myself then I looked at your review...I'm getting the vibes Orchid! :) I love yuzu! I really miss that flavour..

If you can get them through your usual source in Japan, I highly recommend that you do! After re-reading my review, I wanted to go get another bag!