When I first came to Japan, I didn't understand anything and there was all of this cryptic food in stores. Generally speaking, Western folks spend their first few years eating a lot of junk because they have no idea what sort of surprises await them when they pick up a box of something or other. Depending on your early experiences with these mystery foods, you might be encouraged to continue to sample more of the same, or never touch such things again.

In the spirit of sampling those mystery foods that have been on my back burner for a long time, I picked up this box of "Nakano kombu". Kombu, incidentally, is the Japanese word for edible kelp. When I saw this box nestled among the packages of caramels, knock-off M & M's, and other small treats packaged for kids, I figured that this was going to be some sort of faux kelp that was actually candy. When I opened the box, I found out I couldn't have been more wrong. 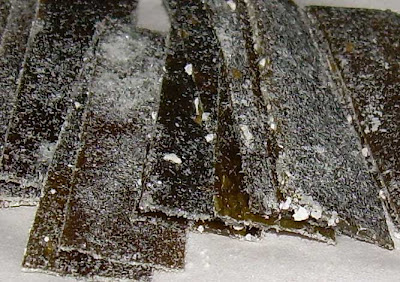 Inside the box are about a dozen leather-like strips of dried seaweed coated with some sort of starch to keep them from sticking together. The ingredients list for this includes two artificial sweeteners, Sorbitol and Stevia, as well as fish flake flavoring. I can tell you that this tastes as good as it sounds. Kelp + fish flavor + sugar. Mmm, mmm, good.

I try very hard to give everything I sample a chance and to eat at least one good bite, if not two or four, but this was the most vile thing I have ever eaten. I couldn't even eat one thin slice. The strips are small, about 7 cm x 2 cm (2.8 in. x .8 in.), but I had to spit it out and drink half a cup of tea to get the vile taste out of my mouth. It's like chewing on a piece of grass with sugar and a bit of soy sauce seasoned fish. I can't really tell you about the texture because I couldn't bear it for that long, but the smell is like extremely rank and musty clothes.

I can't believe this cost 100 yen ($1.12) for a 15 gram (.5 oz.) box at the local market. I also can't believe this is supposed to be a kid's snack unless parents who don't really care about their kids buy it (that's a joke, incidentally). I say this based on the fact that it was in the candy section with all of the other kid's snacks. The company that makes this, Nakano Bussan, says they've been making this for 70 years. I can't believe they can make a profit with this. This product occupies a position of honor as the worst thing I have ever sampled in Japan. It's going to take a lot to find something more disgusting than this. I wish I had a vomiting sumo rating to give this.

LOL! Well, you're a braver woman than me! Why choose seaweed when you can have chocolate?!

I foolishly believe it was "candy" seaweed. ;-) Still, once committed, I had to try it.

Back in the day (when I was teaching in an eikaiwa), I was told that some parents won't allow their kids true sweets. One of my students said her mother would never allow her to have chocolate or candy of any sort, but she was allowed to snack on dried fish or traditional snacks (excluding bean cakes). She did this because her teeth were poor when she was a child and didn't want her to have sugar.

Kombu is great in onigiri, but I would have a hard time eating it by itself, too. You are very brave!

To me this sounds yummy. Then again, I don't really enjoy chocolate or sweets.

This is one of my favorite kelp products ever. Maybe your reaction wouldn't have been so negative if you had been expecting something closer to the actual flavor. I've noticed that sometimes expectations can influence reactions more then flavors.

Pockywatch: You may be right, but I think it was just the combination of seaweed flavor with sugar that really made this unpalatable for me.

I actually like the taste of kombu by itself. I've had kelp drinks before, for instance. Sugar mixed with it just seems wrong to my taste buds. ;-)

For what it's worth - perhaps to future readers of the comment page?! - stevia is actually a natural sweetener, not artificial. :)

I put one of these randomly in my shopping basket once as well.. I tortured myself through 3-4 strips, then threw the rest in the garbage.

I think kombu and other sea veggies, esp wakame, are very tasty, but that's me.