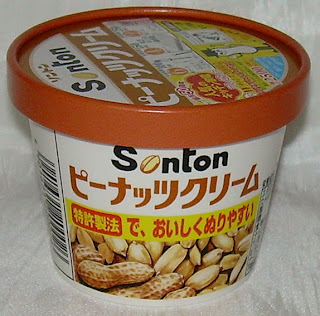 The review of this particular product is offered as a public service. Before I purchased this, I already knew what I was buying and I knew that I would sample it, review it, and never ever eat the rest. The reason this service is necessary is to warn any number of countless unsuspecting foreigners from making the mistake so many of us have made before. That is, they see a carton of peanut cream and figure that this is the Japanese version of "peanut butter." There should be big red warning signs in front of "peanut cream" that flash "NOT PEANUT BUTTER!" 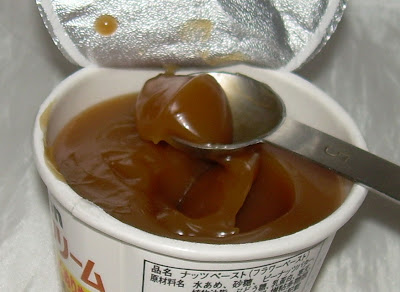 So, that being said, I am pleased to introduce you to a product that puts the lie to the assertion that Americans love everything sweeter than the Japanese do. This is little more than peanut frosting in a bizarre glossy, semi-translucent presentation. The texture isn't creamy, but rather sort of like eerily suspended gelatin which is cold and rather like what you'd expect thick brown mucous (sorry) to be like.

The ingredients list may reveal what is going on with the texture. The first thing it mentions is "peanuts paste" followed in parentheses by "flour paste". The first ingredient is sugar water (probably the equivalent of high fructose corn syrup but made with grapes instead of corn), followed by flour, then peanut butter. This is pretty much peanut butter mixed with a fructose-based syrup and flour. As an ardent fan of peanut butter, I believe they have tampered with perfection to create this abomination.

The texture is really unfortunate because the truth is that this has a fantastic peanut smell and a good peanut flavor. In fact, this could be given a favorable rating if it were not so incredibly cloyingly sweet. You know those over-used dumb jokes about eating something so full of sugar that it gives you diabetes after one bite? This stuff brings those jokes to mind and makes me think, nay, fear, that there may be some truth behind them.

Ultimately, whether or not you're going to like this is a matter of personal taste and experience. Most people who grew up with peanut butter (especially natural types) are going to find this pretty hard to tolerate and anyone who is sensitive to super sweet foods is going to gag on it. This is best applied sparingly to something quite bland. I had it on a bit of a saltine, and it wasn't bad at all, but I'd just as soon have real peanut butter without all of the sugar and textural strangeness.

If you're inclined to buy this, you can find it at most supermarkets for about 180 yen ($2.14). One of the reasons that foreigners may gravitate toward it when they don't know any better is that real peanut butter is generally only available as an expensive import. Small (about 1 cup) jars of Skippy sell for 400-500 yen ($4.76-$5.94), so if you see what looks like a domestic brand for less than half the price, you may be inclined to sample it and be in for a big disappointment.

Incidentally, the maker of this peanut cream, Sonton, offers a variety of other spreads including a chocolate one and some "whip" versions of peanut butter, black sesame and chocolate as well as jams. The whip versions are in clear containers and are mixed with fat. I've had those on rare occasions before and they are actually not so bad because, while they are sweet, they are lighter and have a pleasant texture. If you want to go for a sweet peanut or chocolate spread, I'd recommend the whips over these flour and sugar water types.

As far as "peanut creams" go I think this one is the absolute worst one on the market. In fact, I think almost everything I've tried from this company is awful.

I do love the black sesame spread -it almost makes me forget how much I miss peanut butter when I'm in Japan.

I used to love this stuff sandwiched between two saltines. It was a cookie for me.

My friends love these! But they simply are not peanut butter.

I figured this would be a product many people would have a strong impression of! And, KV, definitely between two saltines is the way to go - it would really help distribute the sweetness better!

I've never seen this before. Is it meant to be spread on something and eaten like peanut butter or could you cook with it?

I believe it is meant to be spread on bread or cake. I think it would degrade into some sort of mutant goo if you cooked with it. ;-)

Interesting. I am in the US, and an online friend from Brazil told me that they were having a peanut cream sandwich, so I looked it up and found your post. I don't know if it was something like this, or a translation difference.