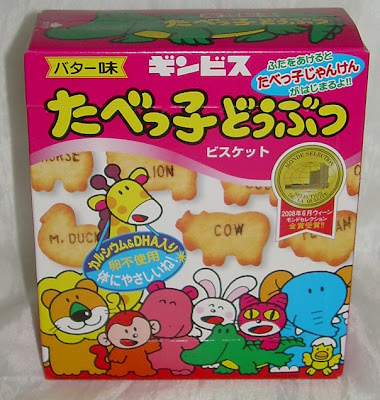 Attentive readers with an impeccable memory may recall that Ginbis is the maker of "asparagus biscuits", which don't actually contain asparagus. According to their web site, this is the company's "long seller" and it has recently been revamped (likely just the packaging). Of course, this is their long selling "biscuit" and the asparagus biscuits are the long-selling "stick biscuits". This is a little like talking about the best "long hairstyle" and best "semi-long hairstyle".

At any rate, this is part of a small collection of kid's cookies that are on offer. In the U.S., we'd call this "animal crackers", but these are actually rather different in composition. They are thinner, crispier, and much, much more flavorful. Like the asparagus biscuits, they are flavored richly with sesame seeds and are slightly greasy. The  main difference is that they don't have the same level of browning and don't carry a certain "over-baked" flavor. They're also rather salty on the outside, which is an interesting choice for crackers designed specifically for children. That being said, the salt really works on these, as do all of the other flavors. 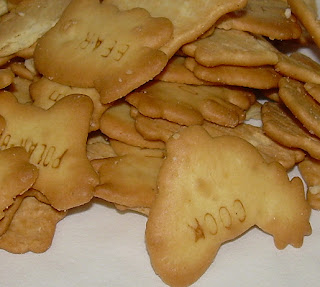 Yes, there are important words to be learned in English.
Note that these are "educational" snacks. Each cookie has the name of the animal it depicts in English and the back of the box has Japanese and English for each animal. It's actually not a bad idea, but I somehow doubt kids are picking up much English from this considering the fact that the shapes are pretty general and don't clearly depict the animals they represent. There are 46 animals named on the back of the box, and I counted 46 crackers in my box. I didn't check, but I wouldn't be surprised if one of each named animal was represented. That would be one of those attentive to details types of things a Japanese manufacturer would do.

I got these with my Peacock Fukubukuro, so I didn't pay for them individually. I've seen them at many supermarkets. This is a fairly big box at 63 grams (2.2 oz.), and I'd guess that it costs around 150 yen ($1.83) given the size, though it could cost closer to 200 yen ($2.43). I calculated each is about 8 calories. The whole box is 344 calories and says that 12 is a serving with 80 calories. Their calculations don't really jive but I think it's not worth sweating whether these are roughly 7 or 8 each.

I really liked these. They were like the version of the asparagus biscuits that I would have liked. These are clearly the same basic formula or dough just pressed, shaped and baked differently and it makes a difference. The flat little crackers have a nicer texture and they aren't too dark. I'd definitely buy these again. They make a great and flavorful tea time snack and you can eat quite a lot of them without overdoing the calories.

The kid in me wants to think that a chicken / rooster named COCK would be a "normally used" word... Here in the states, this would never fly ... Pun intended

I hope you had enough cocks in your bag!

That used to be one of my favorite snacks!!! AHH!! Thank you so much for bringing the memories back to me...I loved licking my fingers after eating them! :D

Heh heh heh Asians come up with the darnest things.

I realize that I am necro-posting, but this was one of the items in the prize pack I won here, and my wife and I devoured these crackers. They were far from the dry animal crackers we have stateside, and definitely much better tasting. The name being stamped on the cracker made it that much more unique.

I would buy this if I were to see them in a store here sometime.