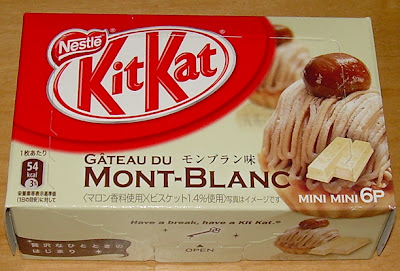 Lately, KitKat offerings have been uninspired yawn-fests. With the exception of the  Tohoku special Zunda KitKat, it's been a steady parade of dark chocolate, white chocolate, and strawberry offerings with the occasional re-issue of a seasonal flavor. If Japanese KitKats were a television show, it'd be a sitcom in which each week the story is basically the same but the characters crack the same types of hackneyed jokes or a boring re-run. The show would be amusing enough on occasion that it'd manage to stay on the air, but generally keep viewers out of a sense of familiarity rather than the show's true entertainment value.

When I saw this box of Mont Blanc KitKats in a Natural Lawson convenience store, I felt like I was seeing the most enticing "preview" that I'd seen in a long time. Though this is not the most creative flavor idea for Japan (there are plenty of mont blanc treats here), it is still novel enough to get this lover of chestnut sweets excited. I forked over my 168 yen ($2.20) and prepared for what I hoped would be a novel experience. 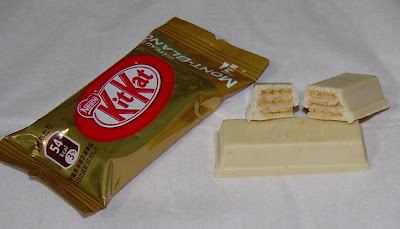 A sniff revealed coffee and caramel notes. This is fairly typical for chestnut sweets because the roasting of nuts often causes a similar aroma to that of roasted coffee beans. The  caramel scent, unfortunately, comes from the artificial flavoring that is used. These have an intense sweetness and the finish is definitely of chestnut, but the first hit really is more like fake caramel. The chestnut element is gotten from powder rather than actual chestnuts.

This is an okay, albeit very sweet KitKat. I wish the depth of flavor were better. This might have been achieved by dialing back the super sweet aspects, but this is a candy bar and a white-chocolate-based one at that. Real mont blanc cakes are sweet as well, but not as overpowering as this. They also have a richness that they get from the fatty filling which is utterly absent in this bar. Though I will finish the box, I wouldn't buy this again.

to be honest i think most of the kit kat varations taste bad and to much fake. btw - in 2 months i will go to japan and i have still problems with sugar and milk (allergy) can you reconmend me some sweets without sugar and milk? that would be very nice.

Conny: Thanks for reading, and I agree with you about the "fake" taste of most of the variants.

Regarding sugar-less and milk-free treats, that's a tall order. There is sugar in a lot of things in Japan, including the cuisine (lots of incidental sugar in this like sukiyaki, stews, etc.), savory snacks like sembei, and traditional sweets. In fact, if I were trying to avoid sugar, I'd be nearly out of luck. There is a sugar-free chocolate called "Zero" which you can buy, but it has milk. Also, it's not especially good or unique.

Most of the sugarless things here are gelatin desserts and a handful of drinks. Unfortunately, the gelatin is not that good or special (fruit flavors mainly) and the drinks are not regularly available (nor that special either for the most part).

Catering to restricted diets is not something food manufacturers do much here. The idea of making something gluten-free, sugar-free, dairy-free, etc. is really not on their radar for the most part. I think people with restrictions are simply expected to not eat any food which may contain restricted contents.

Thanks for reading and commenting!

"If Japanese KitKats were a television show..." For some odd reason, I just liked the way that line began and then continued along.

Some day, I imagine I'll take a very long afternoon and totally immerse myself in your writing. I have a feeling I should go through your posts, alternating by date, moving from 1000 Things to the snack reviews.

As a person who started life out on a restricted diet, I've found Japan curiously both dogmatic and thoughtless around nutrition.

PS
I totally enjoyed your Random Thoughts: Big E's post on the 'other' blog. You inspire. Thank you.

The coffee and caramel notes sounds good but I'm not a big fan of chestnuts.

Will: I think dogmatic is a good word for a lot of things in Japan, and the nutritional aspects seem very "faddish" at times. There were collagen rich foods everywhere for awhile and then those with polyphenols and now low cholesterol is everywhere.

And thanks for speaking so kindly about my 1000 Things post!

thank you for your answer - the main question for me is - what kind of sugar do they use? you can get sugar from diffrent fruits or vegetable. in germany we mostly use sugar beet and sugarcane. do you know which typ of sugar they use in japan? i have no problems with fruit sugar, honey.....

It's absolutely rare for honey to be used at all (because it's very expensive, more so here than elsewhere). Most of the sugar is "grape sugar", but it's also white sugar (processed cane sugar). Sometimes, it's high fructose corn syrup, though rarely as often as it is in the United States.

I hope that helps!