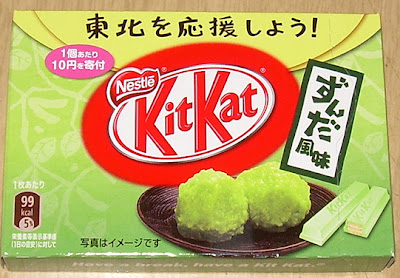 The earliest charity items for victims of the Great Tohoku Earthquake were T-shirts. Other items are sluggishly following at their heels and these KitKats are Nestle Japan's entry. The sale of each bar will add 10 yen (12 cents) to the Japanese Red Cross's coffers. It's a pretty nice gesture, and I'm sure that if these sell well, a tidy sum could be donated. 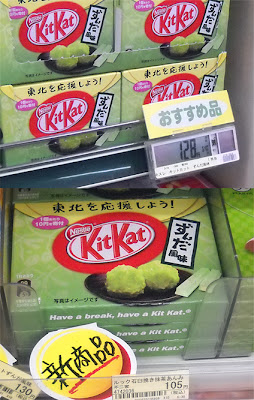 These bars are unusual in their distribution because they are a non-standard flavor of KitKat, but on sale at supermarkets. Usually the "specialty" KitKats are mainly available for a limited time in convenience stores, but there was a huge display of them at my local Inageya supermarket. The odd thing was that they are 128 yen ($1.56) at the market, but only 108 yen ($1.32) at Family Mart convenience stores (click the picture above to load a large version which shows the respective displays with their price differences). I'm guessing that someone at Family Mart decided to go with the standard KitKat price rather than some sort of suggested retail price, but that is pure speculation. I'm rather at a loss to explain it, but clearly you're better off buying these from them.

Zunda is mashed green soy beans (or raw edamame) and this particular cuisine is a specialty of the northern Tohoku area. It makes sense that they'd choose something associated with the region the sales of the bar are meant to help. It's also an interesting choice for a KitKat. In fact, it's probably one of the more curious options that have come along in a long time.

In terms of flavor, this is a white-chocolate-based bar and very sweet. Since the flavor is "green" soybeans, it's no shock that the first bite carries a grassy flavor that gives you that telltale sense that you're munching on something with chlorophyll. The soy bean aspect is very mild and by the end of one finger, you pretty much are eating a sweet white chocolate KitKat with a mild soy and grassy aftertaste. Even my husband, who is not a fan of soy or edamame, didn't find this unpalatable because the taste of the main element was relatively mild.

This is an okay KitKat, and the flavor choice is a pretty enticing one. I wish I could say it was the bee's knees and that everyone should run out and stock up on a load of these before they go away. However, this just isn't that incredible. It's moderately interesting, but rather sweet and mild. If you can pick one up in Japan, I'd say do it to satisfy curiosity, but I wouldn't buy it more expensively from an importer. If you want to help the victims of the tsunami and quake, donate directly to the Japanese Red Cross because it'll probably mean more than 10 yen from the sale of this bar anyway.

Hi I think zunda is the mashed form of Cooked edamame,not raw . I love zunda mochi and make it often during summer time. (^^)

You're right, Jisoo! I said raw because this said "green" (which means unroasted), but this was just a silly assumption on my part!

Thanks for the correction!