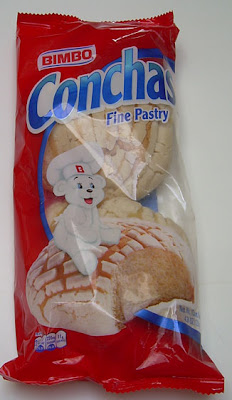 After living on the shores of America for several months, I must say that I flirted with the notion of changing this blog to "international snack reviews". I pondered that possibility for more than one reason. First of all, I wasn't sure of my ability to consistently access Japanese snacks and I was sure of my ability to get my hands on a plethora of food from other countries (especially Mexico at this point). Also, I want to branch out and try different things, especially after quite a few years of focusing on all things Japanese. However, my heart is still very much with Japan and Japanese snacks so I hope that my readers will tolerate my detours to other types of food on occasion while still accepting this blog as "Japanese Snack Reviews".

All of that being said, it was definitely experiences in Japan that brought me to this particular item. Well, there is that and the fact that the product's name smacks of being a euphemism for a harlot's hooters.  I was at a convenience store on San Juan Island and I saw something called "conchas" being sold there which looked a great deal like Japanese melon pan. Since a lot of Japanese baking culture has been influenced by Portugal (and other European countries), I wondered if melon pan was a riff on conchas. I didn't buy the pink-topped monstrosity I saw there, but I found a less scary version with a funnier name later.

For those who don't know, "melon pan" does not taste like melon, but rather is designed to resemble it. It is a bread-like bun covered with a cookie-like outer layer that is poured over the bread dough. The top is then scored to make it look like the rind of a melon. Conchas, similarly, is a bun with a different sort of dough that is scored to look like a conch shell. I've read several recipes for conchas and they seem to be very much the same except that there is division on the side of the Mexican sweet bread about whether or not the shell should be soft or crispy. Some insist it should be soft and others say crispy. Note that, in Japan, melon pan comes with both soft and crispy tops. 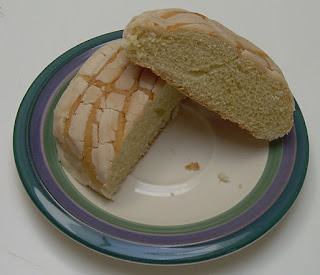 Packaged bread products are never the greatest, especially those that are designed for somewhat long shelf life, but this really wasn't too bad. The coating on top is a little moist and slightly sweet with a nice hint of cinnamon. This may help keep the bread from drying out too much. It has an interesting "doughy" flavor which resembles ever so slightly under-cooked bread. It's an interesting and certainly not unpleasant quality. 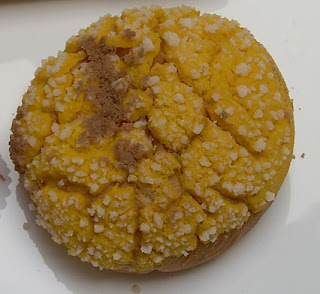 Conchas from a Mexican bakery, or melon pan. Po-tay-to, po-tah-to.

In terms of how closely this resembles Japanese melon pan, it's actually a very similar concept with a different execution. Mainly, the flavor and consistency of the topping is different. The underlying bread is almost dead the same. That being said, I went to a Mexican bakery and bought a conchas there and it was dead-on the same as melon pan with a crispy sugar-crusted top. It wasn't exactly the same as a Japanese melon pan, but it was so close as to not be terribly different. I'm sure that conchas is the well from which melon pan sprung.

As for the Bimbo brand Conchas, it's an okay packaged pastry, but hardly the "fine pastry" that it claims to be. If I were looking for a relatively mild sweet to have with coffee and had nothing more attractive, and by that I mean homemade or freshly baked, I would consider it. Chances are, however, that I wouldn't buy this again. It's not that it's really all that bad. It simply isn't all that good and I'm surrounded by more attractive similarly priced options.

Living in Mexico, so these are a common sight; surprising for the page to load and see a picture of them! I, for one, welcome reviews of any product from another country, especially since you've amassed so many Japanese snack reviews in the archives.

Bimbo makes conchas with a chocolate sugar topping which I seem to remember liking more than the plain one, though to be honest I don't think I've had one for years.

Glad you were able to try conchas; I will have to keep my eyes out for melon pan so I can do a comparison. Having the mind of a 10 year old I always chuckle to myself when I see Bimbo, even though it is pronounced Beembo. I would assume in Japan they would pronounce as beembo too.

Andrea: I haven't seen the chocolate ones, but they sound interesting.

Matt T.: I know. I took Spanish in junior high school and college (and was very good at it), but just as we can chuckle at Japanese which is pronounced differently in English and therefore it makes it funny (rather than pronounce it the Japanese way), we can do the same with other languages.

Susie: Definitely try melon pan if you find it, though there is a lot of variability in melon pan!