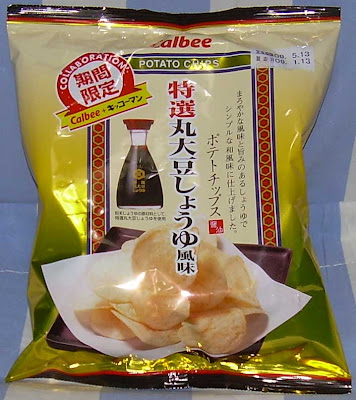 When I reviewed the yuzu soy sauce chips, the great and powerful Marvo from The Impulsive Buy wondered in the comments about soy sauce flavored chips and if they were black. His wish was my command, but only this once. Frankly, I'm a little frightened of what his other wishes might be. If you read his reviews (and you should), you'll understand that that fear is well founded.

Calbee is one of the best known makers of chips in Japan and Kikkoman is known around the world for its soy sauce. Brand name awareness being what it is in Japan, their collaboration is written on the front as if it were a pairing worthy of much rejoicing. I did a little digging around to get some more information about Calbee. The "Cal" refers to calcium and the "bee" to vitamin B1. I'm not sure what chip production has to do with these nutrients, but I'm guessing that at least some of their products are fortified with them. The company was established in 1949 and started out in Hiroshima, but moved its headquarters to Tokyo about 14 years ago. I've been told that companies having a Tokyo address, particularly in one of the major business districts, carries more prestige. 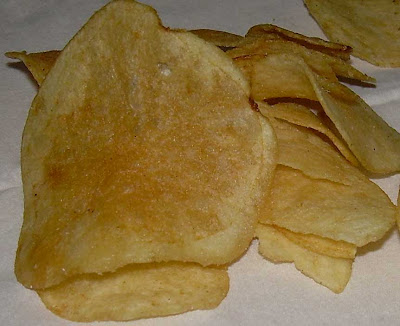 I can now say with certainty that soy sauce chips are not black. In fact, they look and smell very much like plain potato chips. There aren't even any discernible flavoring specs on them. In fact, the soy sauce component in the chips is so faint as to nearly be undetectable. If you cram a few in your mouth at once (not recommended), you get a better sense of the soy sauce flavor, but it's very subdued.

Don't get me wrong, these are very good chips. They are thin, super crispy, and not too oily. Calbee has always made great basic chips, but making these soy sauce flavored with so little soy sauce flavor seems pointless. Perhaps the flavor is so weak because they wanted to push the whole "simple" flavor concept that is mentioned on the bag. These chips will be on sale until early June and I'd recommend interested parties grab them while they can, but you'd probably be just as happy with regular chips and they (plain chips, that is) are not going anywhere.
Posted by Orchid64 at 5:00 AM

I love calbee!! They make a range of great potato chips. Yasu loves calbee kappa ebi sen, his favourite of all time.

I'd love to try these if only for the gimmicky side of things, just to say i've had them.

I think part of the reason they were so subdued may have been that they weren't very salty, but it was hard to say for sure. Salt carries flavor, but they may have been worried that a soy sauce flavored chip would be too salty with the same amount of salt as a regular chip.

I order you to find a giant peacock feather so that I may use it as a quill.

I think of you more as a gentle reviewing despot with peculiar perversions that I would fear catering to.