Drinking beer is a serious past-time in Japan. Given the emphasis on emotional control in the culture, it is seen as a lubricant for expression and saying or doing something which is normally scandalous while inebriated is often forgiven. The notion of alcoholism as a disease that society needs to deal with and treat is rarely present in Japan. Drinking beer is just what people do to relax and nearly every adult does it to some extent or another.

As someone who has never liked alcohol and in fact has never had more than a sip of it, I'm seen as some sort of peculiar sort of being. Of course, being red-haired and blue-eyed pretty much makes me weird anyway, but Japanese people cannot quite see why I wouldn't find alcohol attractive. I don't need alcohol to help me open my big mouth and offer up my feelings. I can do it quite well without any external substances.

And, no, I'm not religious. I don't have some sort of objection to other people drinking or enjoying themselves. My main problem is that I hate the smell of alcohol. Every time the notion of sipping a bit of wine or beer when my husband infrequently partakes crosses my mind, one whiff will put the thought right out of my head. It may not surprise you to learn that I did not buy these caramels. My husband purchased them out of curiosity.

These caramels are offered by a company Merushi-ML1 (メルシーML1) which appears to be the marketing arm of a company named JOD Co, Ltd. In my research, I couldn't find out much about them except an URL for their on-line shop and the fact that they are a small company located in Aichi prefecture with only 300 employees and they sell a vast range of products including clothing, kitchenware, bedding, cosmetics and assorted foods. I couldn't locate these beer caramels on their web site, but searching it for a particular product is like hunting for a needle in a haystack. 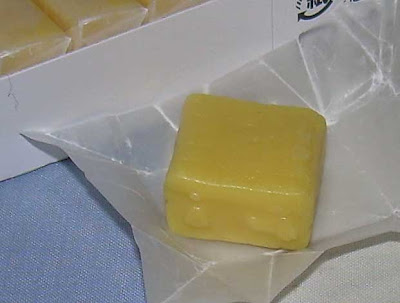 There are 18 caramels in the box. Each is firm, but easy to bite into and chew. The color is pale gold and you can see it representing a candy form of beer by color alone. The ingredients are starch syrup, sugar, sweetened condensed milk, vegetable oil, beer (draft beer Sapporo Black Label), flour, vegetable protein, salt, sorbitol, flavoring, safflower coloring and and a soy emulsifier. A note on the box states that the candy is .1% alcohol.

Given my feeling toward alcohol, I figured it'd be a good idea to both include my impression and my husband's. Note that I have, on occasion, included beer in cooking, so I know the general taste if it is diluted and the alcohol has been cooked out of it.

My husband:
He said they didn't smell like anything in particular to him and that they tasted like weak butterscotch to him. He said that he couldn't detect any beer flavor in them. After getting his impression, I knew I had no choice but to subject myself to them as well since he clearly has a weaker sensitivity to alcohol smells and tastes than I.

Me: They smelled vaguely of the yeasty smell of beer. The taste was like like beer that had gone very stale and had been mixed with sugar. There was something about the level of sweetness mixed with the beer flavor that made it really awful (as opposed to just plain bad). I could taste the beer very well, and it did nothing to endear me to the idea of becoming a beer drinker in the future.

I found a Japanese review of these and the person indicated that anyone who for some reason wanted to give up beer might want to enjoy these as a substitute. Given the total acceptance and saturation of alcohol consumption in Japan, I can't imagine a Japanese person (short of one with serious liver issues) choosing to abandon beer. However, even if you did want to give it up, I have to imagine this is a poor substitute. Either the taste isn't potent enough for beer drinkers (as was my husband's impression), or it's a poor approximation (as was my impression).
Posted by Orchid64 at 5:00 AM

I had the chance to order these, but decided against it because they just didn't sound good. I even like beer, but something about these looked off-putting.

You definitely made the right decision!

Have you tried the Genghis khan caramel from hokkaido? That is sooo yummy. I made my MIL try it and she hated it and so did Yasu, funny coz they all are from hokkaido anyway, but i loved the taste, and now i've order the curry caramel. I love the taste of the caramel like real meat. I guess that's what put Yasu off.
We tried the sapporo draft beer caramels too but they weren't as special as the genghis khan ones.

I was like that with beer all through 6 years of college, just could not get into it. Then, I started working and began to like it more. Something about the peer pressure in a work environment maybe. I know it's a bigger thing to go drinking with co-workers and the boss in Japan than it is here, but still I think it worked on me.

Have you had beer flavored potato chips? I actually like those, they're usually beer and cheese flavored.

I'm not a beer drinker either but i do like the beer batter on fish, or beer batter chips, that gives a whole new dimension to beer flavoured ingredients!

Now you can get beer shampoo apparently!

Kelly: I haven't seen those around here (and haven't been to Hokkaido), but I'd probably give them a try. I think sometimes the texture/taste combination can be very off-putting - meat flavored chews even if hey taste good are just plain weird.

Bryan: Peer pressure just doesn't do anything for me. People tried to get me to drink on various occasions throughout my life and I just didn't care. One whiff is all it took to turn me off.

Anonymous: f I cook with alcohol, that's fine. I could deal with beer flavor in cooking because it's not as strong (and the alcohol evaporates).

Don Quixote: I think beer shampoo has been around for ages. I remember it in the U.S. in the 70's when I was a kid. Beer is supposed to be good for hair, but I'm not sure why!

Thanks to everyone for their comments! (and for reading)

This is very interesting, I've never tasted one or even seen one before. If I got the chance, I'd definitely try this one out. Kelly@ blooming tea