Despite having been in Japan for 20 years, I have never purchased a Meiji plain chocolate bar. There's something about the packaging that never drew me. It could be that it looks a bit like a rip-off of classic Hershey's chocolate bar packaging with the mixture of a dark brown wrapper with a metallic logo, or simply the fact that the wrapper is so ill-fitting. In fact, the paper wrapper seems like it's sloppily too big for the foil-wrapped bar.

I researched the Meiji plain chocolate bar's history on Meiji's site in order to see if the design was perhaps, er, "inspired" by the Hershey packaging. This bar was introduced in 1926 with a deep brick red wrapper and with a similar design as the current bar. That is, it had a similar ornamental border and big text in the center. From there, the wrapper got redder and redder until 1971 when it suddenly became the dark brown number you see pictured above. My guess is that the package change had more to do with the fact that Ghana was introduced by Lotte in 1963 with a red wrapper and Meiji wanted to more clearly distinguish their plain chocolate bar from Lotte's and the change had nothing to do with Hershey's design.

I was inspired to sample this bar because one of my commenters mentioned in her comments on the Ghana holiday bar that she found that the Meiji bar had a bitter aftertaste, so I wanted to sample it for myself to see what it was like. Also, this is a basic bar that has been around for a very long time and is probably a staple of the Japanese candy market so being familiar with it would seem to be a prerequisite for evaluating other products. 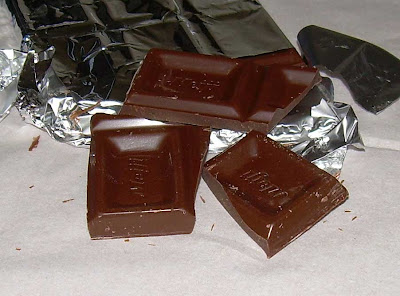 The bar is 2.29 oz./65 grams and has 15 segments with the word "Meiji" imprinted on each. The whole bar has 363 calories so each square is 24 calories. This is not too dissimilar from the "cost" of most milk chocolate calorie-wise, but this bar is about .7 oz./20 grams bigger than a standard Hershey bar.

The bar smells a lot like sweet cocoa powder. As you can see by the picture, it does not cleave evenly along the imprinted lines. It is soft and has little snap, yet bits fragment off of it when you break off squares. It's probably the sloppiest chocolate bar I've ever had in Japan. The chocolate is cool and sweet on the tongue and ever so slightly bitter. The chocolate is fairly intense and not all that milky. It's good, but like Ghana, it is pretty strong and not so milky. I think this somewhat bittersweet taste is the result of the cocoa beans being roasted differently in Japan.

The first 2 squares came across as mainly sweet and cocoa-intense. The third started to reveal more of a bitter and acidic aftertaste. It leaves the chocolate equivalent of "coffee breath" in your mouth. It's an aftertaste which makes you want to drink something or brush your teeth. It's not awful or anything, but it's persistent. I intentionally did not eat or drink anything else to see how long it lingered and it seemed to stick around for at least a half hour.

This bar tastes pretty good on the whole, but I don't think I'd want to eat it if I didn't have a drink on hand or didn't expect to have a different snack around afterward. It definitely isn't the sort of thing which you'll want to eat and eat and eat since the aftertaste aspect builds up the more you eat. I don't think I'll buy a Meiji plain bar again, but I'll almost certainly eventually finish eating the rest of this one.

I've always seen it around and wondered what it tastes like. It looks a little too dark for my liking though.

I've wanted to try the white for some time but I'm scared that it will be throat hurtingly sweet.

At least by reading your review I've saved myself $3 and some disappointment.

If I paid $3 for this and then found out it was as unimpressive as it is, I'd be pretty unhappy. Paying about $1 for it didn't seem so bad!

Thank you for reviewing this and your opinion on it. I was wondering if you would. As I mentioned before, I hate these Meiji bars. Some of the other Meiji chocolate products I find to be tolerable or even almost good, but this plain chocolate bar is absolutely nasty in my opinion.
The bitterness of it hits me from the first bite.

I never thought about it, but funny you should mention coffee and coffee mouth, as I hate coffee and all coffee flavored items. Maybe this is why I find this chocolate bar so awful.

I can easily see how you'd hate this. The aftertaste really is quite persistent and certainly does build up. It was probably more palatable to me because I ate relatively small amounts, and I like coffee.

I wonder if one of the reasons that the beans are roasted so darkly is that the Japanese like coffee (almost universally) and particularly acidic and bitter blends. The chocolate tastes may reflect their overall preferences in this regard, but that's pure speculation.

Thanks for mentioning it in the comments so I thought about reviewing it! :-)

Try Hi Milk Chocolate by the same company. The taste is quite good.

Your review sounds like some sort of wine connoisseur review. Hilarious!

The new Meiji logo and packaging are great. The "Rich" series of white chocolate is back, but unfortunately the pistachio has been replaced by matcha. The pistachio was like a gourmet peanut butter cup in a bar.

I like both, but second the recommendation for the Meiji Hi-Milk (red wrapper) if you're not wild about the standard - it has a similar basic flavor but is less intense.