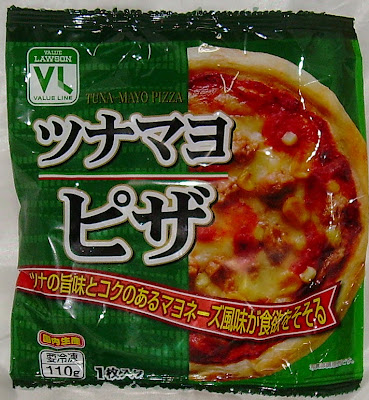 There's an excellent blog called "Heat Eat Review" which features frozen and ready to eat food reviews. I've often thought that such an idea would be interesting for Japanese frozen or prepared meals, but the truth is that there isn't much of such types of food around relative to the U.S. The fact that women tend to cook most of the time and housewives are still pretty common means people tend to get full and balanced meals rather than grab something quick. Also, the types of food that are available in this area tend to be expensive and of very poor quality. It'd require one to eat an entire meal of junk instead of just the snack size things that I review.

As I mentioned in a former review of a prepared ham and cheese bagel, I rarely buy prepared food, frozen or otherwise. The only time I tend to buy it is when I'm not feeling well and feel too tired or sick to cook. The night before I bought the Lawson's Value Line frozen pizza that I only slept about 4 hours, so I was ripe for an easy meal when I hit the local convenience store for milk. I found this pizza, along with a similar one called a "mix pizza" and decided to give it a go. 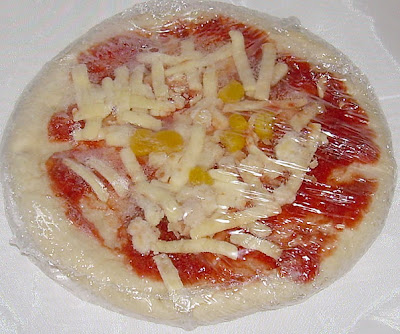 The pizza cost 100 yen (about a dollar) and is 14 cm (5.5 in.) in size. The entire pizza has 249 calories, which is what puts it into the "snack" range and not a meal. It comes in a plastic shrink-wrapped package inside of it's main plastic package. I guess they feel it needs the extra wrapping for freezer burn protection. The instructions on the package recommend that you cook this in the toaster oven for 5-6 minutes at 1000 watts, but I found that was not long enough for the cheese to melt or the crust to get a bit brown. 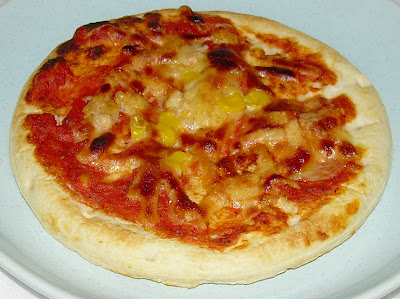 After cooking, the pizza smells odd. It has a bit of a tomato smell, but also a strange nondescript fishy smell which I associate with Japanese food. I'm guessing that smell would be the tuna. While the crust is your standard preformed crust, it actually has a little better texture than average. The outsides is slightly crispy and the inside is nicely chewy. The sauce is inoffensive, but not very flavorful. In fact, the main problem is that aside from the crust and the tomato sauce, there's very little flavor at all. The tuna is more of an aftertaste than an actual topping. The cheese is so sparse as to be undetectable as is the corn. 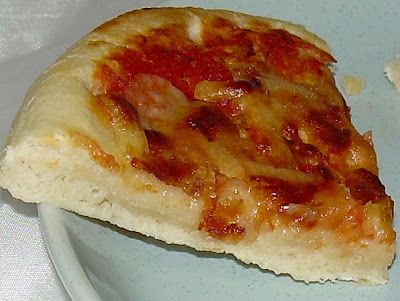 I should note that I had very low expectations of this given that it's very small and cheap, and frozen pizza in Japan is abysmal on the whole. The crust exceeded my expectations, but the toppings were about usual for a Japanese frozen pizza. This makes for a pretty nice "bread" if you manage to cook it just right in the oven. It really isn't much as pizza though. If you'd like a soft, warm pizza-flavored bread to go along with a salad or as a snack at tea time, this wouldn't be a bad choice. I'd say this is fine as long as you're in the mood for that and nothing more.

The thought of heated tuna and mayo alone--two of my most hated foods *ever*--was enough to make my stomach do flip-flops! But apparently you don't taste either very much here.

It looks like a Lunchables pizza. Did you ever try those when you lived in the US? If not, you're not missing anything.

CrackerLilo: I actually like tuna and mayo, but, as you noticed, it's not like it was much of an issue on this pizza. ;-)

ebidebby: I think that when I was in the U.S., there were Lunchables, but they were confined to slips of meat and cheese and not yet "pizza". The picture you linked to looked like it still had more topping on it than the one I bought!

Marvo: An indication of how my standards have changed from living in Japan is that neither the tuna nor the mayo gives me pause (though they once did). The corn, on the other hand, is still a bit of a sticking point for me. ;-)

Thanks to all for their comments! I feel encouraged to include more of this sort of thing in reviews from now on! That is, more frozen items, not more tuna mayo pizza. ;-)

Shows how long I have been here. I love tuna mayo pizza. It has become my favorite, but I will pass on the corn thrown onto everything.

I honestly have to say that I had no issue with mayo, corn, and tuna on pizza. I even ate seaweed etc. But then again I eat anything. But it did taste good, and Lawson has some awesome bentou lunches and other stuff I totally would go back to eat again, even the noodle stuffed buns. But to each his own.

Incidentally, though this is a Lawson's Value Line product, it wasn't purchased at Lawson's. It was bought at QQ. Our local Lawson's shut down about a year and a half ago. QQ is more of a 99 yen grocery store cross-bred with a convenience store.