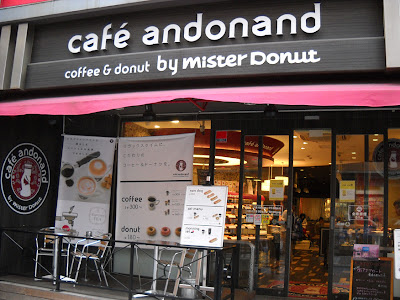 My friend Shawn, who is both witty and waggish, said of the name of Mister Donut's cafe experiment called "andonand" that there seem to be quite a few more "ands" in there than necessary. It is a silly name and I actually encountered it before the Mister Donut franchise annexed itself to the name. The chain "andonand" had a shop in Shibuya at one point but it disappeared. Apparently, it is being resurrected by Mister Donut. 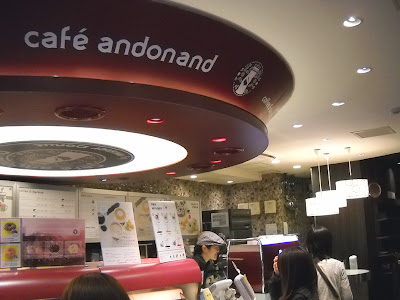 Mister Donut is the biggest donut chain in Japan because they know how to craft a donut for the Japanese market. They are smaller, fattier, and less sweet than donuts at places like Krispy Kreme and lighter than the dense offerings at places like New York Donut (a franchise which has kiosks in major train stations in Tokyo). They're also great at incorporating traditional Japanese flavors such as kinako (toasted soy flour), green tea, "black" sugar, and sesame into their baked treats. While researching for a review of new donuts on offer by the venerable "Misdo", I clicked over to their "andonand" link. The concept is to provide superior service and a more refined eating experience in the shop including metal utensils and ceramic dishes, but mainly to reduce waste by avoiding disposable wrapping. Their tag line is "sweet smile and heartfelt service". While I was on the site, I couldn't help but note that there were some very appealing flavors on offer that were very different from Mister Donut's varieties. At the time of this post (and I'm sure they'll change through time), they included lemon tea, caramel custard, orange caramel, maple almond, espresso affogado, and cassis and cheese. I also noted that the donuts are significantly more expensive with prices ranging from 180 yen ($2.21) for the cheapest to 250 yen ($3.07) for the mid-range to 430 yen ($5.29) for the most expensive. Most of the common Mister Donuts are 100-180 yen in price making these a premium price by comparison. 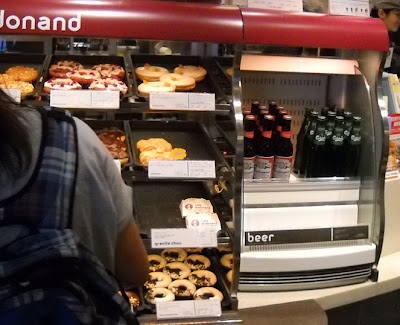 There are currently no branches of this franchise in Tokyo, but my husband and I stumbled across one during a trip to Yokohama and couldn't resist taking advantage of the opportunity. The staff were very friendly so they lived up to their motto in that regard. As part of the more upscale experience, they pack your purchase in a Krispy-Kreme-style flat box rather than in the type at Mister Donut (which places donuts in a paper bag or vertically in a long box) We were also very surprised to see beer for sale in a donut shop. This sets this apart from standard Mister Donut, which markets a lot of kiddy toys that can be acquired through fukubako or point cards, and is clearly a family place as well as a one-stop-shop for coffee and donuts for everyone. While I think it's all well and good to target adults, I can't imagine pairing beer with donuts, but then I don't drink alcohol of any kind. 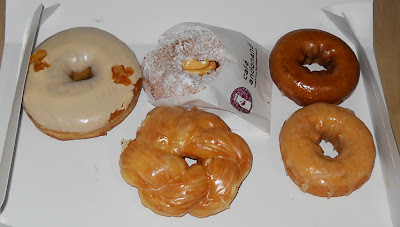 top from left and clockwise: orange caramel, caramel custard, lemon tea, maple, honey twist
My husband is the donut aficionado so he selected more than me, but I split a caramel custard with him and had a lemon tea one for myself. The caramel custard one was sublimely good. The filling was rich, creamy and deliciously flavored with a good caramel (possibly even real) flavor that wasn't overwhelming. The lemon tea was a cake-style donut with excellent texture, and the flavor on the modest but adequate glaze was nice, but not as well balanced as I  might have liked. I think it could have used a little less tea or possibly less lemon. There was too much of both for me. I didn't eat the others, but my husband said they were very good, too.

The question is whether or not these are worth the premium price compared to the more easily available and cheaper donuts you can locate at Mister Donut's regular shops. My answer is, yes. They're really good and if you want something a little special and well-made (and you're in Japan and have access to these shops), I'd say go for one, especially the caramel custard. And if you have a donut with beer, tell me how that goes for you. ;-)
Posted by Orchid64 at 12:00 AM

I looked at the website and they all look so delicious and different! I wish we had a donut café like this out here! I'd totally go for it instead of Tim Horton's.

I would completely be done in by this shop...LOL! BTW, how was the orange caramel? That would have been my first selection, then the honey twist. Thank you for this wonderful post!

I've heard that Tim Horton's is very good, though I have to imagine that these would be pretty hard to beat!

You can't tease me with one of these on a Saturday am! I wonder if they will come to Central Japan, from your description, they sound uber delicious.

I love Tim Hortons coffee, but in my opinion, the donuts leave something to be desired. Probably because they're baked, not fried. I feel like the best donuts are usually from small shops or even grocery-store bakeries.

I tried both Mister Donut and New York Donut when I was in Japan, and predictably liked the latter much better.

Dani: I actually didn't taste the orange caramel since it was my husband's selection. I should have taken a nibble, but he had it the next day for breakfast and I didn't think to ask, sadly!

Thanks for reading and for commenting!

Mister donuts is so delicious, and cafe andonand even more so!
Also, there is one right in central Tokyo :) It's near Kamiyacho Station on the Hibiya line.

Thanks, Meow! That's good to know.