Green Tea Coke Plus with Catechin

You'd think that living in Japan would mean I'd be right on top of every new release, but the truth is that one would have to make it a priority to stroll through every aisle of a convenience store on a daily basis to see new items or keep an eye on the news of new releases in Japan. I'm too busy for the former and too lazy for the latter. The truth is that I was completely unaware of this new green tea Coke until Marvo at The Impulsive Buy brought it to my attention. It's because of him that I sauntered down to the local Family Mart and bought three bottles (one for me, two for him) and that you're seeing this review in such a timely fashion.

I didn't realize it when I first looked at this, but this Coke is meant to appeal to the type of people who will buy junk food that has been "enhanced" to make it healthier. It's "Coke Plus" for starters, not "Diet Coke" or "Coke Zero". Coke Plus is the ugly stepchild to the other calorie-free Cokes. It has vitamins or minerals or some such crap added to it such that it has a weird aftertaste. I tried Coke Plus once, and decided that I'd never allow it to darken the doorway to my taste buds again.

The "catechin" is supposed to be the "plus" in this whereas the "plus" in the more commonly available Coke Plus is Vitamin C. Catechin is supposed to reduce your chances of developing cancer or hardened arteries. I'm guessing that you'd be lucky if the catechin in a bottle of this canceled out your chances of developing cancer from the artificial sweeteners in it. 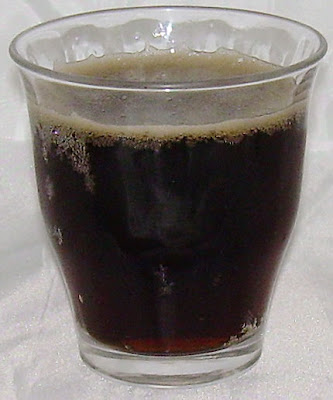 The first ingredient in this is green tea extract followed by caramel flavor and then another type of green tea acidulant flavoring (which adds a sharpness to the flavor). Other ingredients include both of the artificial sweeteners aspartame and Sucralose. You'd expect it to be bursting at the seams with green tea taste given the ingredients list, but taking a whiff of it doesn't really reveal much except an off-brand cola smell. The first several sips also didn't overwhelm me with tea flavor, but as I drank more, there was more and more of a sense of the grassy flavor that comes along with green tea. Halfway through the bottle, it became increasingly more pronounced. It's as if I had to build up a sensitivity to the flavor to detect it more clearly.

The sense I got from this is that it carries the basic flavor of green tea, but without any trace of its trademark bitterness. This gives it a strange flavor which seems reminiscent of Stevia. It's like a grassy, malt flavor. I'm not sure that a green tea aficionado would recognize what this is as actual green tea taste, but I'm pretty sure a Coca-Cola fan would recognize that something was not quite right with it.

This certainly was not bad at all. If I were in the market for a calorie-free Cola and couldn't buy regular Diet Coke or Coke Zero, I'd buy this without fear that I would find it unpalatable. I'd take this over the Coke Plus with Vitamin C for certain. However, I don't see this as particularly special or appealing and it'd definitely be second to a regular plain old Diet Coke. Unlike Pepsi's weird flavors, Coke seems to be attempting to make something more subtle and palatable.

Note that there is currently a contest going on with all Coca-Cola beverages where numbers in the cap can be used to win J-League (Japan Soccer League) shirts and other bits of flotsam if you're inclined to fill your life with useless possessions. You have to go to the contest web site and enter your numbers and manage in Japanese, and you have to care enough to bother.

This is also reviewed at the Impulsive Buy.

Yeah I saw this on Jlist last week and I was thinking if I should buy one or not, for a taste.

Thanks, you've just saved me a bunch of money. After your review I think I'll pass.

I really hate the soft drinks with sweeteners in, so I'd probably hate this too.

How much did you pay for it in Japan?

In Japan, these cost 147 yen at convenience stores. That is the most expensive it tends to be, though you can sometimes find places where they cost as much as 160 yen.

The shipping from Japan for this sort of thing is monumentally expensive though, so $8 doesn't seem bad at all. If you look at the Japan Post numbers, 500 grams (about the weight of a bottle without the added weight of packing) is 960 yen for airmail. That makes $8 quite cheap.

Thank you very much for picking up those bottles for me!

I look forward to wrapping my lips around the bottles you send me and then writing a review that will probably involve naughty body parts and/or Japanese anime references.

I took the box to the post office not 30 minutes ago and hit a snag. They refused to send it. I'm going to try again at a different post office. I'll have a full scale rant on at some point in the near future. I'm soooo frustrated.

Interesting! I wonder if it will still be available in July when I am in Japan.

Thought you might like to know that Sarah Jessica Parker is the face of this particular coke.

I wonder if more people will buy it because of her? I'm not swayed by actors selling coke.

When I was researching this, I was exposed to the sheer horror of Sarah Jessica Parker's massively Photoshopped face on Coke's site. I figured I would spare others having to scrub their eyeballs.

I don't know what she really looks like, but every time I see a picture of her, it looks like her make-up has been applied with a spade and she resembles a drag queen.

Yeah she sure does look like a drag queen. Interesting to see they call her as Sarah J. Parker. In Australia it's Sarah Jessica Parker.

thanks your information,
i think green tea is best combine to be usual unique food like ice cream or cake which can easily eat by us