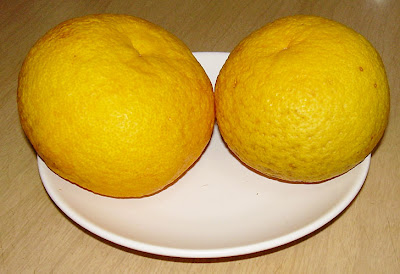 One of my students gave me three of these ugly customers from a tree in her yard. She told me that she had copious amounts of them and that I could have more if I liked them. They were called "summer oranges" or "natsu mikan". Apparently, this type of fruit is very popular for people to plant in the gardens they plant at their residences.

I must say that these smell really great. Like the golden oranges that I reviewed previously, they don't have a distinctive smell, but rather a mixed citrus smell. I could pick out an orange, lemon or grapefruit by their distinctive scents, but I couldn't easily identify one of these. Each orange is about the size of a small grapefruit or a large orange. The color is that of a dirty lemon with a few orange areas. 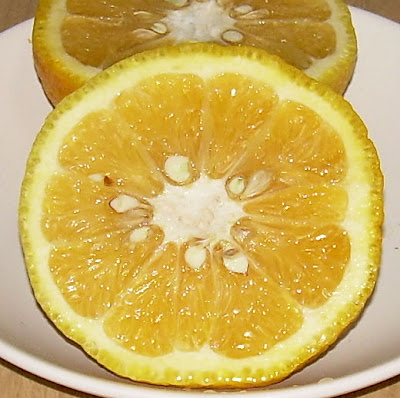 When I asked my student to describe the taste, she said they were very sour and advised me to cut it in half and either pack the top with sugar or honey and leave it on a counter or in the refrigerator overnight to allow it to absorb the sugar. I mentioned that this sounded a lot like a grapefruit and she said that these were more bitter and sour than grapefruit. While I do like the flavor of grapefruit in jelly sweets or citrus blends, I don't like to eat real grapefruit.

This did not bode well for the likes of me because I don't take well to bitter flavors. Some people can develop a taste for them, and heaven knows I've tried, but my sense of taste in regard to bitter things is extremely acute. In general, most people can't tolerate bitter flavors because a lot of bitter plants are poisonous. Hating them is something which has helped our species survive just as loving sweet things has done so (and made us all a bit curvier).

I did as my student recommended and packed the top of one half with sugar and left it in the refrigerator overnight. The next day, I dug into a section with a spoon. Suffice it to say, I didn't take to it at all. It was okay where the sugar was absolutely packed on, but even the areas which were moderately saturated with sweetness weren't enough to make this palatable. One bite and I had to toss it away.

I think people who eat a morning bit of grapefruit might enjoy this, though even they might be hard-pressed to eat it regularly. My student told me a lot of people like to use these to make things like marmalade, but I'm not a fan of that either. At best, I'm thinking these could be made into some sort of potpourri or scented oil, but I can't recommend buying them or even much more than sampling them if you get one for free.

So she knows these things are really sour and require extra time and work to taste decent. Huh. It's almost like a bizarro bribe.

Maybe if you leave the fruit at room temperature, it will turn sweeter. My oranges always turn sweeter if I leave it out for a bit before putting them in the fridge. But if sour is the nature of the fruit, then a little sugar is the way to go. Maybe juice it along with some other naturally sweet fruits.

You were unlucky with your student or the particular natsu mikan, or both. I tried it yesterday and loved it. The taste of our natsu mikan is actually milder than grapefruit, with an almost-undetectable shade of bitterness and no sourness. And you definitely don't need to put any sugar or honey on them -they are sweet enough! Give them a second chance, from a different tree and perhaps even a different part of Japan.

You were unlucky with the particular natsu mikan or the particular student, or both. Our natsu mikan taste actually milder than grapefruit, with an almost-undetectable shade of bitterness and no sourness. And you definitely don't need to put any sugar on them! Give them a second chance, from a different tree or even a different part of Japan.