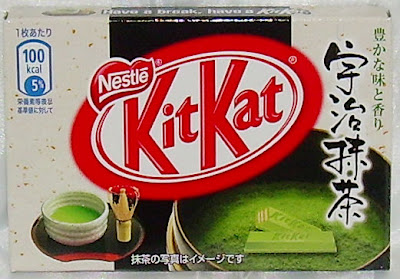 When I write corrections for my students, I have to be careful to print because most of them can't understand cursive writing. When I tried to read the right side of this KitKat box, I had a thorough understanding of how they felt. Reading stylized kanji is really a pain for the likes of me. Similarly, Japanese handwriting can be quite hard to read as well.

To be honest, to find out what kind of green tea this was supposed to be, I had to read the ingredients on the back which were printed in a relatively plain Japanese font that was easy for my dumb, non-Japanese brain to process. For those who don't know, there is a wide variety of green tea to be had and I'm not well-versed in any of it. The ingredients list says that this is flavored with matcha (rubbed green tea) powder. I think matcha is one of the types of tea that I've actually sampled in Japan, but the truth is that I'm not a big drinker of green tea. I don't mind it. If someone serves me some, I'll drink it without hesitation. It's just not something that I'm over the moon about. 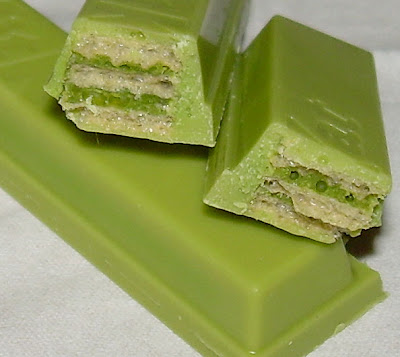 I'm not sure how this measures up to what real green tea should taste like, but I can say that I enjoyed it even as a non-drinker of the liquid variety. The first bite carries a bit of a roasted green tea flavor, followed by a rather intense sweetness then a familiar bitterness. Normally, I'm not a fan of super sweet KitKats, but the pairing of the green tea with it is a pleasant mixture. If I were in just the right mood, I'd surely have this again, if for no other reason than the grassy color is rather appealing. It makes me feel like my KitKat has been made from fresh lawn clippings (which always smell great and remind me of growing up in Pennsylvania rather than the concrete jungle I currently live in).

Note that this appears to be a reissue or a repackaging of a previous release of the green tea KitKat. I don't know if the flavor has changed, but I've seen some old pictures of the previous version and some reviews of it on other blogs and the pictures and descriptions of the bars appear to be identical. The same graphic is also used on the box for the illustration of the fingers. Chances are that this is exactly the same matcha KitKat as before.

The previous versions have been reviewed in many places, but here are the ones I found in my searches: Candy Blog, The Japanese Snack Food Review, Impulsive Buy, and Snack Love.

Matcha is one of my favorite flavors for chocolate, so the matcha KitKat is always one of my favorites. I do find it to be a fairly authentic representation of sweetened matcha powder. They do seem to keep repackaging it and releasing it again, but I'm not going to complain.

Thanks for the review on the Green Tea KitKit. I heard that flavored KitKats are causing quite a storm in Japan. I wonder if they'll ever release anything like these in the States...

The side reads "Uji Matcha" - two words I can recognize instantly now that I've lived in Uji for a couple of months, just because they're everywhere. So this is not just your regular old matcha, it's match supposedly grown in Uji, the matcha capital of Japan.

Thanks for the information, Oren. I appreciate it!

I had the Matcha ones once long ago and thought they were great - I don't think they had them in the J markets here in Calif, someone sent it to us. That would be cool if they'd start stocking the green tea one at Marukai.

I've tried this before and it pairs up amazingly well with usucha. I wish there were matcha flavored M&Ms!

It is really unfortunate that despite being a self-declared green tea lover, I have never tasted of this product before!

It tastes great! I loved it! :D
I'm not a green tea drinker as well, and I was shocked when I found this. But you know what, it's great! :D