My husband and I were perusing a discount snack shop and they had a sign up that said that the next KitKat flavor to be released on June 16, 2009 will be "ramune" flavor. Ramune is a Japanese "soda" flavor which has a distinctive bottle that has a marble in it. It comes in different flavors but was originally a lemon-lime flavor mix, but there are actually a variety of flavors which are sold as ramune.

When I first came to Japan, I thought of ramune as "weird blue" flavor since it seemed a lot of the "soda" flavor candies and drinks were blue. It's not a bad flavor, but it's not really that great either. My guess is that most of the ramune that I've sampled is artificially flavored and therefore not the best quality.

The interesting thing is that, like many "Japanese" foods, ramune is actually something brought to Japan by a European person. In this case, a Scotsmen. One thing that sometimes irks me is that I'll see people talking about recipes for "Japanese bread" or "Japanese cheesecake" or whatnot. Prior to various Europeans introducing certain types of food culture, Japan didn't have a culture which included traditional baking with wheat (or almond) flour. There really is no such thing as "Japanese bread" or "Japanese cake" which is put in an oven and baked. There are only European recipes which are popular in Japan.

At any rate, ramune is actually a phonetic approximation of "lemonade". Le = Ra (ラ), Mo = Mu (ム), Nade = Ne (ネ). This may not make sense just looking at the spelling, but keep in mind that Japanese uses phonetic characters which, for the most part, are consonant vowel pairs and not single letters and "lemonade" doesn't use a "lee" sound, but a "lay". There are some sounds in English that the Japanese can't reproduce because they don't exist in their language. 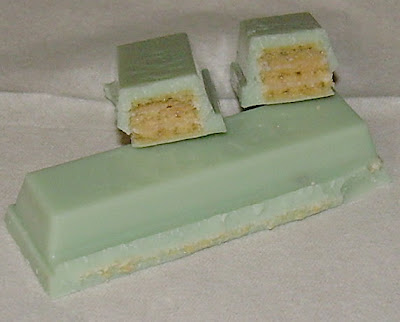 At any rate, it is a logical choice for a summer KitKat release to choose a beverage that is so linked with the change of season in Japan. The choice Nestle Japan will make in terms of flavor is also an interesting one. Given that there is variation in ramune flavors in sweets and sodas, they had some flexibility.

When you open the package, the first thing you smell is bubble gum. The bars are pale bluish-green and about half the length of the usual KitKat finger. I paid 30 yen (about 30 cents) for one mini bar at 7-11. You can buy big bags of these for about 300-350 yen ($3-$3.45) and get 20 bars at once, but I preferred to pay more and get less for an unknown candy.

The first bite of this is of distinct and clear, but good, bubble gum flavor. Despite being a white chocolate-based KitKat, it's not overpoweringly sweet. The finishing flavor is like fizzy sour candy that you had as a kid. You know, the sort which you got for Halloween and put in a glass of water sometimes to see how it dissolved and then if you were really brave, you drank the water.

I thought this was pretty good and my husband loved it. In fact, he's considering buying a whole large bag of the mini bars to keep around as a sweet at work. I'd definitely buy these again, though I probably won't have the chance given how short-lived these specialty flavor KitKats seem to be these days. If you can sample this, I'd recommend you do unless you really dislike bubble gum flavor.

All that talk about European cheesecakes reminds me of their "kasutera" the famous Japanese un-Japanese cake!

The colour of the chocolate is a bit weird, it's not really blue, it looks wishy washy.

It's funny because the very name "castella" sounds Spanish (it's actually Portuguese), but most people assume it's Japanese because it's so popular here. I've actually never been much for castella. It's okay, but the texture and odd stickiness just never did much for me. Part of the problem may be that there is a lot of bad castella in Japan and I may have been unlucky with my exposure to it. My husband, who likes cake and sweets, has also never really taken to it.

I think you'll like this if you like the flavor of plain, pink bubblegum. It's one of the weirder KitKat flavor choices that actually seems to "work".

I've never been much of a fan of kasutera either. I remember going to Japan and being taken to a cake shop by some of Yasu's friends and they bought me kasutera, and I was so unimpressed because it's essentially nothing more than a sponge cake. Here I was imagining we were going to be having something really Japanese like mochi or dango, and I got stuck with something I could make at home.

I used to drink Ramune when I was a kid in the 70s, the marble sort of made it hard to drink but when you're a kid it's more a fun novelty than a hassle. I tried it again a few years ago and I wasn't so impressed. =) Ramune and kitkat sounds like an odd combo, but I wouldn't mind trying it.

Bryan: I've read that the marble does make it challenging to drink. I wonder if kids want to break the bottles and get the marbles out to play with. I know I would!

I think all sorts of stuff used to seem good when we were kids, but now, not so much. Our tastes really do change!

It's kind of amazing that Nestle hasn't done a Ramune KitKat until now! But because of your review, I will definitely seek out this one. Because it seems to have just come out, I'm gonna guess it'll still be available next month when I visit Kyoto...

The marble isn't too bad, because one side of the bottle is "pinched" so if you hold it a certain way, the marble stays in place. I did get the marble out once, actually, but then I didn't know what to do with it.

I don't suppose you happen to know what recipe is used to make Shokupan? At least, I think that's what it's called. I tried to find a recipe for it, before, but when you don't read Japanese (except for being able to recognize the characters for Jasmine Tea... BLECH!), it's rather difficult!
I just know the bread is somewhat elastic, and very pillowy soft, and you can buy it in, for instance, the bakery inside a Jusco. (I'm sure there are different ones, but I don't know the name and I pretty much only shop at the one Jusco close to us.) Also the bread is square. And costs around 250 yen per loaf. It's positively wonderful, and made me realize that American bread, like Wonder Bread, etc, is just awful. I had to stop buying bread off-base since I don't know how to make it myself, and when we move I won't be able to get it, so I had to wean myself off of it! Sad but true!

Hi, Melanie. I think Shokupan is really just plain old European white bread for sandwiches (pain de mie). That being said, I don't eat any white bread anymore. I make my own whole wheat bread in a bread machine (because you can't get whole wheat in Japan easily).

I haven't tried it, but here is a recipe in English:

Follow usual bread-making procedures when you mix it up and knead it.

Or, you may want to try this pain de mie recipe (as I'm betting it's essentially the same thing):

Orchid64 (I don't know your name, so that will have to suffice for now!)
That recipe looks like EXACTLY what I need... right down to where I can go to buy the specialty pan you need to make it! :) Thank you! As soon as I can convince hubby to let me get one of those pans (Good gravy it's pricey!), I will be giving that recipe a go!

I love ramune, when I first tried some it was in Asakusa late Summer, and it was delicious. It didn't taste chemically at all, it seemed very naturally flavoured. It came in unlabelled bottles from a street vendor, and was one of the most refreshing drinks I've ever had.
I've since got some back home in England from our local Asian supermarket, which is a brand-name variety (although I can't tell you what the name is – my katakana isn't very good yet). It's nice, but a bit chemically. Interestingly, this brand has an unscreable cap that keeps the marble in – meaning kids don't have to smash the glass to get it out and play with it.
I got some ramune kit kat for Christmas from my fiancee, and I think they're delicious. Can't eat more than one at a time, as they're too sweet, but they're a tasty quirky treat.
Thanks for the post!

Hi, Rob, and thanks for reading and taking the time to comment! I've never bought a bottle of real ramune. It's one of those things I never got to, but you're inspired me to try as soon as they show up this summer!

I just managed to open my first bottle of Ramune! It took me a week to work out what fun we have had!! i ripped off the wrapper, chucked it away & was stumped. It made rounds at the office, no one could work it out. I bought it home & the very very strong boyfriend struggled with it. finally we opened it tonight, using a pen knife, a tin opener, a stanley blade, a bread knife, a screw driver, pliers & a spanner!!
YES! It's now been drunk & my boyfriend has a free marble for his trouble. My mate who is also a Japanese Junk freak (we're in the UK) found me a video. Oh its in the wrapper!! LOL ~ cant wait to send my b/f to buy me ramune kit kat for xmas!! Cheers everyone!!! =o)

Sazdenny: I had no idea they were such a chore to open (I've never bought a traditional bottle of ramune)! Thanks for sharing your story and for reading. :-)

where do you get this from? i'm in the US and i want some