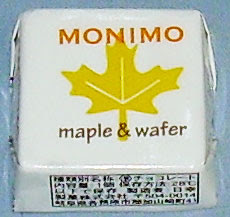 I love small portions for sweets, and I definitely live in the right country for buying things in small quantities. One of the reasons I review so much Tirol chocolate is that it is sold in roughly one inch (30 mm) square blocks that are individually wrapped and sold for a small price. This means two bites, a few calories, and no temptation to overindulge. By and large though, Tirol has been the only manufacturer to regularly offer such small morsels for individual sale.

Because I like a company that offers its products in a fashion which saves me from myself, I was happy to come across Monimo brand squares which appear to be a knock-off of Tirol types of candies. They are the exact same size as Tirol Premium chocolates and about the same price. The company that makes these is Nikkoh Co., Ltd. which is located in Gifu, Japan and was established in 1954. In addition to a small line of chocolates, they make jellies (what we call gelatin) and bottle beverages like ramune (a kind of Japanese soda) and cream soda. 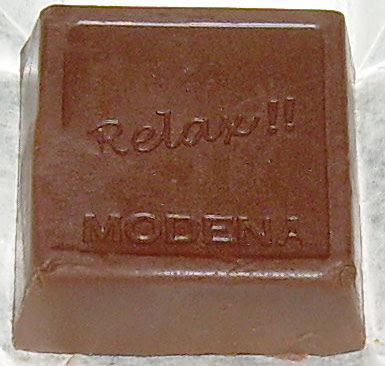 These chocolates come wrapped in the exact same fashion as Tirol candies. That is, they are wrapped in foil-lined paper and then in a thin layer of plastic with nutritional information large folded under the candy. This particular chocolate was 59 calories. Unlike Tirol, it's not stamped with a design but rather with a message to "Relax!" I have no idea why it says "Modena" on it, but it is interesting to note that it is the name of a breed of "fancy pigeon". Let's hope that has nothing to do with the candy's ingredients. 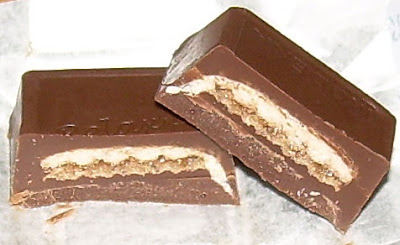 Since spring is here and it's warm and humid all the time, my candy melted just a little en route to my apartment. I put it in the refrigerator immediately, but the chocolate is on the soft side even when kept quite cold. The candy smells like regular chocolate. There isn't a hint of maple in the scent at all. The chocolate itself tastes somehow cheap. Even though it is made with cocoa butter, that ingredient comes pretty far down the line.

The chocolate has that familiar bittersweet chocolate aftertaste that one often finds in Japanese chocolate, but it's a bit stranger than usual. I think that slightly funky aftertaste comes from the maple flavor in between the wafers. The problem is that there is so little wafer and so little maple flavor, that you can't tell exactly what it is. The wafer is crispy and nice, particularly as a pairing with the soft chocolate coating, but ultimately it's just not that impressive.

This wasn't bad by a long shot, but I definitely wouldn't choose to revisit it. If I had known what it was like before purchasing it, I probably wouldn't have bothered. It's not the least bit offensive or anything. It's just not all that exciting or delicious. On the bright side, it didn't appear to taste anything like a fancy pigeon.

Did you know there is a kind of wood called Modena, that is made from the maple tree? I think that may be why they have "modena" written on the top, though how it ties in with the chocolate, I'm not sure.

I hadn't heard about the wood called Modena, though it may have been one of the hits that came up when I did a search. ;-)

I've sometimes wondered as you have if the Japanese have greater brand name recognition of these types of things than we do. I imagine that there must be some traditional snacks which are the equivalent of "off-brand" products in the U.S. For instance, Hostess snack cakes is the premium brand, but the cheap brand is "Little Debbie." I'm guessing that there must be the equivalent type of situation in Japan.

Hmm. I love the idea of combining maple, which is my new favorite flavor, with chocolate. You've inspired me! I'm sure I'll do better than Monimo.

I really like how you give a flavor--figuratively as well as literally--of what life in Japan is like and how it can challenge American assumptions.

Oh, and as a proud redneck woman from Florida, I grew up on Little Debbie and barely acknowledged the existence of anything else! Only when I came up to NYC did I realize that others consider Little Debbie "cheap." I still don't like Hostess or Drake nearly as much.

Hi, CrackerLilo, and thanks for commenting.

I grew up pretty poor so I also had Little Debby rather than expensive brands. I actually prefer it now, not that I see it very often!