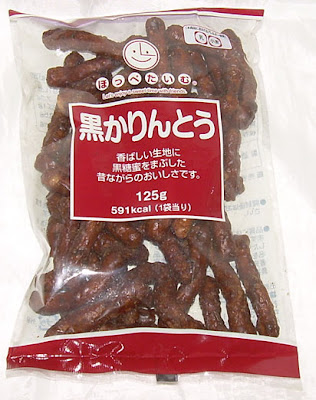 Karinto is a traditonal snack in Japan which is deep fried and coated in brown sugar.  Other flavors are also available, but the type you see most often, which resembles something you'd find floating in an unflushed toilet, are these brown sugar varieties. You can find karinto sold pretty much anywhere for a low price. I found mine at Okashi no Machioka discount snack shop in their 100 yen ($1.19) snacks area. This is a pretty typical price for karinto. The manufacturers vary, but most of them are not big companies, have no web sites and use relatively generic packaging, as was the case with the maker of my version.

This is a quintessential example of Japanese junk food as it is essentially a type of fried doughnut-style batter loaded with fat and sugar. These are not a low calorie traditional Japanese snack by any stretch of the imagination. Each piece is approximately 13 calories and is 6 cm long (2.4 in.) and just under 1 cm (.4 in.) wide. The entire 125 gram (4.4 oz.) bag is a whopping 591 calories. The first ingredients are brown sugar, sugar, and then flour. 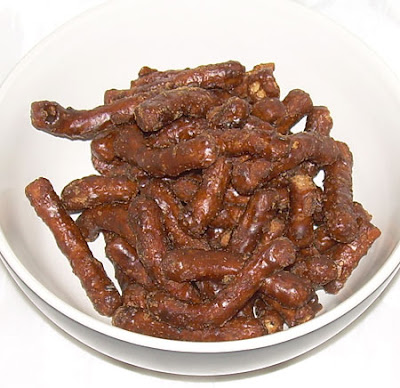 They smell like a slightly burnt brown sugar donut with some unexpected ingredient which you can't put your finger on. They taste like a deep fried corn snack, like a Cheeto, with brown sugar saturating it at every level. There is a strong flavor of oil and an aftertaste of pure brown sugar. There is also a modest burnt sugar flavor going on.

Though not horrible, there was something about these which hit me as very, very wrong. My guess is it was the oiliness of them and the very sugary nature coupled with the corn snack style texture which I think results from them being a bit like a very dried out doughnut. They had a strong taste of having been fried in oil that had been used a lot and being saturated with oil. The texture was both soft and hard at the same time. I guess that is because they are deep fried, but sugary.

I don't believe that anyone who tries these will hate them, but I'm not sure that they'll love them either. There is a real sense of disharmony to karinto for me in which the elements are all fine or inoffensive, but they come together in a package which doesn't seem right. I also feel like they are really, really poor on the calorie cost to food pleasure ratios, and I almost certainly won't finish the bag and definitely won't buy them again.

I love karinto! Malty and crunchy and yummy. They take a bit of getting used to on the aesthetic front, but taste- and texture-wise, they were an instant hit with me.

It sounds like the karinto you had were very oily, and perhaps not the best example of the breed. I'm used to karinto that isn't overly greasy, and I can imagine that makes a huge difference...

I think a lot of people love it, and I may have gotten a bad bag (this was hardly good quality stuff!).

Mainly, it just seemed too sugary to me as well, but I should try some better quality stuff some time!

I found my cheep 100 yen bag to be not oily, but delicious. Not too sugary, but just right. Bit burned tasting.