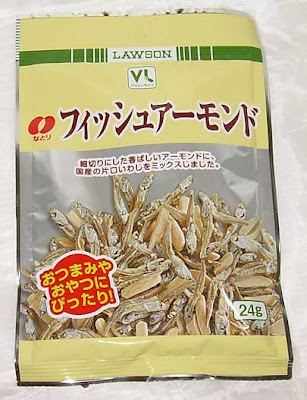 There are a lot of disgusting looking dried up seafood snacks in Japan which I have always sworn I would not touch with the proverbial 10-foot pole... then I started doing this blog and got the bright idea of doing reviews of the weirder things which I have shied away from. I figured that I could stretch my palate a little and push the boundaries of what I'll eat, at least a little.

While perusing all of the odder looking bits, I considered the leathery bits of octopus and the stringy bits of eel. Knowing I don't like those types of seafood at all convinced me that trying them would be a pointless exercise in handing out "very unhappy" ratings. I decided that I would try the omnipresent dried fish snacks because, though I'm not a fan of fish, I don't hate it. At the very least, it might be "so-so", and this version with almonds might go down a bit more easily because they're my favorite nut.

You can find dried fish snacks nearly everywhere in Japan. They are particularly popular as otsumami or snacks marketed to be consumed with beverages (and alcoholic ones in particular). I got this at Lawson 100 shop for 100 yen ($1.17). It's a 24 gram (.85 oz.) bag and the entire thing has 126 calories and 9.3 grams of protein. These are pretty healthy, and I was once told by a student that this was the only snack she was allowed to eat as a child because she had bad teeth and her mother didn't want her eating anything with sugar. 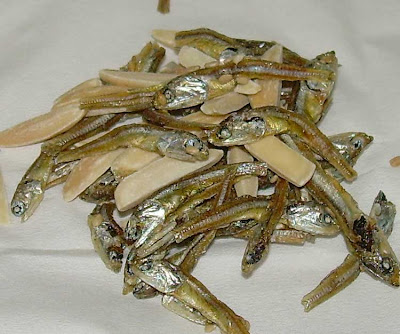 I was all fine on an intellectual level to try these for review, and then I poured them onto a tissue to take a picture before eating. Seeing the little heads that had broken free, and the bits of internal organs through their dried out transparent bodies started to really turn my stomach. It's not eating fish that is the problem so much as eating every little bit of the fish. I had some serious second thoughts about my choice. At least the squid cheese strings don't look like squid, and the dried out octopus bits are chopped up and don't have eyes and veins. I was really regretting this choice.

I didn't even want to touch them, but I rounded up a few fish and a few almonds, closed my eyes, and put them in my mouth. Unsurprisingly, it tasted super fishy with only the slightest hint of almond. They aren't very salty, but there was a hint of sweetness. This is no surprise since the third ingredient is actually sugar (the first is almonds, and the second, sardines or "iwashi"/いわし). There are also sesame seeds studding the little dried up corpses, but the fish taste is so overpowering that the seeds and nuts flavors are largely drowned out.

This wasn't horrible, but it wasn't great. If I were starving to death and had to eat these, it wouldn't be the end of the world, but I can't see enjoying it casually as a snack or craving it. It is intensely fishy, and there is something peculiar about sugar and fish as a combination. I'll admit that I took one bite and threw the rest away, but that's mostly because looking at them made me queasy. I could have forced down the rest, but I saw no reason to do so.

I must say that I miss your weekend reviews! I spent every day this weekend with a slightly empty feeling, mostly an exaggeration. I respect your right to free up some time and I am ever thankful for your faithful updates to both of your blogs.

I have to give you credit on this one, I could not do it so quickly/easily.

I have to admit this post cracked me up because your thought process was much like mine. "Fish is O.K., how bad can this be?" I was even thinking that the almonds and fish (in the first picture)both had similar kinds of shapes, rounded on one end, pointed on the other, and that they looked well together. Then I hit the close-up. Whooooa, wait a minute, let's rethink this snack! I'd probably try some if it was on offer, but I would NOT look too closely at what I was eating!

I know I couldn't get past those fish heads, how gross. =/

Haha, this is the exact thing I bought at a 100-yen store for a friend of mine, as a joke. I love fish (raw and cooked), but I'm not sure I'd try these.

I can't do these or the little dried shrimp.

EWEWEWEWEWEWEW. I avoid these things like the plague, and I really really love fish. My friend calls the little raw gray fish over rice "fish graveyards," and I just can't stomach them. Although I have a problem with eyes in food in general.

You are far, far braver than I!

The responses here make me think this was an excellent choice to kick off this fortnight of weird foods!

Thanks so much for everyone for taking the time to comment!

Love these, ever so tasty. Blue diamond do a variant of this called calmond

Aw.....loves it! I like dried squid/cuttlefish and these mini fish snacks. Mini crab snacks are also good. My Italian American friend likes these Asian seafood snacks too but yeah it can be weird. Most Americans are used to prepackaged meats without the parts that show which animal the flesh comes from. In Chinatown (NY) we buy whole fishes, whole ducks with the heads etc. so I'm pretty used to it. The bigger the fish is the more disturbing the head gets because you can see the teeth.

Found this blog and reading the back posts - have to comment though - as I'd avoid these and not cause I don't like fish - but because they look exactly like the fish treats I give my cat, and can't for the life of me reconcile that snack food being for people to eat.

I do love the post though as that's exactly what I'd go through to try and get myself to eat one.

haha I had the EXACT same reaction with the close up! I was like looking at the package thinking "oh, not so bad, I might even want some of that" Then I looked at the close up and got queasy thinking about eating it. yuck-a-rama