In the late 19th century in Japan, a host of dishes that could be designated as "bachelor food" were created during the Meiji restoration. They took Western cuisine and modified it to suit Japanese tastes. To this day, some Japanese people think this type of food is what Western folks eat all of the time, and most of it is not very healthy so they assume this is why we're fatter and have heart disease. In Japan, it's called "yoshoku". Tonkatsu, or a breaded, deep-fired pork cutlet, is a part of this type of cuisine. You can also get chicken in a similarly prepared cutlet, and sometimes bacon. It's all very tasty, and horrible for the arteries.

This "Big Katsu" snack is emulating the coating on the outside of the various cutlet (katsu) preparations. Though it's called "big", it's actually a flat strip about 15 cm. x 5 cm. (6 in. x 2 in.) in size. You can find this in the kid's snacks sections of many markets and some convenience stores. It only costs 30 yen (36 cents), so you can imagine that it's not going to be a premium quality snack. The entire slab has 75 calories and a whopping 289 mg. of sodium. 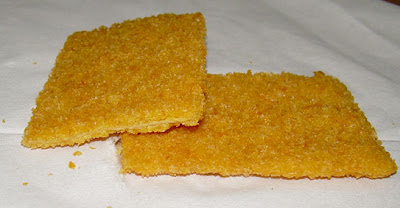 If you've ever bought a filet-o-fish at McDonald's, you know what this snack smells like. It carries a fishy, oft-used oil smell. I'd like to say, something like "biting into this...", but it's very hard to bite off a piece. It's very tough and slightly reminiscent of beef jerky on the texture front. The flavor reminds me a lot of cheap crab cakes that my mother used to buy. These "crab cakes" were mostly seasoned breading with very little actual crab. The main difference between those cakes and this snack is that this is leathery and they were soft. Both those crab cakes and this snack have a spicy, slightly hot tangy aftertaste. The package mentions "special sauce", which I imagine is supposed to emulate tonkatsu sauce. The ingredients list includes oyster sauce, various meat extracts, and curry seasoning which likely contribute to this aspect of the flavor.

I'm actually surprised to hear myself say this, but this doesn't taste bad at all. It feels like the junkiest of junk foods, and the first ingredient is bread crumbs, but it has a nice spicy flavor and some of the better aspects of the coating on fried food. The main problem with this is that it is so tough that it isn't enjoyable to eat, and it really does taste like coating on a Filet-O-Fish sandwich with tonkatsu sauce.

Though not horrible at all, I didn't eat the rest of it and I wouldn't buy it again. One thing that didn't help is that it gave me a stomachache, but also, I'm not a fan of fast food. It really just isn't my type of food. If you want something weird to take home and get people to sample as part of the "weird" food culture in Japan, this wouldn't be a bad choice. It's not likely to see people tossing their cookies on your shoes, but it's "accessible" in terms of the flavors. It is pretty junky, both in flavor and in nutrition. It's hard to believe this is marketed toward kids here, but then again not all snacks back home that are directed at children are healthy either.

Note that there are many of these types of snacks made by various manufacturers. A Japanese person reviewed them and took pictures of them here. Even if you can't read the Japanese, you can get an idea of how many similar snacks like these are out there by looking at the pictures.

Just eating one of those (a japanese friend of mine send it to me). Theyre...interesting at the first bite, from then on, they're not tasty at all, so, totally agree with you.

I'm glad that that was not just my impression. ;-)

Thanks for reading and taking the time to comment!