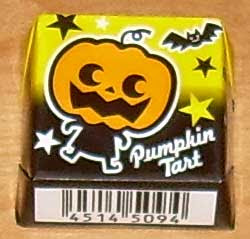 Despite the obvious Halloween motif, the Tirol pumpkin tart candies are still available in convenience stores in Japan. I'm guessing they'll vanish once they're sold out, but for now, you can still buy yourself a bite-sized vegetable-flavored treat.

My husband picked up one of these candies because he loves pumpkin. It's more accurate to say that he loves American pumpkin, not Japanese pumpkin which is called "kaboucha". There's a vast world of difference between the two since American pumpkin as sold in cans and commonly used for pies and baked goods is a careful blend of various types of squash and pumpkin to make the best taste and texture. Japanese pumpkin is just green-skinned Japanese pumpkin and doesn't always blend favorably into treats. The fact that traditional pumpkin pie spices like nutmeg, cinnamon, ginger and cloves are absent from Japanese sweets flavored with kaboucha doesn't help matters. 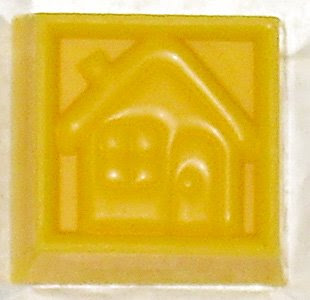 This tiny morsel is about an inch square and is made with pumpkin powder and pumpkin paste. It's a two-bite (well, small bites) candy and is only 48 calories. Like all of the Tirol "premium" candies, it's perfectly molded and quite attractive. Ebidebby also reviewed this and took pictures and her candy had a different picture molded into it so they come with different designs. Oddly, her candy had a rocket design and mine a house. Clearly, they aren't using molds which suit the Halloween theme of the wrapper. 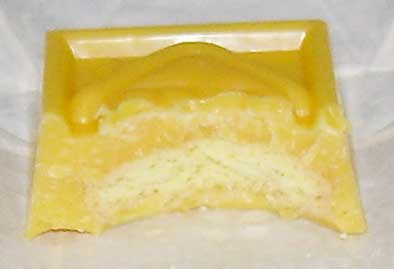 The wrapping for this candy has two pieces, which seems a tad wasteful. There's a plastic outer wrapping with the illustration and a piece of foil-lined paper inside to keep it fresh.When you remove the wrapper, you smell squash and the faintest hints of caramel. Inside, there's a little round crispy cookie in the center. This adds to the "tart" aspect by making it appear as if there is a "crust" with the pumpkin "filling".

The taste of this is very much that of what is called kaboucha purin (pumpkin pudding) in Japan. It definitely has caramel overtones and a very powerful squash flavor. It's not bad, but it's an acquired taste. If you're expecting a traditional Western pumpkin treat, you're in for a shock.

While this isn't the sort of thing I'm inclined to hunt down or eat again and again, it is an interesting experience and I wouldn't mind picking one up when the season rolls around again next year. I do wish, however, that they'd toss in some spices to dilute the strong squash flavors for a more balanced and less esoteric flavor. It's surprisingly overbearing in flavor for a Japanese treat given that the Japanese on the whole favor more subtle flavors.
Posted by Orchid64 at 12:00 AM

I would say that Japanese pumpkin flavours are very similar to ours. We have the Japanese Kent pumpkin in the supermarket and butter nut. I actually prefer the real pumpkin taste without spices, as i think that pumpkin by itself is a full bodied flavour, and i actually prefer japanese-style pumpkin sweets over american sweets that have spices galore.

Thanks for linking my review! I was wondering about the airplane stamped on mine, and the house on yours doesn't make much sense, either. I'm a spice nut, so I prefer American style pumpkin treats, but this one was still enjoyable.

My mom always made her own pumpkin puree (not too hard) and spiced it herself.