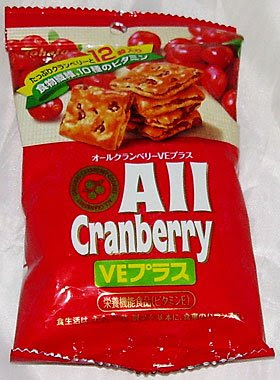 My husband operates from a mindset that would seem to be pretty logical, but doesn't actually work, when it comes to food and how bad it is for you. His notion is that if the food isn't that tasty, and especially if it isn't that sweet, it can't be all that bad for you.

When we first came to Japan, he used to buy Tohato's All Raisin cookies in accord with that type of thinking. They had raisins, which are a sort of dried up fruit and fruit is good for you, and they weren't very sweet. They had no creamy filling, icing, or sugary topping. It turned out though that All Raisin cookies weren't exactly the epitome of healthy eating despite their lack of food fun quotient, and he stopped eating them. 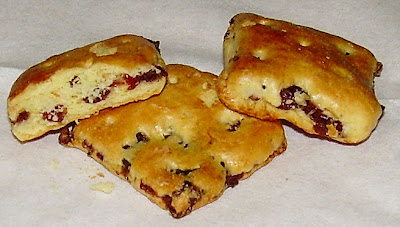 Fast forward to the present and I run across a small bag of All Cranberry cookies made in the same fashion as the All Raisin ones which I haven't sampled for well over 15 years. I love cranberries so I decided to revisit Tohato's healthy-sounding cookie now that it was in a flavor I liked far more than raisin. This packet of ten 3-cm (1.1 in.) square cookies was 98 yen ($1.03) at a local drug store. The VE Plus, incidentally, is for a whole slew of added vitamins including A, D, E, and 4 different B-vitamins and Calcium.

The cookies smell like cranberries, unsurprisingly. The texture of the cookie is rather crispy with some chewiness from the cranberries. The cookie itself doesn't have much of a flavor. It's more of a generalized biscuit flavor than anything else so you're getting the strongest flavor from the cranberries. Besides the vitamins, there are a lot of healthier grains in these including rye and spelt flour and oats. Sucralose is also used as a sweetener to cut back on the sugar added. Each tiny cookie has 16 calories (the entire bag is 155 or so).

I really liked these and would have given them an even higher rating except I though I detected a slight "plastic" aftertaste. I wonder if storing these cookies for 3 weeks in the summer (before opening them) on top of my refrigerator caused some of the plastic bag's chemicals to leech into them. If so, that's an unappetizing thought. It might also simply be some preservative or processing aftertaste from the cranberries that I was detecting. Since I don't like too sweet foods and I liked the texture of these a lot, I would recommend them to anyone who wants something a bit healthier to nosh on.

Note that Tohato has expanded their line of "All" cookies a lot since I last checked into them. In addition to raisin and cranberry, they also carry peach, apple, adzuki, coconut, mango and pineapple. The mango and pineapple are "dessert" versions so they're probably not as "healthy" as the raisin and cranberry versions. Unfortunately, I haven't seen any of these exotic flavors in my usual haunts, but I'll be certain to sample them if I run across them.

This looks yummy. I'd like to try the more exotic flavors over this one tho. Cranberry is a little too standard.

In Japan, cranberry is pretty uncommon! I've been here so long that I was delighted to see anything cranberry on the shelves. ;-)

It looks awesome. It is believed that cranberry juice can inhibit the aggregation of bacteria that cause dental plaque.