As I approach the end of my time living in Japan, my readers may find that I will be turning more to fresh food instead of packaged snacks. That's because I view the coming weeks as my last opportunity to easily purchase such things. Once I go back to the U.S., I will probably have opportunities to buy shelf stable items like Pocky, sembei (rice crackers), and Tirol chocolates, but not refrigerated items. It's a dimension of experiencing Japan that I'm certain I will sorely miss when I'm gone. So, I hope my readers will be tolerant of and patient with seeing a few more reviews than usual of the types of things they may not find unless they're walking the same streets as I currently am.

Of course, whether my readers like it or not, it's highly unlikely that I'd resist trying cheesecake. There are a great many things which I find hard to resist, and the prospect of anything made with cream cheese and cheesecake in particular is going to get my motor revving. On top of that, this is sold by Shigezo, purveyor of "healthy" food based largely on soy beans. After what I said about Japanese food not being as healthy as anyone thinks it is, it may seem odd that I'm buying into that idea, but I'll say that I believe this is wishful thinking on my part. I want this cheesecake to be healthier than the normal stuff so I can feel better about eating it. I only subscribe to the illusion when it suits my fancy. As someone who isn't a fan of tempura, but is a fan of cheesecake, I'm applying selective reasoning here. Indulge me, won't you?

The Shigezo page for this cheesecake is helping me along with my illusions by failing to provide much in the way of nutritional data. They do say that this is made with cream cheese, milk, cream, soy milk, sugar, egg white, gelatin and lemon. The claim is that the use of soy milk reduces the overall caloric value and enhances the nutrition. Since there are no calorie counts given, I'll take their word for it, because, as Fox Mulder says, "I want to believe." 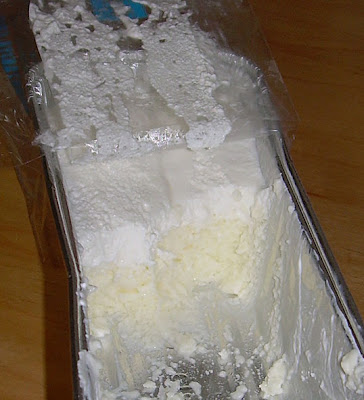 Depending on how you conceptualize "cheesecake" this may disappoint. There is no crust and it is certainly lacking in "heft". Even for a Japanese cheesecake, this is super light and airy. My husband called it more of a "mousse" than cake, and felt that the taste was so mild that it tasted like nothing to him. My taste buds were rather more sensitive to its delights. I could detect cream cheese, soy milk, very mild sweetness, and the ever so slightest hint of lemon. The main drawing point for me with this was the texture. It was very fatty and rich on the tongue, but so light that it melts rapidly in your mouth.

I liked this a lot. In fact, I ate the whole container at once and had to skip lunch. It was a very bad idea as I felt bloated, but I can't say I really regretted doing it just once. I'm sure, however, that it's not actually "healthy", despite the inclusion of soy milk and the lack of heft and sugary overload. It's not a very big container, mind you, but I think more appropriate servings would be three moderate portions and two somewhat large ones. That being said, I'm not sure fans of "real" cheesecake would be quite so keen. I love light, fluffy, fatty things which resemble whipped cream, so this was the bee's knees for me. Your mileage may vary.