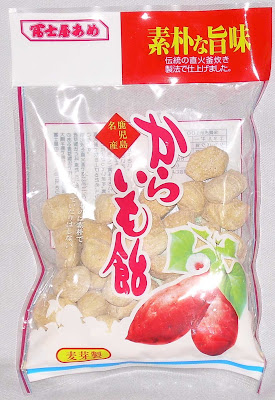 One of the reasons I started this blog was to compel myself to try new things in Japan. I've lived here a long time, and I believe it's easy to fall into a rut and just forget to bother looking around and trying other things. Another was to develop a better understanding of various Japanese foods, their manufacturers, and the nutritional content of those foods. In that spirit, I've been perusing some parts of the food aisles I normally skip over. One of the places I never paid much attention to was the area containing what I would loosely call the "Grandma's snacks."

These snacks are located in a different area from the candy, cookie and chips that are the most popular and well known. The snacks sold there are in packages with less showy designs and the manufacturers are not well-known. Most of them have no English written on them at all, unlike splashy items like "Pocky" and "Crunky" that are dominated by their big, bold, roman-lettered names. Most of these things are less sweet and supposedly carry a better nutritional profile. They're also rarely individually wrapped.

The main problem with this new approach and blogging about what I find is that it's much more difficult to research such snacks as they aren't high profile. In fact, when I tried to research the sweet potato candy I sampled for this post, I couldn't find much about the sweet or the company that makes them. The ony thing I can say is that several manufacturers make the same candy and they all look just like the one I bought with slightly different packages.

From what little I could find out about these candies, they are considered to be traditional and something which is appropriate for families. This may seem like a pretty bland thing to say, and frankly it is. Most Japanese candy has fluffy, bland marketing behind it, but it doesn't always specifically say it's family-oriented. Many big name commercial sweets are purchased by young adults. There's a whole other range of snacks for kids which have a different flavors, sizes and packaging. The snacks marketed at adults tend to come individually wrapped so they can be eaten slowly and shared with coworkers. Even hard candy is individually wrapped in many cases so sharing is easy and careless re-wrapping once the bag is open won't result in the food going stale or sticky. These types of "Grandma's snacks" are clearly made to be opened, sampled, and carefully resealed for future consumption. I'm wondering if some Japanese old folks keep these types of things around the way my grandmothers used to keep around ribbon candy. 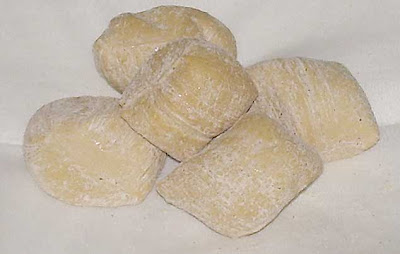 These candies look like a conventional hard candy, but are dull and ever so slightly soft if you squeeze them very hard. They are covered in a fine powder which is not sweet and has the occasional black spec. One of the manufacturers of these types of candies (though not my bag's maker) stated on its web site that these specs are not to be mistaken as dirt or unwanted foreign objects. They are byproducts of the roasting process used to make the candy. I'm guessing the outside powder is some kind of rice, wheat or potato flour which is meant to keep the candies from sticking to each other.

When you open the bag, there is a unusual "spiciness" which you can smell if you sniff very hard. It smells both like and unlike sweet potatoes. I'm guessing that processing them alters the usual scent of Japanese sweet potatoes. The ingredients for this candy are sweet potato syrup , malt syrup, brown sugar, and wheat flour. Though they are not super smooth, they don't feel rough in your mouth, though they are too hard to bite into. You have to suck on them for awhile and they start to soften up and become sticky. Eventually, they develop a caramel or taffy consistency as they are warmed and moistened in your mouth. As they soften, you will naturally start to chew on them and they do stick to your teeth to some extent.

The taste is subtle both in terms of sweetness and sweet potato flavor. They're pleasant, but a little hard to eat and not the sort of thing you're going to go crazy for. I think they're not a bad thing to have lying around to sample once in awhile and they aren't incredibly caloric. The entire bag is 130 grams (4.5 oz.) and contains about 30-35 candies. I didn't count so I can't give an exact number, but I think each candy probably has about 20 calories. Given that they take awhile to eat, you may find that you can satisfy your sweet tooth without scarfing down a lot of calories. I just wish the sweet potato aspect of them was a bit more intense.
Posted by Orchid64 at 12:00 AM

it's times like these that i wish i liked sweet potatoes

LOL! "Grandma snacks" I love it. Sums them up perfectly. I avoid that aisle myself.

Please if you can I have been trying to find this since I was a little girl and left Japan to buy in the U.S.Do you know what stores would sell?